There is something fundamentally chilling about photographic context.

With just a few words, a short conversation or fleeting caption, a snapshot can transcend far beyond what we ever imagined it was capable of representing.

Consider the two pictures above, by David Seymour. It is quite extraordinary just how different we process the images according to their subtitle.

A picture, as we’ve all heard, ‘speaks a thousand words’, and yet it is occasionally the words themselves required to fully appreciate the gravity of an image.

I must regretfully inform those of you who were previously unaware, that Seymour’s photographs were actually taken inside an orphanage for severely disturbed children, after the Second World War. The institution – a Polish centre for youngsters handicapped emotionally by the unspeakable horrors they had both witnessed and experienced – had set the class the task of drawing what the word ‘Home’ meant to them on the blackboard.

In one of Seymour’s many essays vis-à-vis the children of war, he explains how at first his colleagues were flippant, even dismissive of these initial photographs. Indeed, there is no denying that these children have a distinct lack of unhinged distress or mawkish emotion, which, when paired with their relatively ingenuous drawings, does little to ratify a climate of fear or dread.

That is, until, Seymour presented what has come to be known as one of history’s most hauntingly tragic snapshots.

A young girl who had spent more years of her life inside a concentration camp than out.

A young girl who was also caught midway through drawing her own version of ‘Home’.

Tereska was supposedly eight or nine years old when this picture was taken, but her facial expression defies all age and classification. Her eyes are vacant, yet piercing; like so many in this era who had seen too much, she possesses the terrifyingly concerted thousand yard stare. 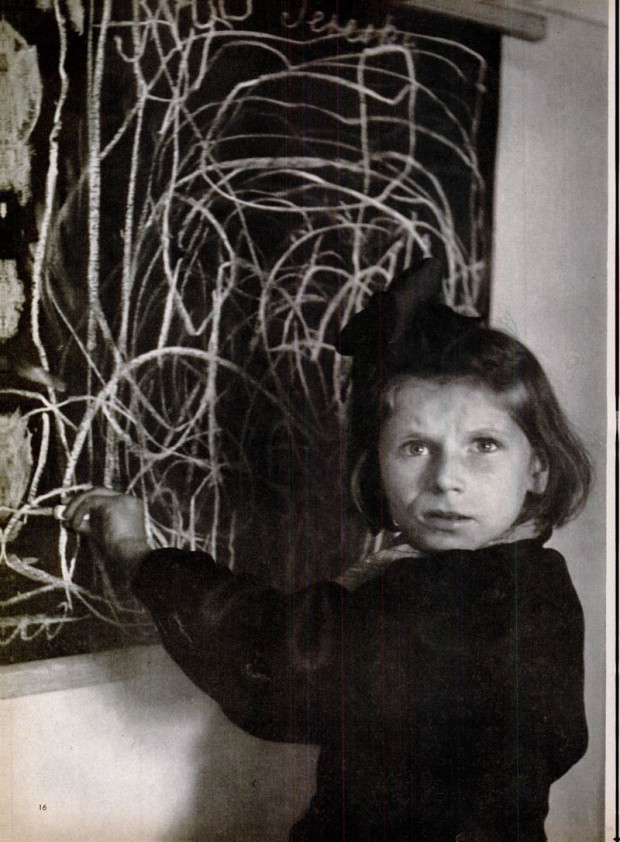 Her drawing amplifies this uneasy atmosphere – a plethora of confused chicken-track lines crisscrossing each other with no apparent uniformity or direction. Her small hand grips the chalk tight, as she is caught scratching her furore deep into the dark slate.

Almost certainly David Seymour’s defining snapshot, this photo has been used to accompany books on fear, childhood trauma and the Holocaust, whilst recently being heralded as an eponymous symbol for the German foundation Tereska.

Yes, Tereska remains one of the few who survived their time at a concentration camp. Yes, she was physically safe and receiving professional treatment at the time of this photograph.

But she was also, in the miserable words of Seymour himself – “A survivor who grew up in a world of fear. Not the healthy kind which a young savage has of the river they must cross – but the fear instilled by the men who kill.”

Say what you will about the quality of this snapshot, but there is one thing the world must surely agree on:

Nobody, especially a child, should ever have cause for that facial expression – and one’s idea of home should never be reduced to tortured scrawls.