Memes are a way of hiding from the ‘real world’, and of negotiating our place within it. In recent years, they have spread beyond the formulaic humour of set images and captions and begun to take on the roles of political commentary and autobiography. They develop and mutate so rapidly, and in such unexpected ways, that certain formats (frog-based humour, for example) can become ubiquitous without anyone being able to fully understand or explain them. In this way they reflect and perpetuate the trend currently resurging in politics of views being shared and spread based on singular policies or slogans. The social aspect of their circulation also means that they encourage people to realise and advertise parts of their identity and political stance. Association with a meme through sharing, liking, commenting or tagging, is public. Memes blur the boundaries between public and private channels of communication. On social media feeds, political memes appear alongside news articles and opinion pieces, forming an important, though overlooked, part of political narratives. Political memes often garner a much wider audience than traditional forms of political commentary. But are they an effective way of widening engagement in social and political issues, or do they inhibit meaningful, sustained political debate?

Political memes are a microcosm of political landscapes, but can also evade their established modes of communication and debate. Instead of laying out an argument, they often convey visceral responses of doubt, mistrust or anger. Since its coinage by Richard Dawkins, popular usage of the term ‘meme’ has moved away from the notion of a unit of “cultural transmission” or “imitation”. It now refers mainly to combinations of text, image and video that form a unit of viral media. Yet, the origins of memes as we understand them today still lie firmly within our social phenomena. Their presence proliferates during times of political uncertainty—as we witnessed like never before during the EU referendum and the US election.

The fluidity of the format can be positive in that it allows people to respond to events with a level of colloquial immediacy that is not possible in the media. Memes invite a wider awareness of critical political issues, and can also allow the public to draw attention to and critique the ways in which the media presents news (by satirising the polemical tirades of conservative political commentator Tomi Lahren, for instance). But while memes allow for fast responses to current affairs, there is little mechanism for debate once they begin to circulate. Narratives and counter-narratives within the meme sphere do not tend to interact on the platforms in which they circulate.

Memes are now effectively a form of citizen journalism; as a result, they form part of the ‘echo chamber’ effect frequently brought up in relation to politics on social media. The tendency of like-minded people to affirm their pre-existent beliefs and avoid opposing viewpoints is reinforced by Facebook’s algorithm, which ensures that posts by ‘friends you care about’ appear before posts from publishers. This is as true for memes as it is for newspapers that propound a specific political agenda and attract a sympathetic audience. 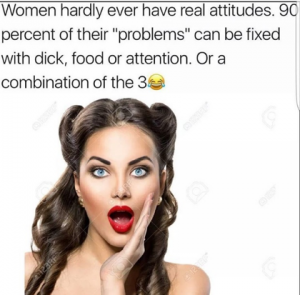 As popular memes are reposted through thousands of accounts (see @fuckjerry, with 11 million followers, and @thefatjewish, with more than 9 million), they become entirely detached from their origins. Once a meme has been copied or rephrased, there is no trace of its authorship. Without a clear source, efforts to make memes popular or relatable can easily result in blameless insensitivity. The problem here is less that memes are taken as truth, and more that they are assumed to be funny and harmless, and so can promote or gloss over racism, sexism (as in Meme A) and homophobia.

Memes formed an important part of online activity surrounding the US election last year. The capacity for humour to coexist with serious political commentary in memes can contribute to the surreality of shocking world events, and makes social reality more difficult to comprehend. The rise of alt-right memes during the election period also revealed some of the frightening consequences of the 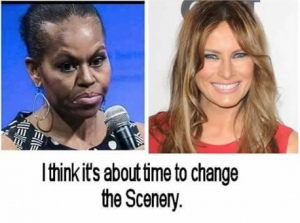 ways in which we use the internet. The surge of memes denigrating Hillary Clinton and Michelle and Barack Obama with strong misogynist and racist overtones (see Meme B) gave voice to a growing sub-section of angry and frightened Republicans. A quick browse on the more hard-line conservative corners of the internet immediately reveals that memes provide a forum for expressing concerns or opinions that go beyond what is acceptable for politicians to say in the public sphere. Concerns about the gender or race of public figures are presented as legitimate points for discussion. The rise of this defamatory content grants those who hold extreme nationalistic views a platform to affirm them amongst like-minded people, whereas those who don’t agree are not likely to encounter them.

Whilst memes may be providing a platform for the aggressions of the disillusioned American right-wing, a new wave of intersectional feminist meme accounts is using the format to promote tolerance and empathy by addressing the specific experiences of marginalised groups. Meme makers such as @gothshakira, @ada.wrong and @goldnosering use memes to expose various facets of patriarchal oppression (see Meme C). They tackle everyday experiences of issues including heteronormativity and mental illness. Within this sphere of the meme world, the ‘echo chamber’ effect does not serve as propaganda, but as affirmation: it allows for a validation of personal experience that is not readily available in mainstream media or culture. These memes convey a message of powerful solidarity in a world that is becoming increasingly intolerant. 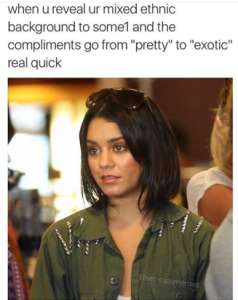 They can also be informative and productive in inspiring healthy debate. Yet, on a viral scale the meeting of opposing viewpoints can become messy. Comments sections on these accounts, for instance, are populated with trolls attacking the feminist rhetoric of their content, often with sexist and racist slurs.

The relationship between digital culture and social movements is still uncertain: in the fluid, virtual realm of viral content, notions of creator and consumer become shaky. Conventionally underrepresented groups can reach a wide audience, but this audience is faceless. In an article entitled ‘Poor Meme, Rich Meme’, artist and writer Aria Dean argues that currently, “the most concrete location we can find for [the] collective being of blackness is the digital, on social media platforms in the form of viral content—perhaps most importantly, memes”. However, as Dean acknowledges, social media is also an unstable location: moments of connection can be ephemeral, and their interruption or appropriation by members of dominant social groups reinforces the power relations of ‘real-world’ politics. Memes allow liberation politics and bigotry to flourish alongside one another within the single cramped environment of a ‘Discover’ page. But, importantly, they open up the field of representation to those who are usually denied it. They can be harmful in amplifying voices of fear and hatred. But as vehicles for humour and compassion, they can also provide a voice more understanding and human than that of the media.