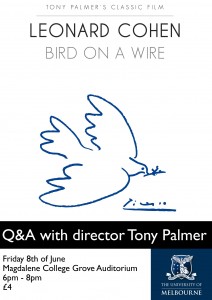 ISIS presents a screening of the classic documentary about Leonard Cohen’s 1972 European tour: ‘Bird on a Wire’

Featuring exclusive Q & A with the legendary film maker himself: Tony Palmer

Tony Palmer’s lengthy and prolific career has seen him make documentaries with The Beatles, Jimi Hendrix, Cream and Frank Zappa, and win over 40 international prizes for his work including 12 Gold Medals from the New York Film Festival as well as numerous BAFTAs and Emmy Awards.

For just £4 you can watch the film AND speak and listen to the man behind it. Don’t miss out.

Sponsored by the University of Melbourne