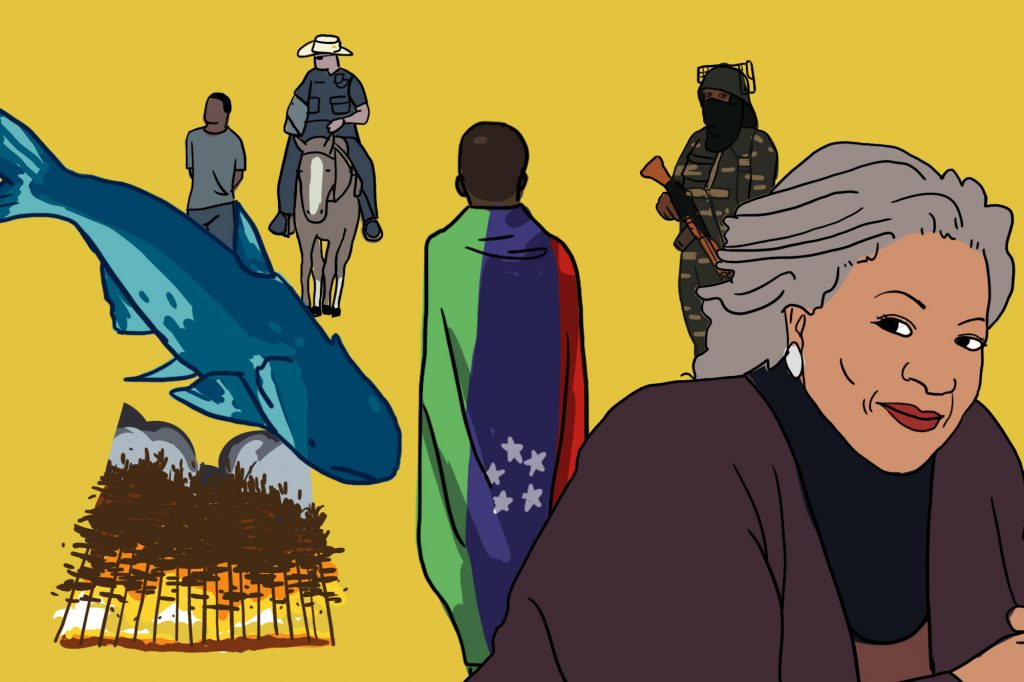 On Monday night, the police chief of Galveston Texas, Vernon L. Hale III  apologised publicly after footage emerged of mounted police leading a black man along the street by a rope. He said: “First and foremost, I must apologize to Mr. Neely for this unnecessary embarrassment. Although this is a trained technique and best practice in some scenarios, I believe our officers showed poor judgment in this instance and could have waited for a transport unit at the location of arrest.”

To most onlookers the symbolism is undeniable, but it seems the two officers involved, P. Brosch and A. Smith will not face disciplinary action. In the days since the spreading of the video online, relatives of the man being led have said that he is both mentally ill and regularly sleeps on the streets. They argue that the officers should have been aware of this. Chief Hale did note that immediate action had been taken towards the suspension of that technique. But the question remains, what did they think they were doing? – Scarlet

On Tuesday Nobel Laureate Toni Morrison died, aged 88. Her death was the result of pneumonia complications, and she passed away in the Montefiore Medical Centre in The Bronx, New York.

Born in Ohio in an integrated town, but still the only black girl in her first-grade class, Morrison graduated and enrolled in Howard and then Cornell University, before working as an editor in New York for Random House. She went on to win a Pulitzer, the Nobel Prize for literature and a Presidential Medal for her novels.

Her most acclaimed novel, Paradise (1998), tells the story of Ruby, a small Oklahoma town, and its societal beliefs, religious attitudes, and perception of race. Just like Paradise, her body of work is known for its fierce analysis of American society, never reluctant to explore the inherent prejudices of her characters’ and her readers’ worlds. Her legacy is a platform of amplified African-American stories, and finely-crafted prose which reflects on the political violence of human existence, as well as the humanity behind its politics. – Annabelle

For the last month Ethiopia has been gripped by a constitutional crisis over demands from the Sidama, the country’s fifth-largest ethnic group, for internal secession. The conflict has turned violent, with at least 25 people being killed in clashes between Ethiopian security forces and activists, on 22nd July. The conflict also highlights the flaws in Ethiopia’s federal constitution. The Ethiopian constitution is nominally based on ethnicity, and divides the country into nine internal states. Yet while Ethiopia is home to some 80 defined ethnic groups, only five of the states are home to a dominant ethnic group, with the other four being markedly multi-ethnic. Furthermore, some of the largest ethnic groups, such as the Sidama with around 4 million members of the community, have been denied the status of an internal state, while the state of Harar is home to the Harar community of just 300,000. The conflict came to a head after months of agitation on 18th July when members of the Sidama community tried to secede from Ethiopia and create an independent state.

Though a precarious peace has been restored, the conflict is far from resolved and highlights the fragility of Ethiopia, the second most populous nation in Africa and a growing economic power. – Basil

Kashmir is a Himalayan region claimed by both India and Pakistan. It has been controversial since the British Partition of India in 1947, when there was disagreement over which country it ‘belonged’ to. Subsequent war between India and Pakistan meant the two countries came to control different parts of the territory. Kashmir has been a flashpoint between the two countries since. This was one of the reasons for a huge outcry when a few days ago, Indian Prime Minister Narendra Modi declared that Article 370 was being scrapped. This was accompanied by tens of thousands of Indian troops being deployed in Indian-adminstered Kashmir, and a telephone and internet blackout. Essentially, Modi’s decree means that Kashmir is losing autonomy over its own laws and constitution. Moreover, people from outside the state can now purchase property or settling there. Many speculate that this is a part of Hindu nationalist PM Modi’s plan to alter the largely Muslim demographic of Kashmir. It has also been said that he is trying to distract from the poor economic situation in India currently. The international response has been mixed. In Britain, there have been some calls for politicians to speak out about the crisis. Notably, Dr Priyamvada Gopal laid down a few facts around the issue on Channel 4 News. Either way, this issue is far from over. Kashmir remains under lockdown, and a solidarity protest is planned in London.  – Anon

The battle against Siberia’s fires

Siberia’s wildfires, although common every year, have been especially uncontrollable this year due to this summer’s heat waves and strong winds. By now, the wildfires have spread across a shocking 4.5 million hectares, driving Russian authorities to announce a state of emergency in the Irkutsk region and environmentalist scientists to label the situation an ‘ecological catastrophe’. Although it has been difficult to reach the fires because they are blazing in remote areas, Russian emergency services have been attempting to help the situation by pouring water from helicopters, with only some positive results. Russia’s Ministry of Defence stated that 753,000 hectares of wildfires were put out by the air force in four days; nonetheless, it seems that the wildfires are now out of control. According to Gennady Esin, they may continue burning until the first snow falls in the area. Not only is this environmental catastrophe resulting in enormous amounts of CO2 being emitted, it also affecting habitable areas of Siberia, with residents reporting they feel it is “becoming hard to breathe”. – Gerda

Giant river-animals on verge of extinction?

On Thursday 8th August, a report published in the journal Global Change Biology revealed that there had been a decline of 88% in freshwater animal populations from 1970-2012 – twice the loss of vertebrate populations on land or in the ocean. The study, undertaken by scientists from the Leibniz Institute of Freshwater Ecology and Inland Fisheries and their international colleagues, was the result of an analysis on populations of enormous freshwater animals in rivers and lakes across the world, using data on 126 large freshwater species from 72 countries. Even more worryingly, the study also discovered that, out of over 200 species of freshwater megafauna, 34 are classified as critically endangered on the International Union for Conservation of Nature’s Red List of Threatened Species, although researchers suspect that many more are equally at risk, due to a lack of data on certain species. Many of these endangered species are keystone species, meaning their loss will have a domino effect on the rest of the ecosystem and prompt even more extinctions.

Researchers believe the falling populations to be largely a result of human activities. Freshwater megafauna are often targeted for meat, skin and eggs, and the water in which they live used for crops. Furthermore, man-made dams block access to areas for feeding and spawning. Despite the monumental disruption it causes, there are currently 3,700 large dams planned or under construction, over 800 of which are located in biodiversity hotspots of freshwater megafauna, such as the Mekong, Congo, Amazon and Ganges. The report revealed some good news, however, with targeted conservation actions resulting in stable or increasing populations of some megafauna species in the USA and Asia, although this has not been successfully replicated in Europe. – Charlotte ∎