N.B. These works exist only as digitized photographs. All original material has undergone natural auto-destructive processes of weathering, decay and deterioration and/or human-induced destruction.

Behind each image is the story of a life. Each photograph, a “story from the Anthropocene”, documents and summarises a real-life past or predicted moment in the Anthropocene era. The earliest story chronologically is that of the now-extinct Rabbs Treefrog, the last known example of which perished in 2007. One figure is representational of the victim of a nuclear waste leakage in Greenland in 2095. It was presumed that this nuclear waste, these deposits from ballistic missile tests, would be forever entombed under the Greenland ice after being left there in 1959. The sculpture realizes the potential damage to organic life that will ensue if and when this waste is melted out of the ice due to climate change.

The figures were crafted out of natural clay, but the substances which contaminate, or alternatively, hold the figures together to prevent collapse, were man-made. Clay is the choice medium of expression because the sculpting process is one which constitutes a direct relationship between the human body and the earth: the sculptor is molding, imprinting, removing and adding. Clay, as a natural substance, is subject to natural processes of degradation; left exposed in air for long enough, the material will simply crumble to dust. Firing clay makes it impervious to decay by time and by natural elements such as water. Leaving the clay unfired gives the figures a life-span, makes them akin to living organisms. Each sculpture, like all living creatures, had a specific and limited life-span.

Some of the works have undergone natural processes of decay, some have been physically abused, and all have undergone processes of preservation in order to represent the varying degrees of damage and repair which human beings are capable of inflicting on natural organisms. The final process of preservation was the photographic one, which digitally captured and immortalized the decaying figures. The Anthropocene is the geological era in which humans are the primary influence on the environment; but, as these sculptures remind us, humans are themselves part of this environment. We cannot prevent the damage we inflict from impacting us. 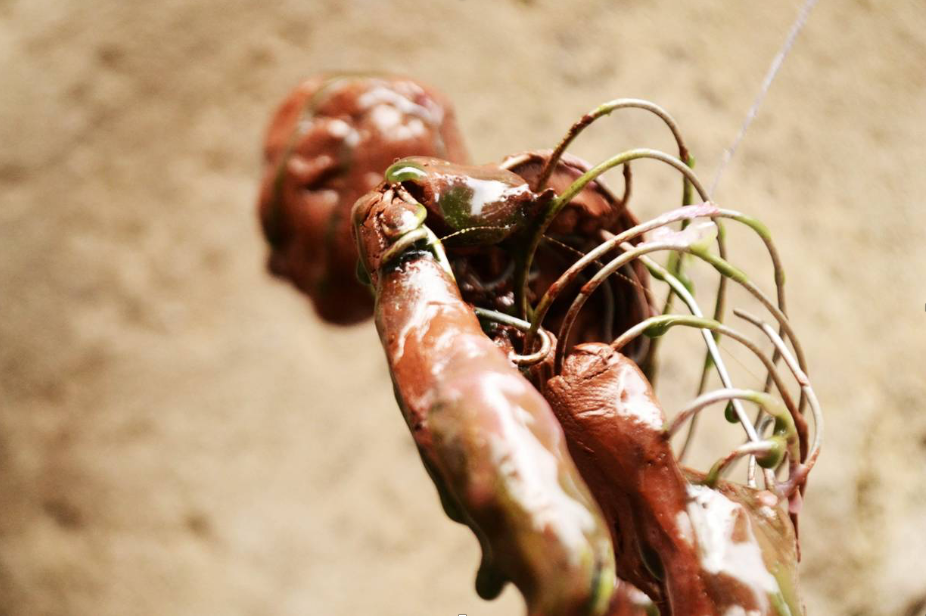 Twenty-Six is a representation of the Rabbs Fringe Limbed Tree Frog. The last known example of the species, Toughie, was found dead in its enclosure in the Atlanta Botanical Garden in 2016. The Rabbs Tree Frog was the only known species in which the tadpoles derive nutrition from feeding on the skin cells of the father’s back. 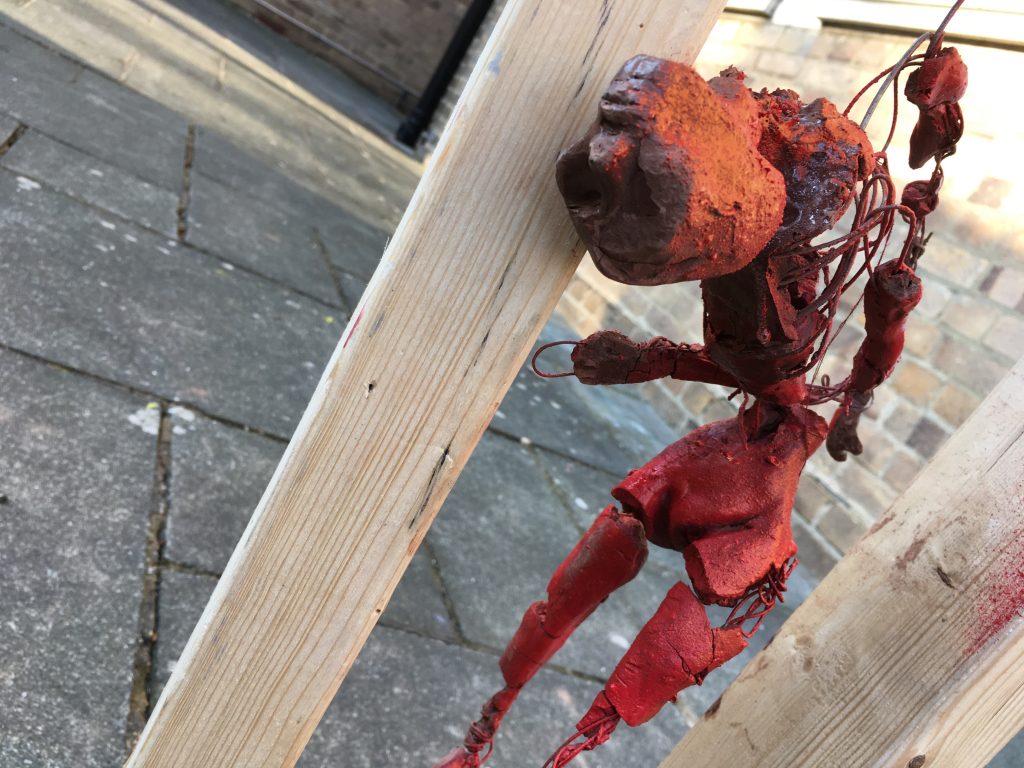 A representation of a young woman disfigured and blinded by the atomic bombing of Hiroshima in 1963. The work is based on a photograph taken in Hiroshima by Swedish photographer Christer Strömholm. The black-and-white image depicts a young girl with wide, white, blinded eyes, “eyes that have seen the light of a thousand suns”. The photo went viral on Reddit under this title, but it is uncertain where the name, however appropriate, was sourced from. Instead of large unseeing eyes, the figure depicted in Eyes That Have Seen the Darkness holds empty sockets: the clay eyeballs were gouged from the face a day into the drying process. 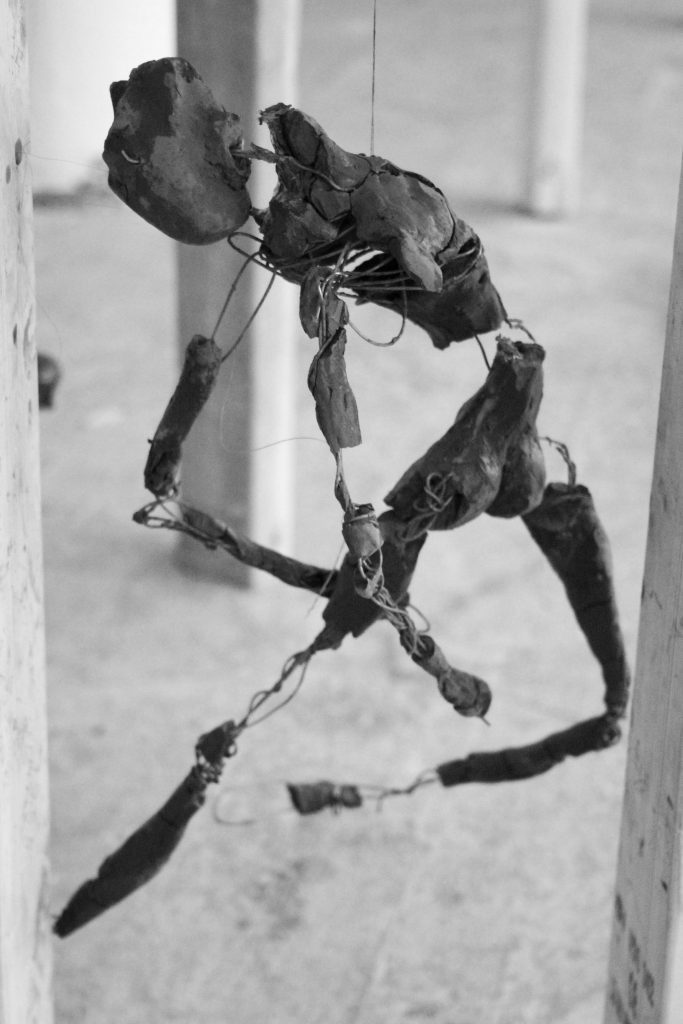 Eyes That Have Seen The Darkness (i) is a representation of a victim of a nuclear attack during the moment of the blast. The figure is hovering in mid-air, poised like a dancer. The structure is held by a single string from one point in the thorax. The photograph is captured as the sculpted figure rotates slowly in mid-air. 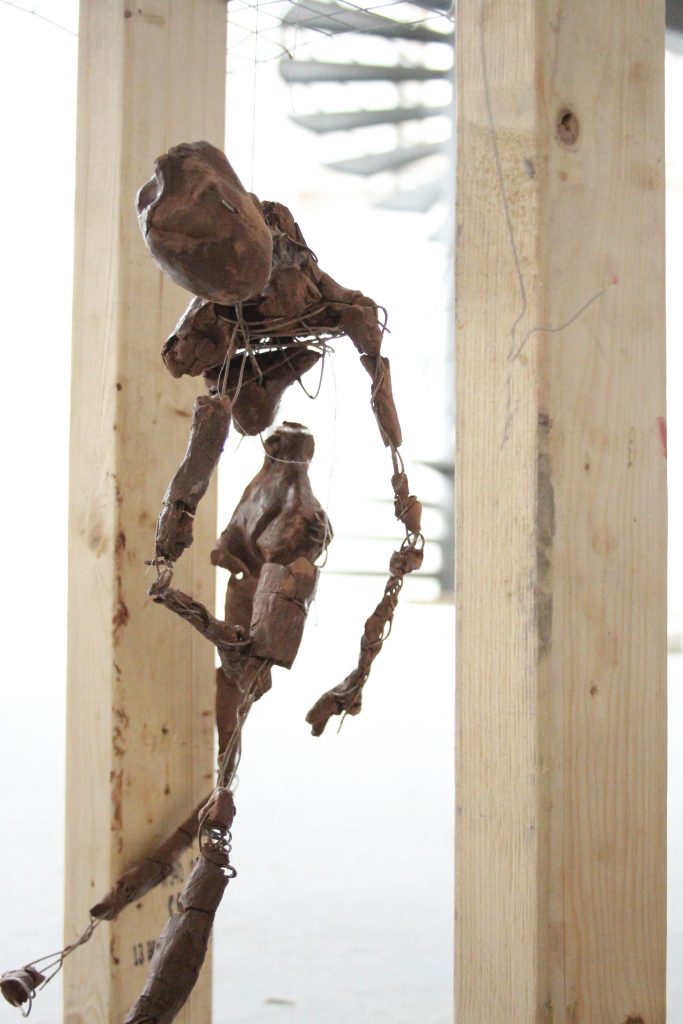 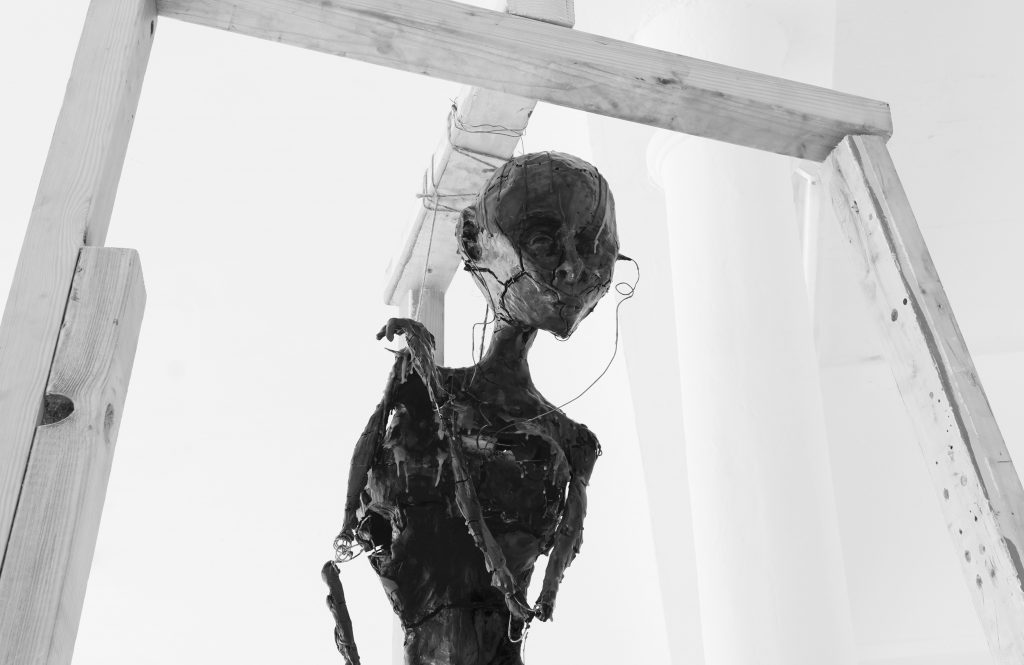 The victim of a 2095 nuclear waste leakage in Greenland. Like the damaged and melting glaciers, the figure’s surface exhibits large cracks which threaten structural injury. Hot wax and multiple layers of adhesive spray have been poured into these cracks in an attempt to hold the structure together. The wax is integral to the structure and an excessive contaminant. 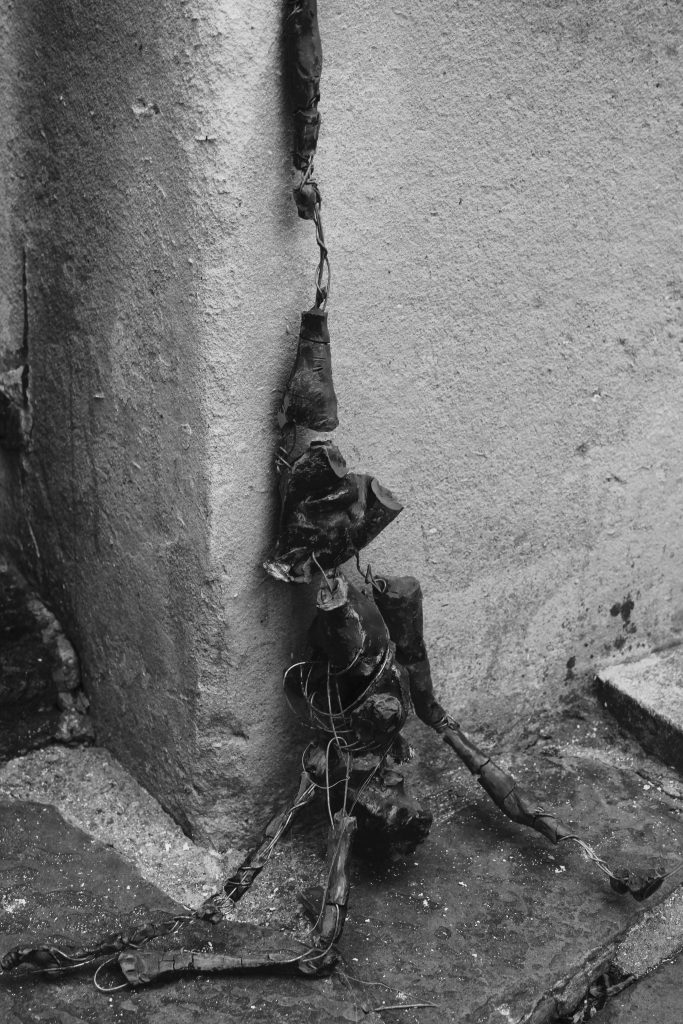 This figure is the unwitting victim of a U.S. Drone strike in Afghanistan in November 2018. This month shows the highest number of drone strikes to date in Afghanistan, with the Bureau of Investigative journalism reporting at least 494 attacks. Predator drone attacks carried out by the U.S. military from remote bases in America on militant and civilian victims — including children — in Pakistan, Yemen, Afghanistan and Somalia are often referred to as ‘bug splats’ by drone operators. According to the Bureau, whose mission is to “hold the White House to account” for the deaths of innocent victims in these countries, between 774-1683 civilians have thus far perished due to U.S. drone operation.

Click here to view Stories From the Anthropocene: Part 1 ∎

Words and images by Juni Ham.