In yet another step backwards for America, The Supreme Court have granted President Trump his transgender military ban. Announced first by a ‘surprise tweet’, this ban blocks individuals who have been diagnosed with gender dysphoria from serving in the US military.  The only attempt at justification is ‘expenses’. This is a further devastating blow to Trans rights in America, where protection for Trans workers under the civil law has already been rescinded by the Trump administration. Leela

The Academy Awards nominations have been announced and the results show some positive change in representation. Yalitza Aparicio, star of Alfonso Cuaron’s Netflix-backed Roma, is the first indigenous mexican woman to be nominated for an Oscar. While  it’s been a pretty good year for diversity by the standards of the last decade, there’s still change to be seen. The Best Director nominees were, once again, exclusively male. You can see a full list of nominees here.  Antonio

In harrowing news, Brazil’s first and only openly gay congressman Jean Wyllys announced that he had left the country this week and has no plans to return due to the rising number of threats against his life. Following the murder of his close friend and gay Rio councilwoman, Marielle Franco, Wyllys’ decision is understandable. Franco was one of the most popular lawmakers in Rio and her murder was seen by some as a symptom of the rise in homophobia in Brazil following the openly homophobic rhetoric of Jari Bolsonaro’s election campaign. Antonio 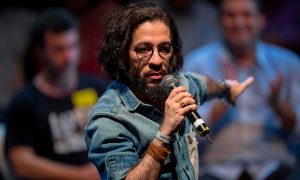 A festival that had flawless marketing and not much else. Someone has talked to you about it at the pub already. Personal highlight was Billy spilling bud light over a map and the logistical plan, a succinct metaphor for the whole ordeal. I got my ticket for next year already, from this guy – Frank Tribble? Louis

The Holocaust Memorial Day Trust have released disturbing statistics that suggest 5% of Brits don’t believe the Holocaust happened and 8% believe that it was exaggerated. The Never Again Expo at the Oxford Town Hall offered a timely reflection on a genocide which seems to be fading from our collective memory at alarming speeds. Down the road from the exhibition, the Union invited Front National’s Marion Le Pen to speak. She spoke admiringly of her grandfather who denied the holocaust – on that count he was only guilty of a ‘needless provocation’ according to Marion. Jorrit

Kamala Harris is running for office! Surprise surprise, there’s suddenly a million articles out there interrogating every slice of her existence. I’ll leave you to peruse them. Despite marketing herself as a candidate ‘for the people’, she’s come under fire for her role as a state prosecutor. In this role, she actively campaigned against legalising sex work and worked to strengthen the institutionally racist state prison system. Basically, she’s not as radical as you might think. Regardless, here’s to smashing as many glass ceilings as we can in 2020. Leela

On Friday night, Banksy’s tribute to the victims of the Bataclan terror attack was stolen. The work, painted on an emergency door at the Bataclan venue, depicts a woman in white. She appears to be mourning. The estimated worth of the piece is in the millions. Ninety people were killed during the 2015 attack — the most damaging of a series of coordinated attacks in Paris — at an Eagles of Death Metal concert, with many others critically injured. The Bataclan described the work as a “symbol of recollection belonging to us all”.  Juni ∎ 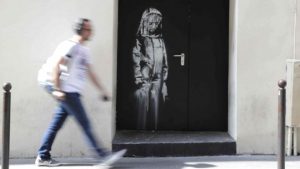