Writhing, smiling, touching her teeth and her chest: those are the first images that greet you in the video for Bjork’s Big Time Sensuality (1993), the fourth single from her fittingly titled debut, Debut. She blinks and grins down the lens – spinning back and forth on the back of a moving truck as it trundles through the traffic and towers of Manhattan. Shot on grainy black and white, it’s simple and fun.

Midday, Saturday in Cowley, and things feel less simple and fun. I’m painstakingly clearing my bedroom floor: my bed frame, mattress and bookcases lie against the back wall. Both mine and Claudia’s wardrobes (and those items stolen from my housemates) lie out on the floor in types – trousers, dresses, scarves. Film is rolled into my camera and a dust sheet nailed across where the sunlight hits the walls. When Eddie and Rudi come over, I give them coffee and tea with hot water that’s been waiting ten minutes for their arrival. Then, once their drinks have cooled, we play some music and begin shooting. 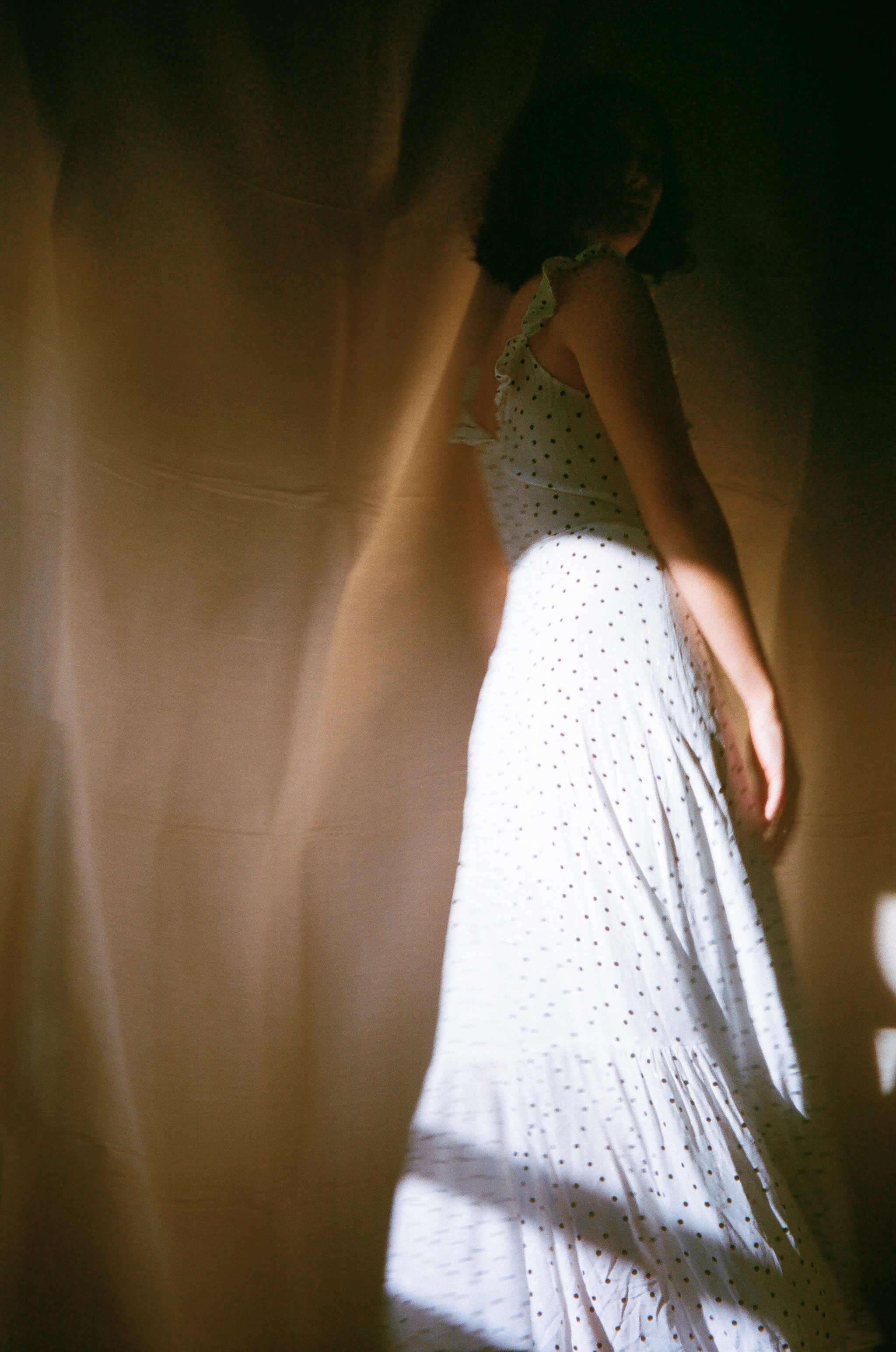 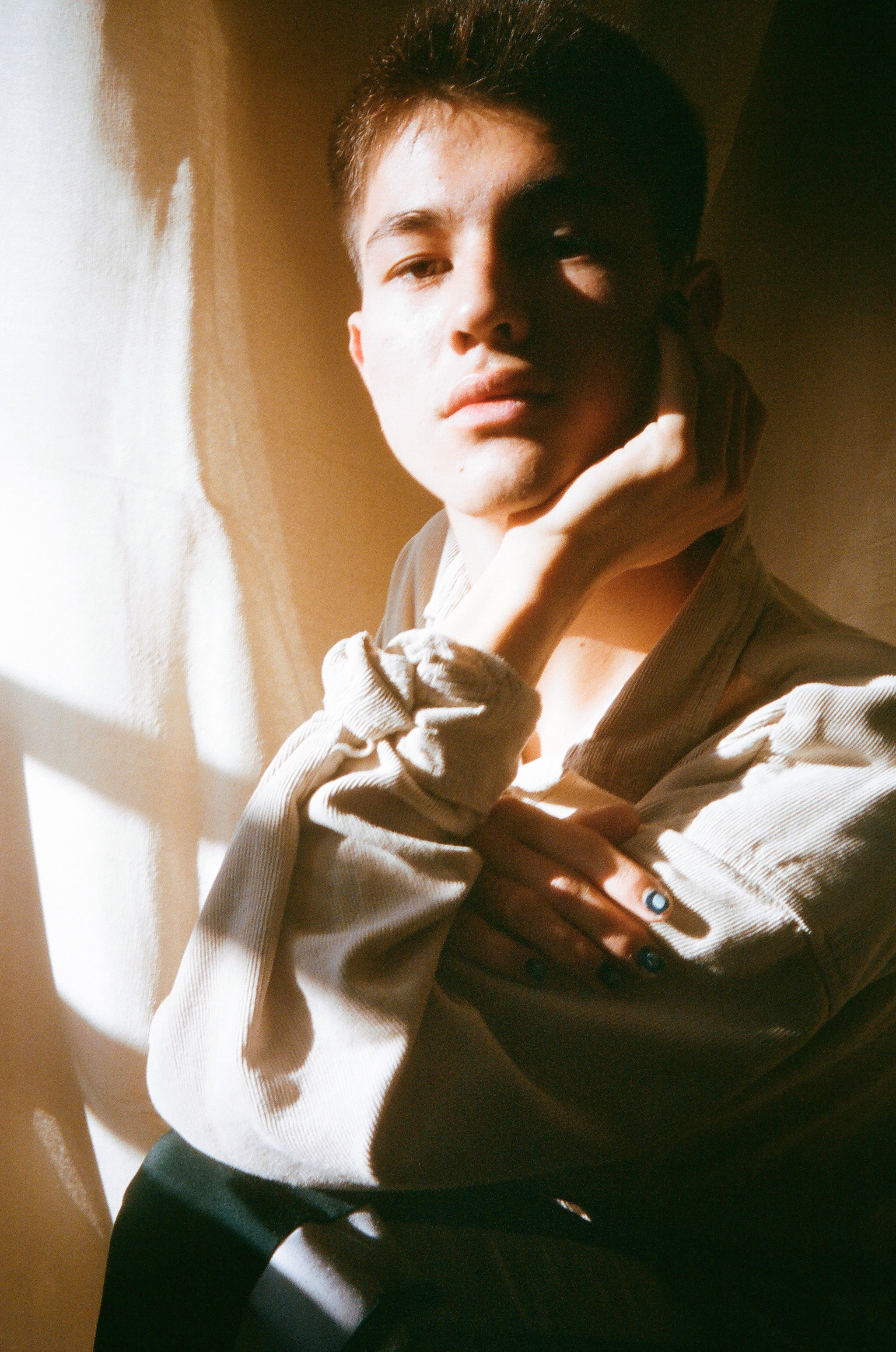 “We just met / And I know I’m a bit too intimate”. These words from Bjork’s Big Time Sensuality were my starting point. I’d been listening to the track in the run up to the shoot. The words tell of someone oversharing, of an intrusive intimacy that the speaker can’t help but indulge in. To me, the relationship between photographer and subject doesn’t seem dissimilar: I’m always acutely aware of how awkward it must be on the other side of the camera, staring into the lens. Yet Eddie and Rudi seem natural. Unflinching and comfortable in themselves, funny and self-effacing, they both make the shoot a joy. 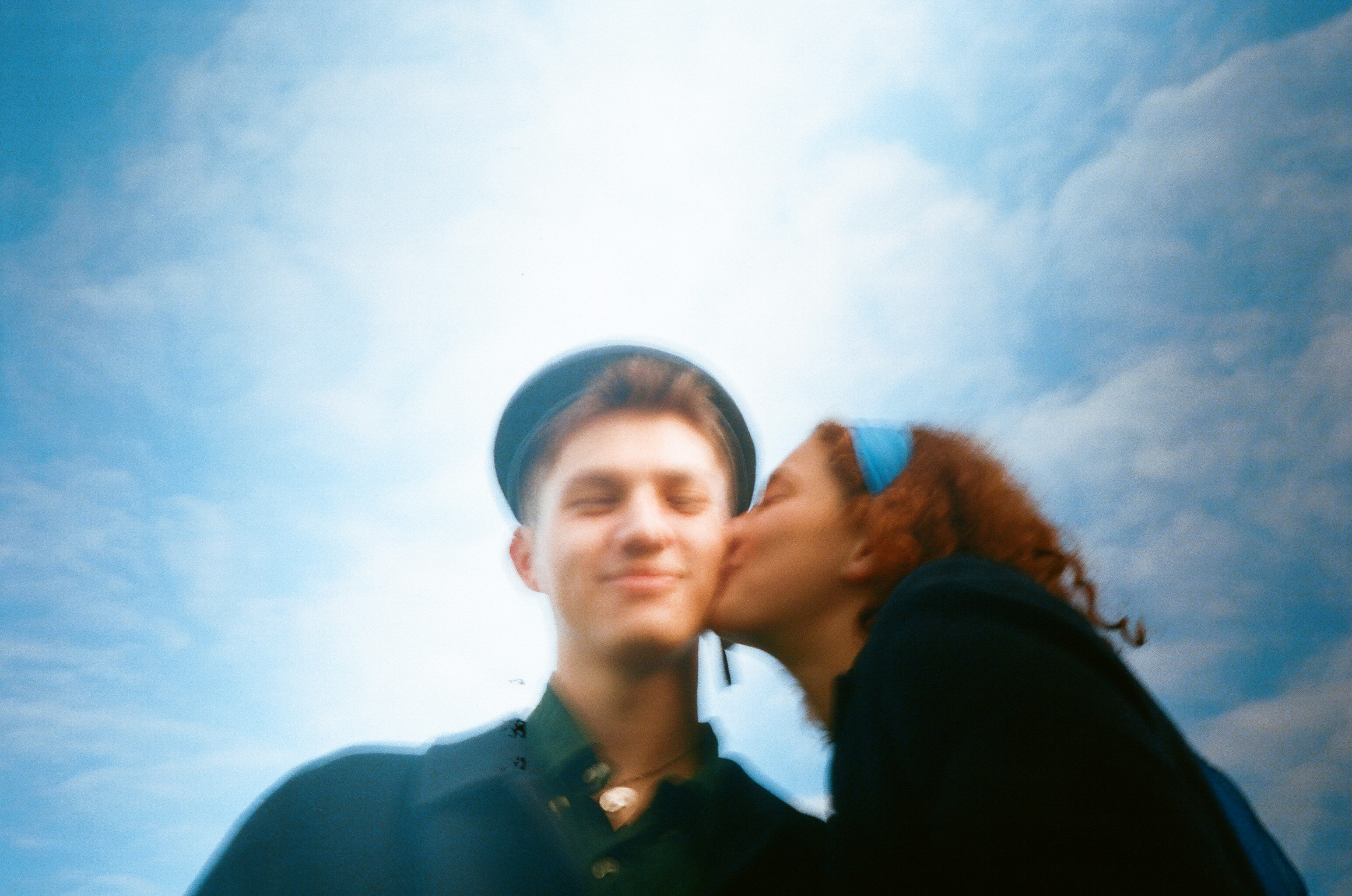 Various neckties and my tracksuit, Claudia’s white linen suit, a head scarf turned into a bandeau, sleepers swapped for pearls; there aren’t any particular rules. A rotation of Lauryn Hill and Drake provides ample rhythm for us to move about; they both dance on camera while I move as far back as possible to fit them in the frame. 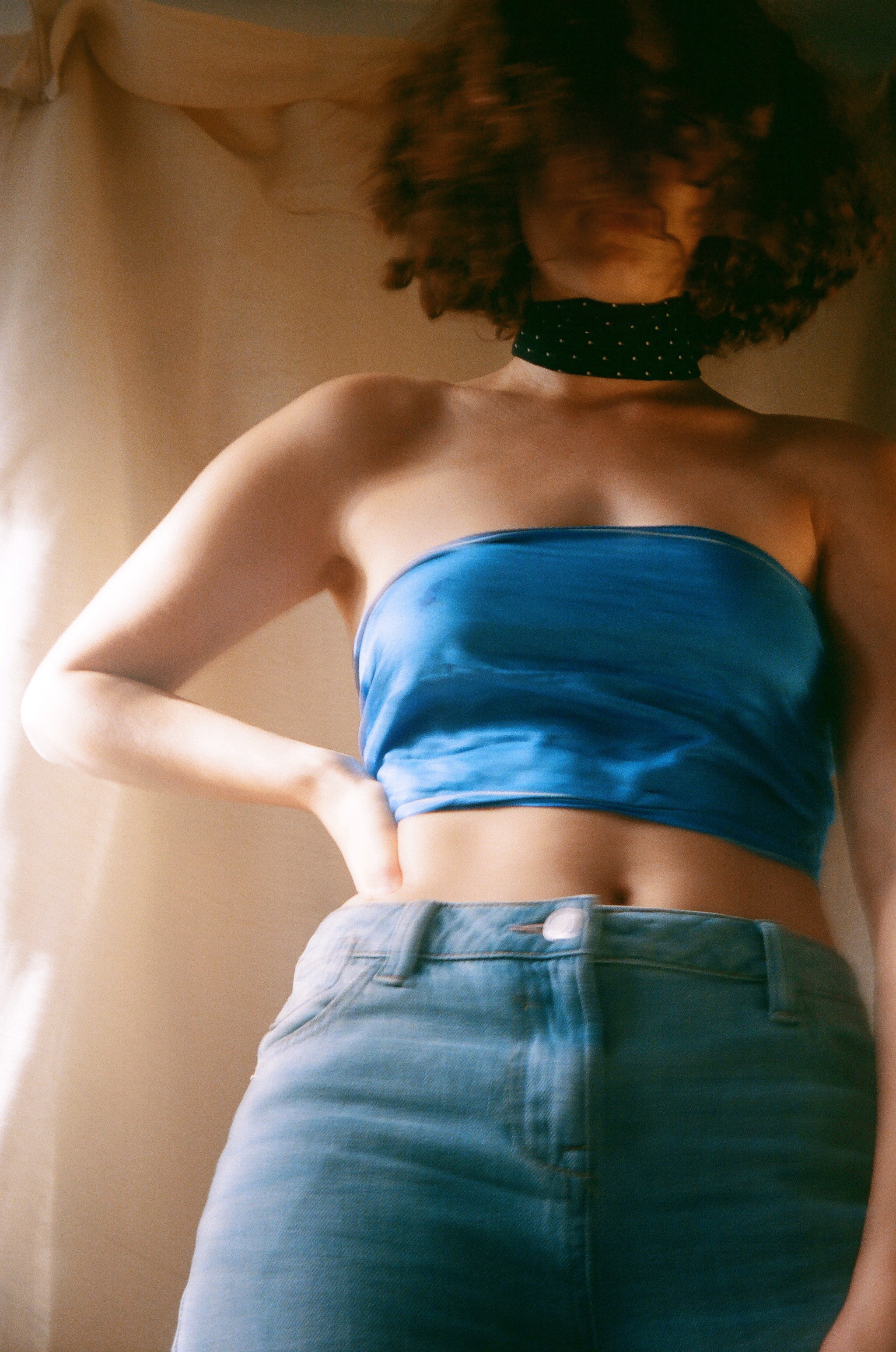 Whenever I shoot fashion imagery, I can’t help wondering what the point is. We’re not necessarily selling clothes, nor advertising anything – essentially, we’re making something artificial. While they might be contrived and planned, I feel the photos are authentic in their intimacy. I wanted the pictures to tell of both an insouciant youthfulness, and the latent self-consciousness that comes with it. 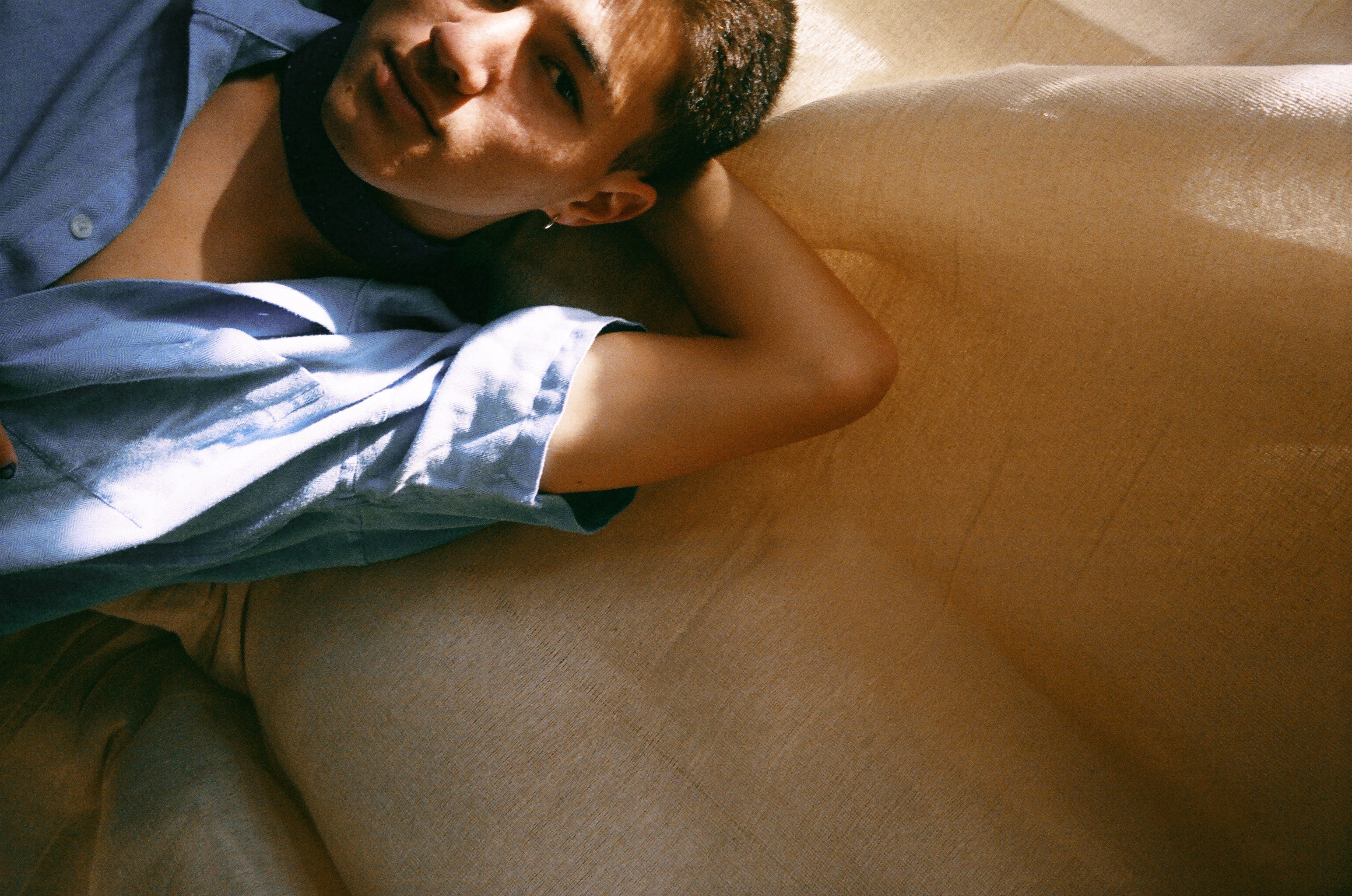 Like Bjork, the subjects are both yielding and unsure. The confrontation between that uncertainty and my gaze is caught in each frame. In Camera Lucida (1980), Roland Barthes describes the act of photography, well-taken and well-received, as a kind of ecstacy. The erotic photograph, Barthes argues, disturbs the pornographic. This is exemplified best by none other than Robert Mapplethorpe. Rather than photograph the genitals directly (which of course he does also), Mapplethorpe photographs the texture of a pair of underwear too, so scrupulously that the sexuality is shifted; dislocated somewhat. In this shoot, I intended a similar dislocation. Underwear is hinted at by the skin of a waistline cut up by jackets and waist bands; the curve of breasts suggested through the translucent tulle of a dress; the eye contact of the subject interrupted by the blur of a long exposure. Central to Barthes’ notion of ecstacy, in portraiture at least, is the tacit erotic transaction between subject and photographer. In creating a purposefully intimate image, the subject makes themselves vulnerable to the person taking the photos. In many of these photos, the subjects stare out at the photographer, our shared gaze becoming that of the viewer’s. The intensity of transaction and vulnerability is thus transferred to the yet unknown party. There’s a powerplay here, which is both necessary – and arguably democratising dependent on those involved. I’d hope the process is not one which revolves around object and objectifier, but instead the more dialectical and interesting roles of subject and photographer. In itself, such a dialectic is undoubtedly a little sexy; fun and implicit. 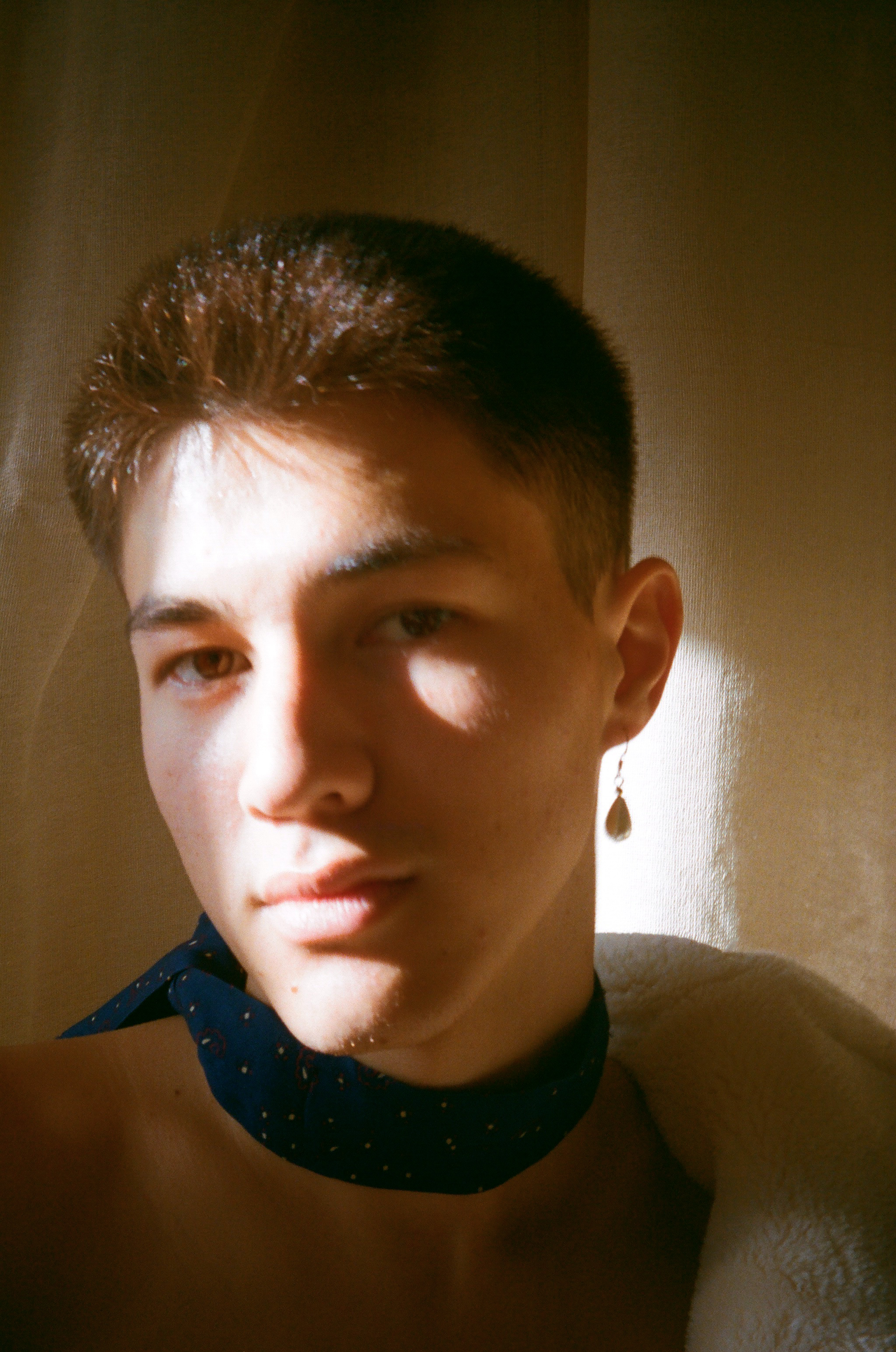 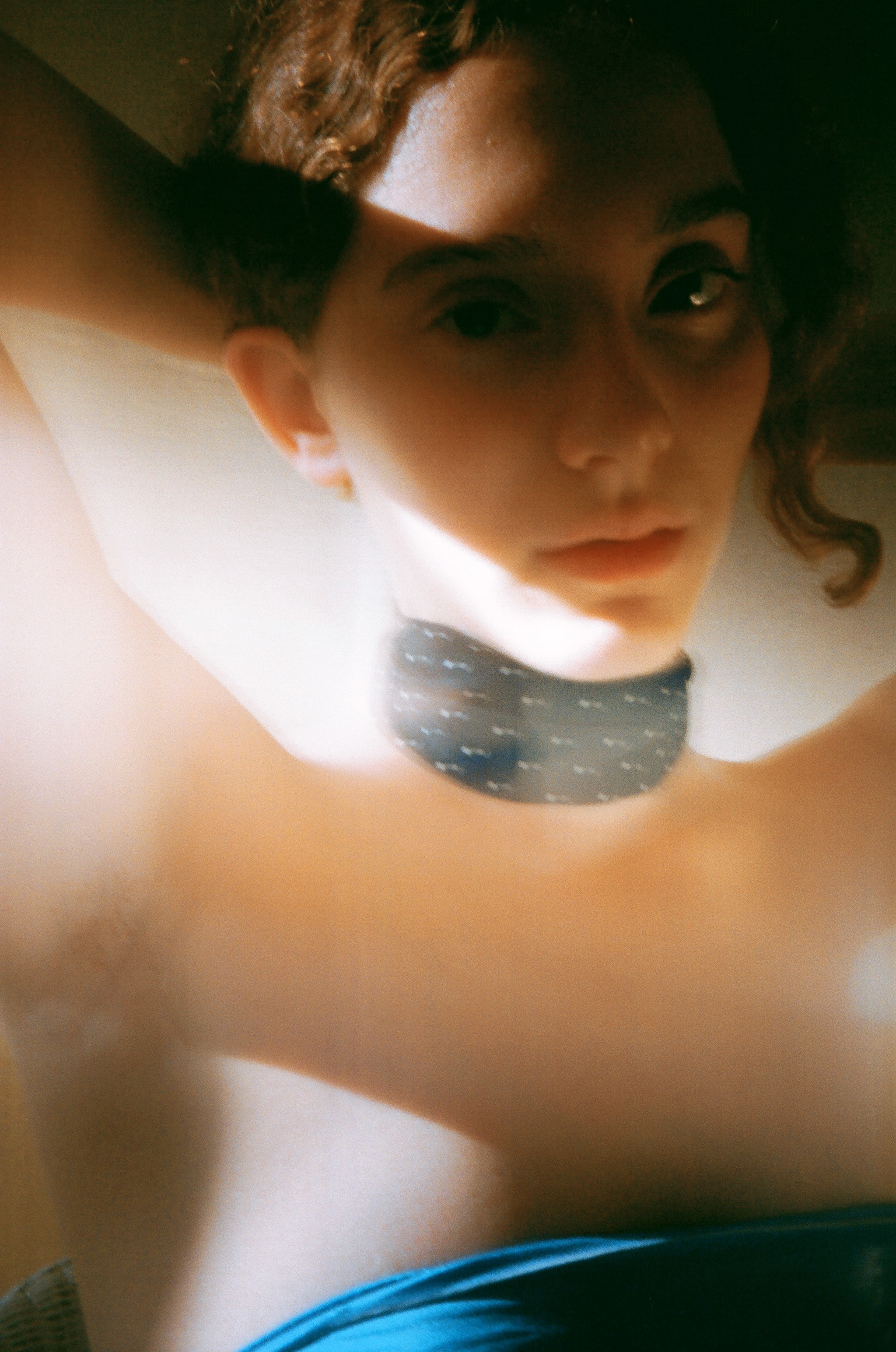 Aesthetically, I think the photos have a romance about them too. All high drama, bright lighting and long shadows, little Caravaggio’s perhaps? With just a glance, Eddie and Rudi flit between the coquettish front of Boy Bitten by a Lizard and the quiet openness of Boy with a Basket of Fruit. While we shot, a copy of Germaine Greer’s The Beautiful Boy (2003) sat on my bookshelf and at one point I noticed Eddie having a flick through. In it, Greer argues for the reclamation of male beauty as a redress of male-female power dynamics. Fifteen years later, I’d say our pursuit of beauty in these pictures is less gender discerning, indifferent even. It’s less battle of the sexes and more rejection of lazy norms: they’re both beautiful and they both have a certain authority. The beautiful boy isn’t so much a radical suggestion as just another role one might choose to play. While it might be a little overconfident and naïve to exempt ourselves from the power dynamics so entrenched in the artistic process, I hope we queer such paradigms a little. See for yourself. 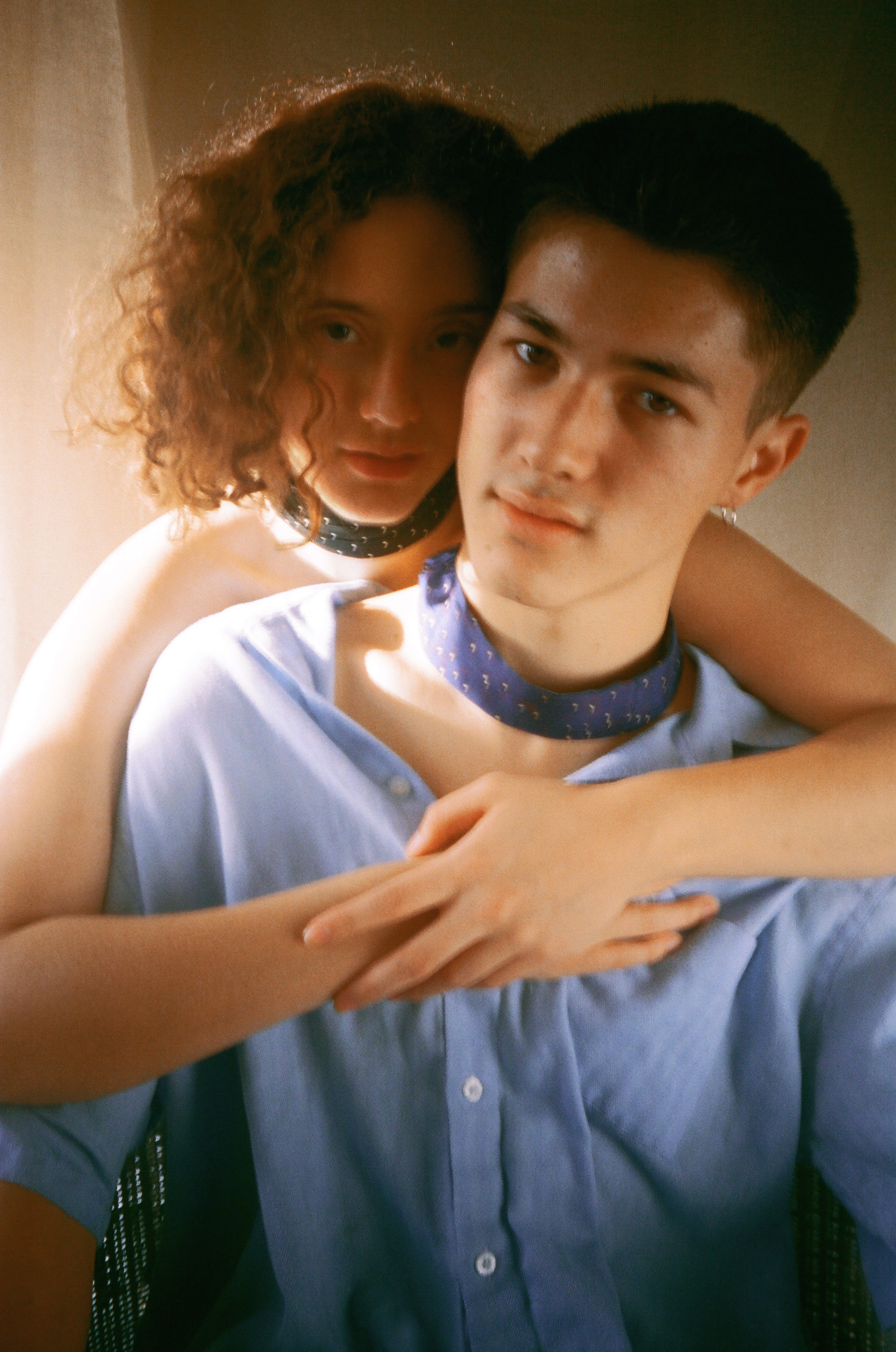 Of course there was going to be romance. You can’t escape it: Antonio’s bedroom drenched in sunlight catching the white and the chiffon of the two dresses we used; that soft whisper of nakedness oozing through; Rudi demurely eying the camera. But we wanted to avoid nostalgia – and I think there’s something paired back about this romance. We didn’t use much jewellery: I didn’t want to drown the models and weigh them down with it. The flash of white trainers and bare skin keeps everything playful, so that you’re seeing Eddie in a linen suit but he’s teasing your eye with his torso and the band of his boxers. That boundary between playfulness and sex is so blurred in youth, and it was fun to juxtapose the clichéd romance of a nonchalant shirt with the notoriety of Adidas’ three stripes. 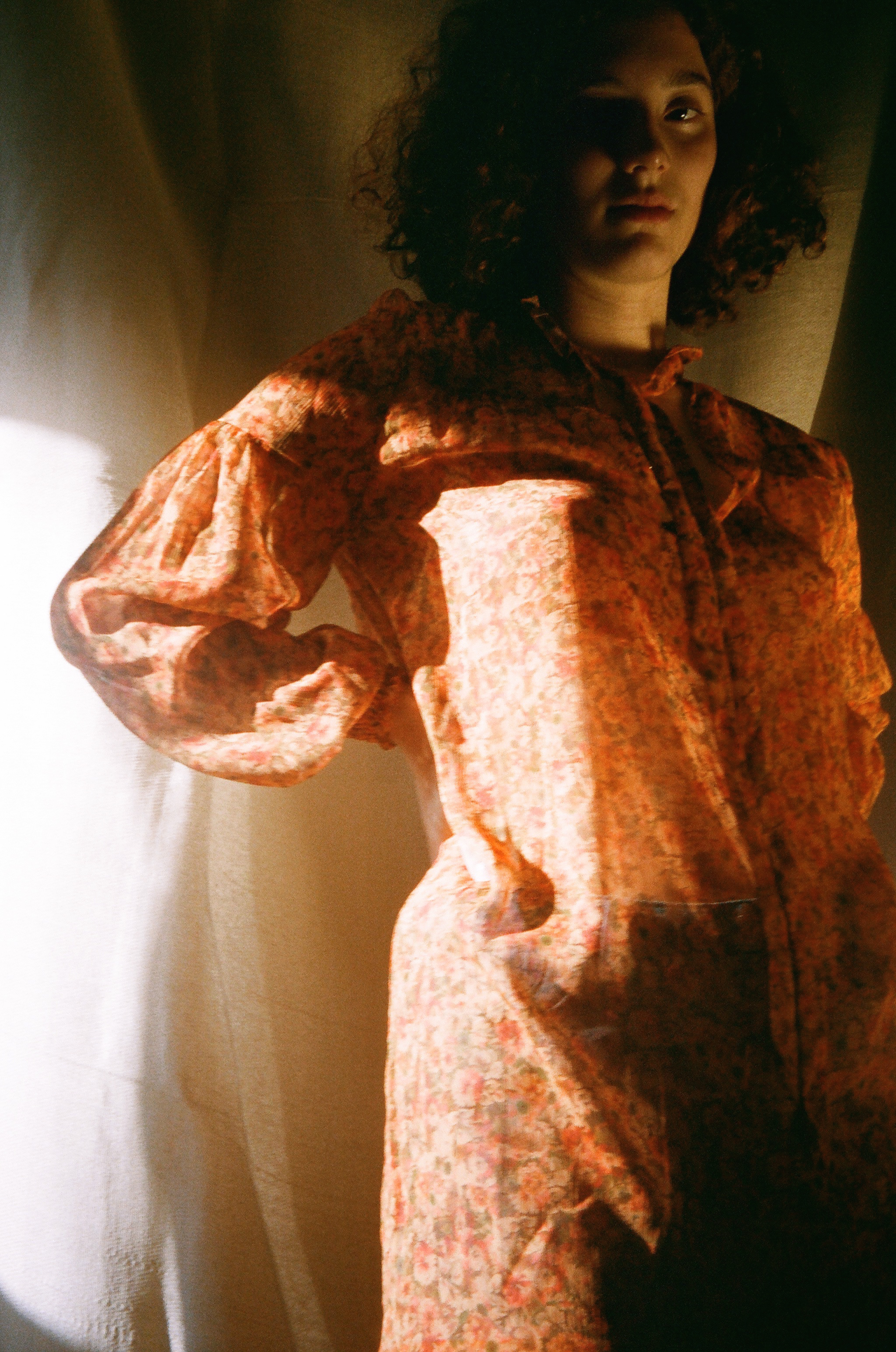 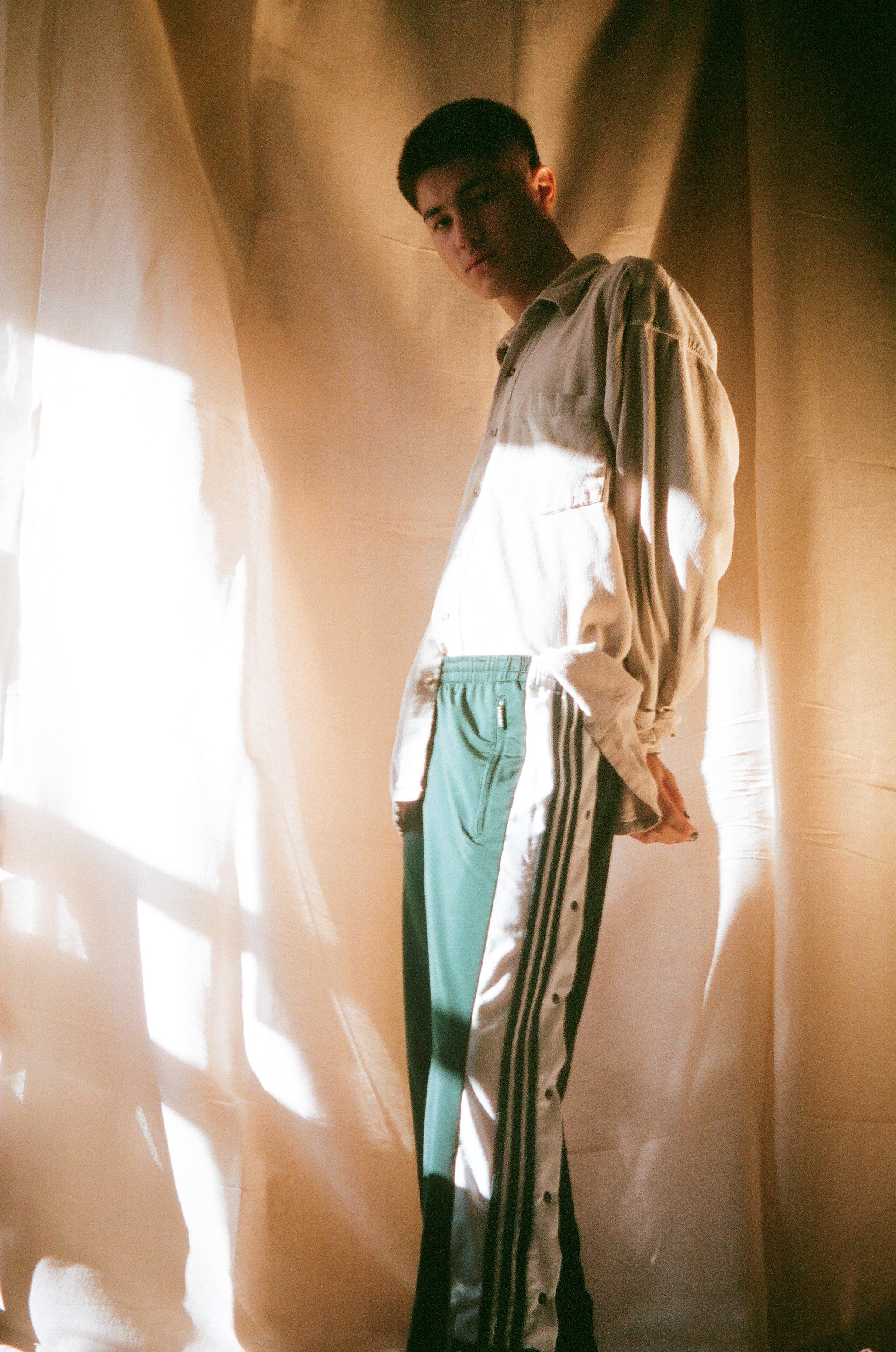 Rudi and Eddie share that chemistry which is a dream to recapture in styling. I wanted to pair them, but not to match them. At Uni Parks, for instance, they’re wandering together in the matching darkness of their jackets, but then you get a whip of electric blue colour from Rudi’s headscarf. I was trying to catch that essence of friendship whereby two people come together through similarity, and yet flourish together through their differences. I think my favourite of Antonio’s shots captures this: the pair lie on the ground in contrasting colours while their heads touch, looking up into the lens with that teasing spark in their eyes. And yet the cream of Rudi’s cable-knit jumper, melting into the navy of her friend’s, gives back a gentleness. You’re returned to the innocence of friendship, where sensuality is a whisper. 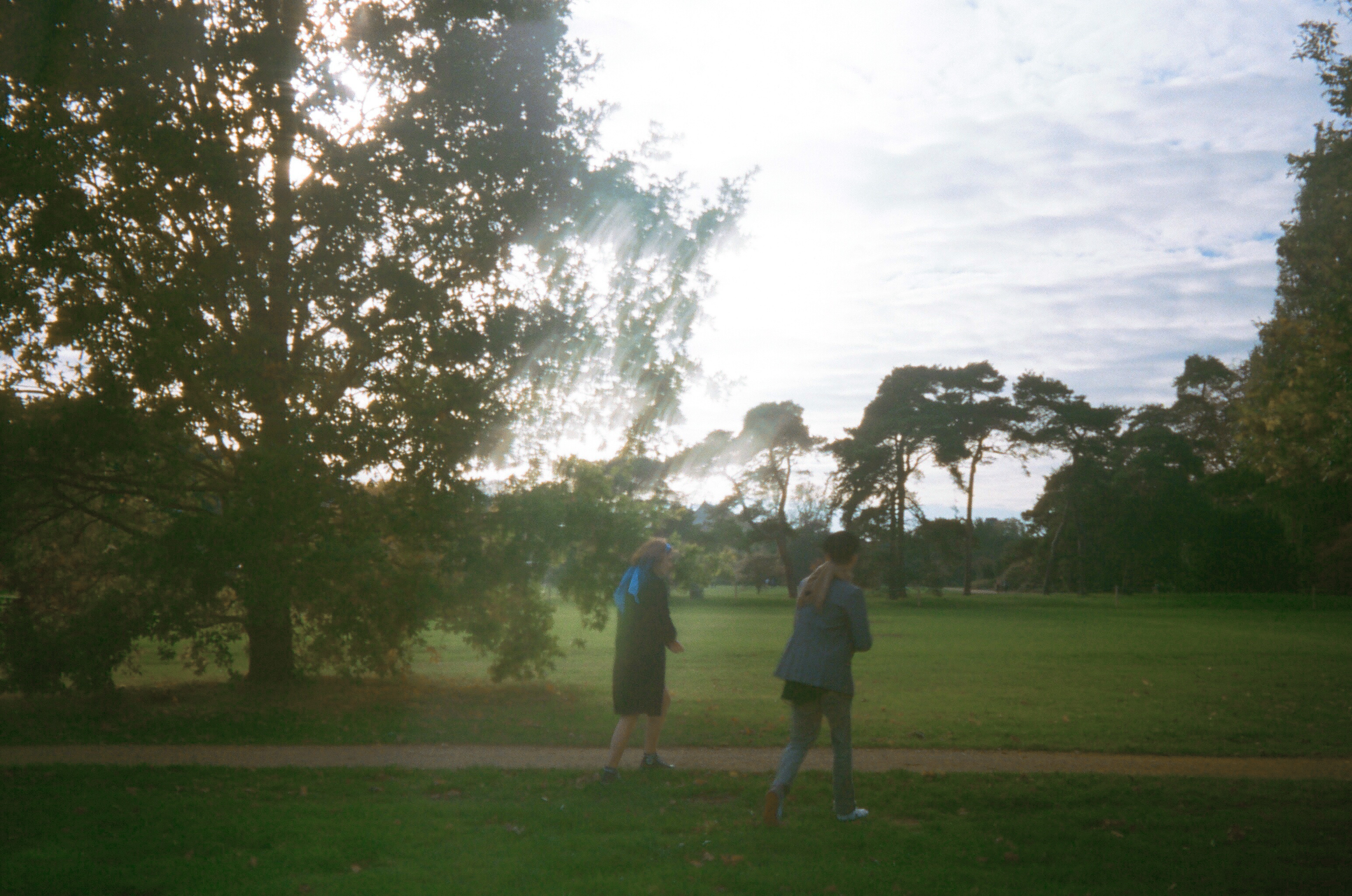 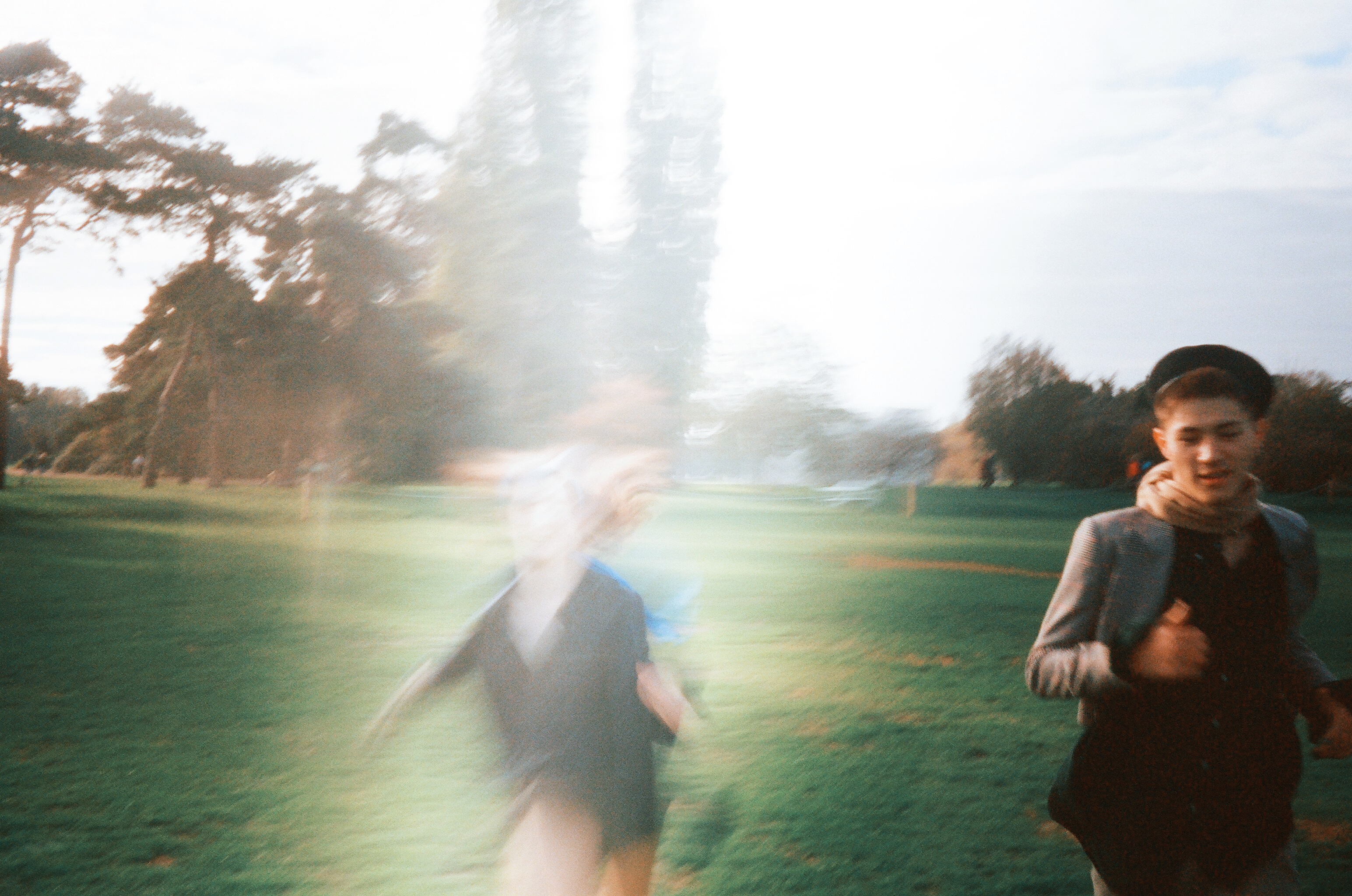 Watch the film below:

Modelling by Eddie Gao and Rudi Gray; Words and Styling by Claudia Green; Words, Photography and Direction by Antonio Perricone