Sally Rooney is the current darling of the literary world. Over the past 18 months, the 27-year-old novelist’s books have been at the centre of a seven-way bidding auction, won the Sunday Times Young Writer of the Year Award and a place on the Man Booker longlist, and adapted into an upcoming BBC Three series by Oscar-nominated director Lenny Abrahamson. Both her debut novel, Conversations with Friends, and her most recent work, Normal People (which the Guardian was quick to proclaim a “future classic”), are deliciously magnetic reads. The prose is taut and the interior landscapes of the characters are rich with emotional entanglement.

But perhaps one of the most striking – and often dismissed – elements of her work is its radical political current. In an RTE radio interview, she joked that her aim for Conversations with Friends was to start the revolution. When I interview Rooney via email to discuss the political mission of literature and its potential to effect radical social change, however, she insists that she is “just a novelist”.  Rooney says she spends a lot of her time thinking about what defines “good” art. I ask Rooney if she thinks good art should make a political statement.

“I think it’s more that it’s bound to,” Rooney says. “It would be naïve to think art can exist outside ideology. So having accepted that, maybe it’s better to think critically about how your work participates in ideology.”

In Normal People, social class shapes the experience of protagonists Conaill and Marianne (the son of a cleaner and daughter of a solicitor), who diagnose capitalism as the problem with “everything”. In Conversations with Friends, both central characters are of the far-left: Frances is a communist and Bobbi an anarchist. They discuss burning down liberal democratic government buildings; they refer to love, the most seemingly pure of reservoirs, with intellectualised dispassion, even contempt: a “discursive construct” based on “unpaid labor”.

Many critics reject Frances and Bobbi’s radical political allegiances as “gestural” (Vault), “toothless and theoretical” (Slate) or merely as a symptom of youthful naivety, “a way of deferring adulthood, with its unavoidable ideological compromises” (The New Yorker). Socialist critics would probably diagnose these remarks as symptoms of capitalism itself: its ideology having permeated all aspects of human social life so deeply that it’s assumed to be the only practical way of structuring society. In the age of “capitalist realism”,  any discussion of an alternative is either a product of bourgeois intellectual posturing or an outright fairytale.

So how do Rooney’s novels participate in capitalist ideology? “I don’t really understand what the book’s relationship is to ideology,” Rooney admits. “It’s a novel, so I suppose it’s meant to do whatever art does, and I don’t know what that is. It’s something I’m still trying to work out.”

Most of her characters at Trinity College Dublin inhabit a world which is largely closed to all but Ireland’s highest socio-economic bracket. There, as at Oxford, teenagers swan around in black tie behind 400-year-old gates whilst a homelessness crisis festers just meters outside. Trinity Dublin does have a stellar access programme for lower socio-economic students (which Oxford introduced last year at LMH). But in Normal People, Conaill’s experience in this unfamiliar world, where privilege speaks by entitled default and yet has nothing to say, is understandably coloured by isolation and estrangement.

Rooney tells me that “a lot of people have said Conversations with Friends is bourgeois”  (presumably because the characters engage with an educational system that perpetuates inequality whilst frequenting various country houses during Summer terms).

“The word bourgeois doesn’t really mean anything more,” she continues. “I think the word ‘bourgeois’ properly refers to a class of people who make money from capital as opposed to labour. Outside that definition the word is rarely if ever useful. People who work for a living belong to a common class even if they don’t think they do.

“Calling things “bourgeois” all the time just helps to attenuate solidarity between working people and produce a notion of the working class so specific that almost nobody actually belongs to it.” 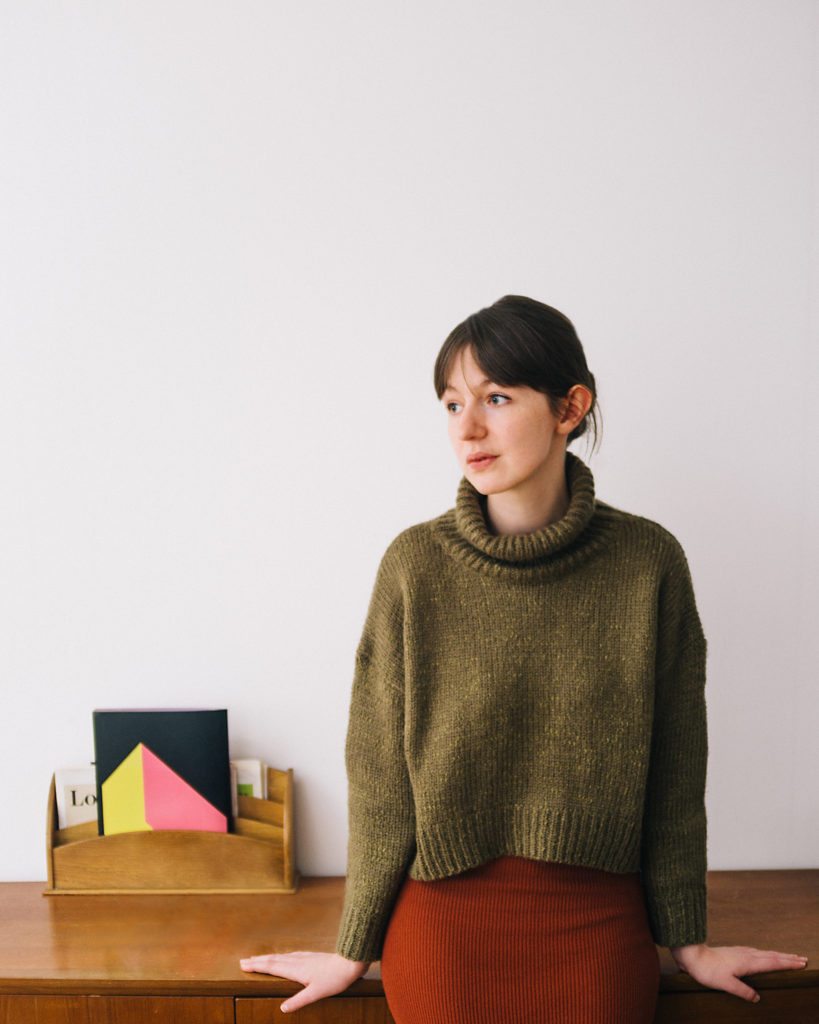 And yet the working experience of getting paid a six-figure sum to write a novel – the freedom to control and identify with one’s labour whilst receiving international admiration for it – is in stark contrast to the alienation of a worker who earns minimum wage stacking shelves in Tesco. In fact, it’s difficult to envision the “common class” to which Rooney alludes. For the average UK worker, on a salary of around £27k, working life is not lived on one’s own terms as it is for the elite artist. In his cult manifesto on inequality and creative labor, 9.5 Thesis On Art & Class, Ben Davis claims that “understanding art means understanding class relations outside the sphere of the arts and how they affect that sphere as well as understanding class relations within the sphere of the arts itself.”

To call a book bourgeois, therefore, is not simply to asses the worlds between the covers its characters inhabit, but to consider how books circulate in the world itself. Rooney has written about how the novel is “structurally and historically a bourgeois genre”: usually written by, about, and for the middle classes. The publishing houses that produce them often depend on the unpaid labour of interns, and Rooney adds that “people who can’t afford to work for free are shut out of the industry in predictable ways.” I’m reminded of the time I came across a publisher who claimed to confront “gentrification” of the literary world, but whose primary output was novels by “diverse” authors on “urban” issues, and whose only employee of colour was an unpaid intern for a full year.

According to Davis’ manifesto, when “revolutionary” art is born, it is created by the labour of individuals whose radical impulses are by definition isolated from activist projects of solidarity. Is politically infused literature, then, simply assuming a threatening posture, and not posing any significant emancipatory revolutionary potential? I ask Rooney if she thinks literature can to provoke social change.

“Maybe literature can be part of social change,” she says, “but that’s not to say literature can intervene during a period of stasis and incite change all by itself. Where would the writer come from if that were the case? I tend to think writers are just normal people who inhabit society, and so literature arises from ordinary social conditions. Maybe it can articulate and reveal certain criticisms of those conditions, but only as part of something broader.”

Perhaps this is precisely where the literary (and political) value of Rooney’s work lies: as a tool to criticise dominant ideologies whilst immersing us in the lives of others; lives which are contrasted by social inequality. Perhaps it presents a kind of tethered literary solidarity. In which case the point is not to dismiss radical tendencies in art as “bourgeois” or “intellectual posturing”, but to inhabit dominant structures only to reject them.

Still, there are a thriving community of self-proclaimed “working-class” Irish writers who have either chosen not to appeal to the wine-swirling sentiments of middle-class taste-makers, or who have been shut out from the world of prestigious prizes and all their material gain. Should resistance or rejection of inequality, then, depart from the world of elite universities entirely, where writers gain much of their prize-winning capital, and instead write about the lives and concerns of “normal people”, as defined by working salary and opportunities in life?

Various writers and artists have experimented with form in a bid to reject dominant capitalist social ideals. Playwright Bertolt Brecht dismantled traditional narrative form to show audiences that all narrative, indeed all reality, is constructed. His mission was a social one insofar as he sought to use drama to remind people that if reality is manufactured, it is malleable and therefore subject to potential for social change. One of his critics, György Lukács, a fellow communist, posed that the social mission of literature is to show how the experiences of “the masses” (or the “working class”, whoever they may be) are influenced by the objective totality of capitalism.

Rooney thinks Lukács’s views could be conceived of as essentialist. “Brecht was responding to Lukács’s theories about socialist realism when he wrote: ‘Reality changes; in order to represent it, modes of representation must also change.’ That’s a quote I think about often. Instinctively I feel I agree with Brecht, modes of representation have to change, but then I’m such a conventional novelist, and I don’t know what to change or how.”

Despite her sentiments of conventionality, the fluid and open relationship structures Rooney’s characters inhabit are consciously atypical. While writing Conversations with Friends, she was very interested in the idea of radical relationship politics, having not previously considered how our intimate lives replicate certain types of political power. “Or if I had thought about it, no alternatives seemed possible, so I was interested in dramatising alternative possibilities in the book.”

Frances and Bobbi resist monogamy, with Bobbi claiming that marriage is a sinister management of relationships by the state. “Monogamy was based on a commitment model which served the needs of men in patrilineal societies by allowing them to pass property to their genetic offspring, traditionally facilitated by sexual entitlement to a wife.”

And yet both her novels explore the emotional turmoil produced by these fluid relationships. Bobbi offers that non-monogamy could be based on “something like spontaneous consent”.

I wonder if this is a good blueprint for liberatory relationship structures, or if the despair her characters experience suggests that experimenting with love should be avoided? “It’s a good question you raise about Frances’s emotional turmoil, and what that implies about non-monogamy… I didn’t mean to depict non-monogamy as uniquely painful, only ordinarily painful. A little bit of emotional upheaval strikes me as healthy but I know others disagree.”

Again, Rooney resists jumping to simple conclusions about her work. “I’ve seen psychologists diagnose Frances with all kinds of pathologies and personality disorders, which troubles me, though I don’t know if my issue with it is personal or political.”

Sign up to The ISIS’s weekly newsletter, The Weekly Window.