Paris in the 1920s: bohemian, artistic and sexually liberated. This impression of the ‘les années folles’, as the French call it, is a well-established one and ingrained in our conception of Modernism. Even today, the idealised myth continues in popular culture. The success of Woody Allen’s film Midnight in Paris is testament to our continued interest in the period. But what names spring to mind from that era? Most people might immediately think of Hemingway or Joyce. That is the common, narrow and androcentric image of period.

The ‘Women of the Left Bank’ have been paid far less attention. A large community of female writers, critics and artists at the time remain marginal figures compared to their male counterparts. Although history has, for the most part, passed these women’s writings and lives by, they were vitally important to the development of Modernism, and the women themselves lead impressive and inspiring lives.

Two of the most important figures at the time were Adrienne Monnier who was in charge the French bookshop “La Maison Des Amis des Livres”, and Sylvia Beach who ran the English bookshop “Shakespeare and Company”. The two sister businesses on the Rue de l’Odéon provided a vital arena for the mélange of languages and literature. Beach and Monnier were cultural diplomats, facilitating the meeting of artists from around Europe:

“The immediate compatibility of these two extraordinary women shopkeepers, opposite numbers in what became a cultural Franco-English language stream flowing down their street, visibly added to its picturesque quality” – Janet Flanner

Their ‘literary midwifery’ of Modernism monopolised their time: editing, selling, advertising and promoting certain writers. Beach funded and enabled the publication of Ulysses while Monnier, through her magazines Le Navire d’Argent and Mesures, helped many writers reach a wider and more diverse audience:

“To Adrienne Monnier with Le Navire d’Argent, I owe the introduction of my verse to French readers” – T.S. Eliot

From devoting their time and money to others, the two women sacrificed the pursuit their own artistic talents, and what they wrote themselves remains largely unknown. Monnier coined short pieces under the pseudonym J.M. Sollier in her own literary magazine, and also published a poetry collection La Figure. Her poem dedicated to Sylvia Beach encapsulates the sense of solidarity and camaraderie at the time: 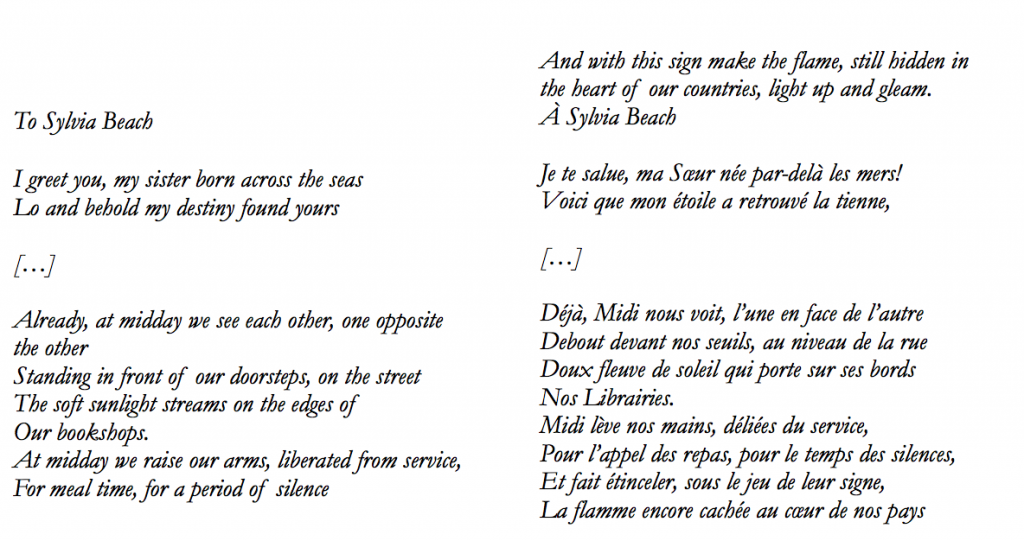 Just from this moving poem it is clear how much the Beach and Monnier supported each other.

Sylvia Beach in her bookshop

“There is not a person in the literary world who has not heard of, read and some stolen from Nightwood. The paradox … is … I am the ‘most famous unknown of the century!” Djuna Barnes

Her novel Nightwood is a powerful work, subverting cultural and aesthetic premises and challenging traditional notions of gender and femininity. Throughout the text, she critiques an increasingly fascist social order by focusing on outcasts and marginalised figures. The character of the Doctor O’Connor is particularly arresting and his cross-dressing exposes the artificiality of gender codes:

“I am to blame if I’ve turned up this time as I shouldn’t have been, when it was a high soprano I wanted, and deep corn curls to my bum, with a womb as big as the king’s kettle, and a bosom as high as the bowspirit of a fishing schooner?”

As well as exploring identity, Nightwood provides a depiction of the fragmentation and malaise in Europe at the time, but it is far less known than The Waste Land.

It is clear, then, that these women had unrecognised literary talent which is worth further research. But, it is not just their works that are of interest. Just as their experimental writing challenged orthodox literary values, so many of their lives challenged traditional notions of femininity. Natalie Barney is one figure whose unconventional lifestyle pushed all boundaries. She enjoyed the sexual freedom that Paris afforded her compared to America or England.

She was an experienced and promiscuous seductress of women with many famous relationships: Renée Vivien, Romain Brookes and Dolly Wilde. Barney also wrote poetry and a book entitled Pensées d’une Amazone in which she enumerates her ideas on life in a series of witty epigrams. Through these capsules of feminist logic one can observe what a strong and independent a spirit she was:

Barney also supported female writers and artists through her “Academy of Women”, a group who met in her salon regularly to discuss and share their work. The society was a reproach to the venerable “Académie Française”, from which women were excluded. Fully bilingual herself, she provided a key intersection between the Anglophone expatriate community and French literary networks.

The conditions of expatriatism gave many of the women at the time unprecedented levels of freedom. They could live as they pleased, like Natalie Barney; write as they wanted, like Djuna Barnes; or enjoy the independence of publishing literary magazines as Adrienne Monnier did. Today, the growing interest in their works and lives is promising. Instead of linking the traditional image of Parisian ‘expat’ life back to American fantasies of Hemingway, we should look at the period as a time of blossoming female creativity and feminist thought. The ‘Women of the Left Bank’ were pushing boundaries in their ways of living, and the ideas they were espousing. They supported female work through literary magazines, intimate meetings and independent self-publishing. This has clear echoes with the revival of female zines and feminist magazines today. We could learn a lot from the ethics of female solidarity and creativity that the women of the left bank demonstrated nearly a century ago.