My mum fills our house with music. My earliest memories were singing along to Boney M and Ladysmith Black Mambazo. Grace Jones’ A One-Man Show poster stands tall and proud at the top of the landing, her distinctive cheekbones and broad shoulders protruding out of the frame. My mother’s mother filled her house with the sound of her mother tongue: Nigerian Jùjú such as Sunny Ade and The African Beats, and Ebenezer Obey, entangled with my grandfather’s love for jazz, blues, and ragtime. But it wasn’t from my Nigerian family that I first learnt of Nigerian rock music as a distinctive musical tradition. It was only last summer, from a CD found in my local Oxfam entitled ‘The World Ends: Afro-Rock and Psychedelia in 1970s Nigeria’. When presenting it to my British-Nigerian mother and Nigerian grandmother, they had absolutely no idea what I was talking about.

2017 marks fifty years since the outbreak of the Biafran War. In 1967, the persecuted Igbo people, mainly settled in the South-East of the country, established the Republic of Biafra and declared independence from Nigeria. One million Biafran civilians starved due to a naval blockade on the Republic. By 1970, Biafra surrendered and the war ended. But the scars of the war were still visible, and made their way into Nigeria’s own legacy of rock. Nigeria’s cultural influence across the globe is vast: Peckham in South London is referred to as ‘Little Lagos’; Yoruba, an official Nigerian language, has vast influence on Cuban Spanish and Brazilian Portuguese. Considering this, it seems strange for Nigerian rock to be half in shadow; for a very long time, relatively little has been known about its legacy, or its artists.

The residue of Nigerian rock had been reduced to a collection of compilation CDs, like the one I first found. They act as a collective diary, snapshotting the post-civil war trauma felt by the musicians during this period: the rock artists who transitioned from surviving the civil war, to spearheading the ’70s rock movement amidst the backdrop of a military government. Often when we think back to ‘the ’60s’, our view is reduced to a monolith of peace symbols and flower crowns. But in 1960s Nigeria, Woodstock and psychedelic mushrooms were substituted for three years of conflict.

At a panel on the ‘Politics of Sound Systems’, the founding member of Soul II Soul, Jazzie B, spoke about how their aim was to create a sound which paid homage to their Caribbean heritage but was also distinctly British. In the same way, Nigerian rock took and altered African-American influences of jazz funk and Motown, constructing a distinct Nigerian sound which wasn’t devoid of indigenous influence. These artists were storytellers, whose experience of wartime was expressed in the form of this counter-cultural movement. Unlike the West, where the use of psychedelic drugs in the ’70s corresponded with psychedelic music, Nigeria’s post-war dissociative trauma became the fuel with which the rock movement tore through the landscape. 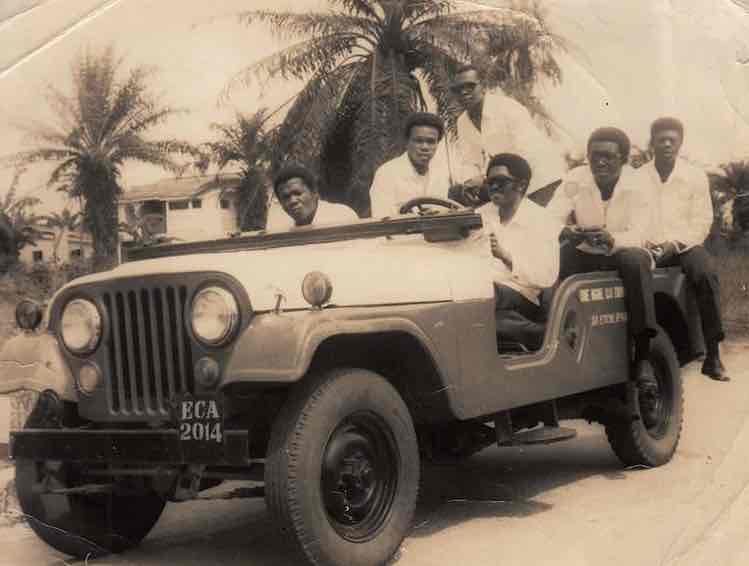 Wrinkar Experience became one of the first Nigerian rock groups to have a major record hit with ‘Ballad of a Sad Young Woman’ in 1973. The single’s slightly wailing, dark and mysterious sound represented the turmoil of the war. The outpouring of the bands from Eastern Nigeria is not by coincidence, as the conflict was intentionally situated in the east by the Nigerian government. Amidst the gunfire, a network of rock bands appeared. The Hygrades demonstrated the best of underground sound systems and DIY culture. Their lead guitarist, Goddy Oki, not only built his own studio, but also the amplifiers and instruments. Question Mark’s single ‘Scram Out’, with lyrics such as “people tell me don’t do that / But I’m gonna do what I’m gonna do”, threw down the gauntlet in the face of traditional values of obedience and conformity perpetuated by the older generation. The Funkees, a national treasure of the former Republic of Biafra, played their first show the night the war ended. The religious tensions between the Muslim north and Christian south translated through the actions of the young adults creating music. Ofo The Black Company’s lead singer, hailing from the south, was the son of a Christian pastor. Their successful single ‘Allah Wakbarr’ did not stem from a genuine interest in Islam, but was rather an act of rebellion.

But it wasn’t until speaking to Uchenna Ikonne—music historian, author, and producer—that the picture came into clear view. His research uncovered this genre when no one was looking; it helped to bring the forgotten tale into sunlight. “I suppose I was always aware of it when I was a child. I really came of age in the 1980s, by which [time] the rock scene was about a decade in the past. But echoes of it were still hanging around,” he tells me. Ikonne’s experience with this music shows its nuances across the Nigerian diaspora. By contrast, my mother—the same age as him but born and brought up in London—had no awareness of the genre. The songs of my grandparents, from the highlife movement of the ’60s, mirror the dreamy, tender era of the wave of the ‘African renaissance’, with Nigeria having gained their independence as a British colony in 1960. But by the ’70s, this nebulous dream of unity collapsed; the tone became hazy, confused, piercing. The trajectory of The Waves was a replica for this: following the war, their tone became harsh and psychedelic, reflecting the distressful anguish of the conflict.

The combination of Aba, his hometown, and the heavy prominence of the rock scene in the area made East Nigeria a harbour for Ikonne’s research. Within the city, his work was coloured with the experiences of the many living old-timers of the period, as they had both vivid memories and photographic evidence. Although maintaining that the likes of the Beatles and James Brown were some of the most influential figures during the movement, Ikonne tells me about how the civil war had some influence too. The war, and the social disruption caused by it, brought an end to the older, traditional Highlife as the main musical idiom, and so opened up a space for rock to become mainstream. “Highlife had become driven by ethnic segregation, but rock was more democratic. It was for everybody”. 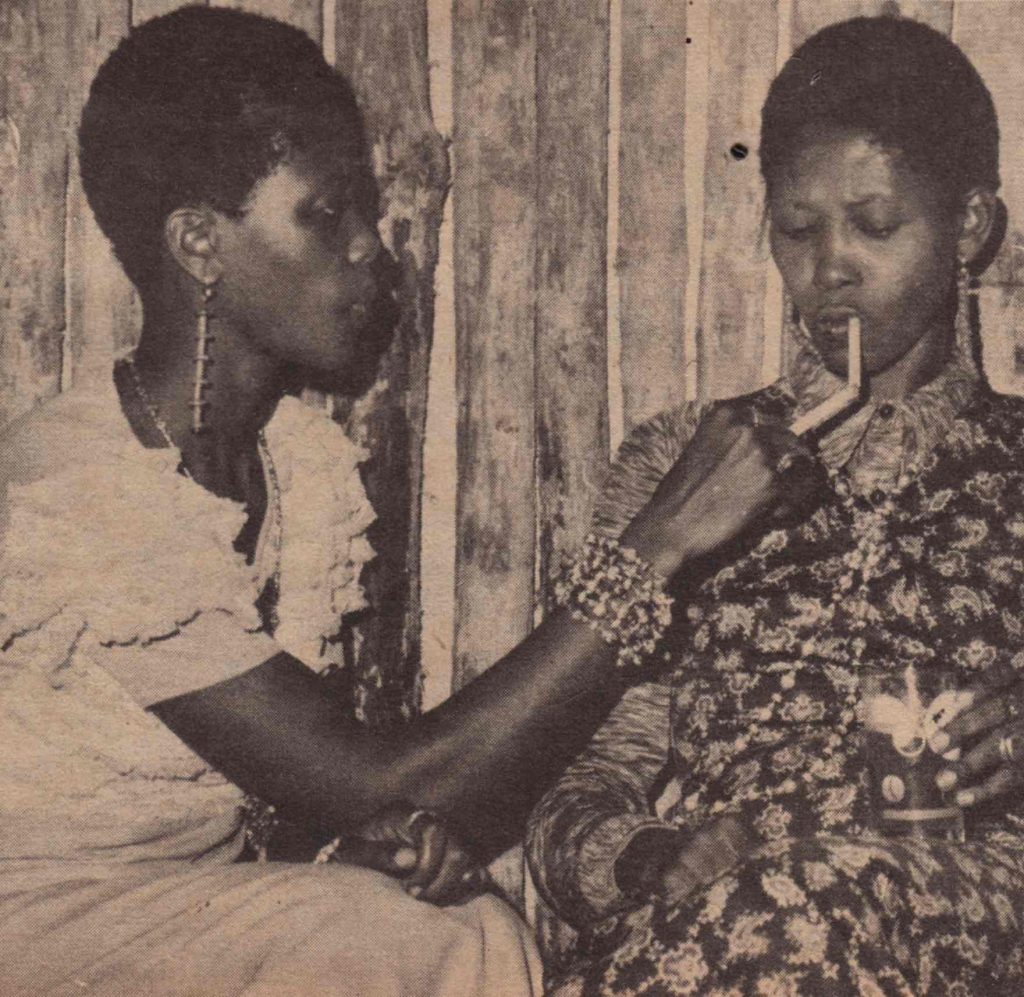 Ikonne confirms what my mother and grandmother’s lack of awareness of the genre indicates: the unremembered aftermath of the ’70s rock movement. “There is no rock legacy today. Most young Nigerians don’t know that Nigeria even had a booming rock scene to begin with.” In some ways, Fela Kuti’s popularity came about with rock’s demise. The pioneer of afrobeat, coupled with his avant-garde style and lyrics that unsilenced conversations of sexuality, sealed the fate of rock by the late 1970s—“His afrobeat overshadowed the rock revolution, starving it of exposure and attention”.

Although Nigerian rock of the ’70s is mainly a product of the past, some music acts are still performing. Twin sisters Taiwo and Kehinde, forming The Lijadu Sisters, are one of the only musical acts from the era still active today. When combined with the lack of women within the ’70s subculture, it’s even more significant, with Ikonne telling me that “it was generally considered to be an unseemly world for young girls to be in the midst of, so they were very few and far between.” At first listen to these artists, I had a thrilling sense of recognition. I can’t speak Yoruba—I’ve never even been to Nigeria—but a few tracks on an obscure CD can connect you to cultural ancestors you never knew existed. And when I played the CD to both my mother, and then my grandmother, they both agreed.