It is a quarter-past six on a muggy April morning in the already frenetic Chawri Bazaar of Old Delhi. The erstwhile centre of Mughal power in India, the fortified city remains home to a predominantly Muslim community to this day.

As day breaks, a young woman in a tiny room in an alley off the main market recites a verse from the Qur’an, as she does every morning following salat al-fajr, the first of her five daily prayers. Less than three hundred metres away, in the north-eastern corner of a building commissioned by the same Shah Jahan responsible for the Taj Mahal, the Shahi Imam Ahmed Bukhari puts the finishing touches to a fatwa, a document containing his legal opinion, decreeing his support for the ruling Congress Party. As the presiding cleric of the Jama Masjid, the largest mosque in India, he lives unlawfully on the site of this historic place of worship: it is not permissible, according to Islamic convention, for a person to live in a mosque. But no one can complain. Supposedly a direct descendant of the Prophet Muhammad, he is one of the most important and powerful religious leaders in a country that is home to the world’s third largest Muslim population. 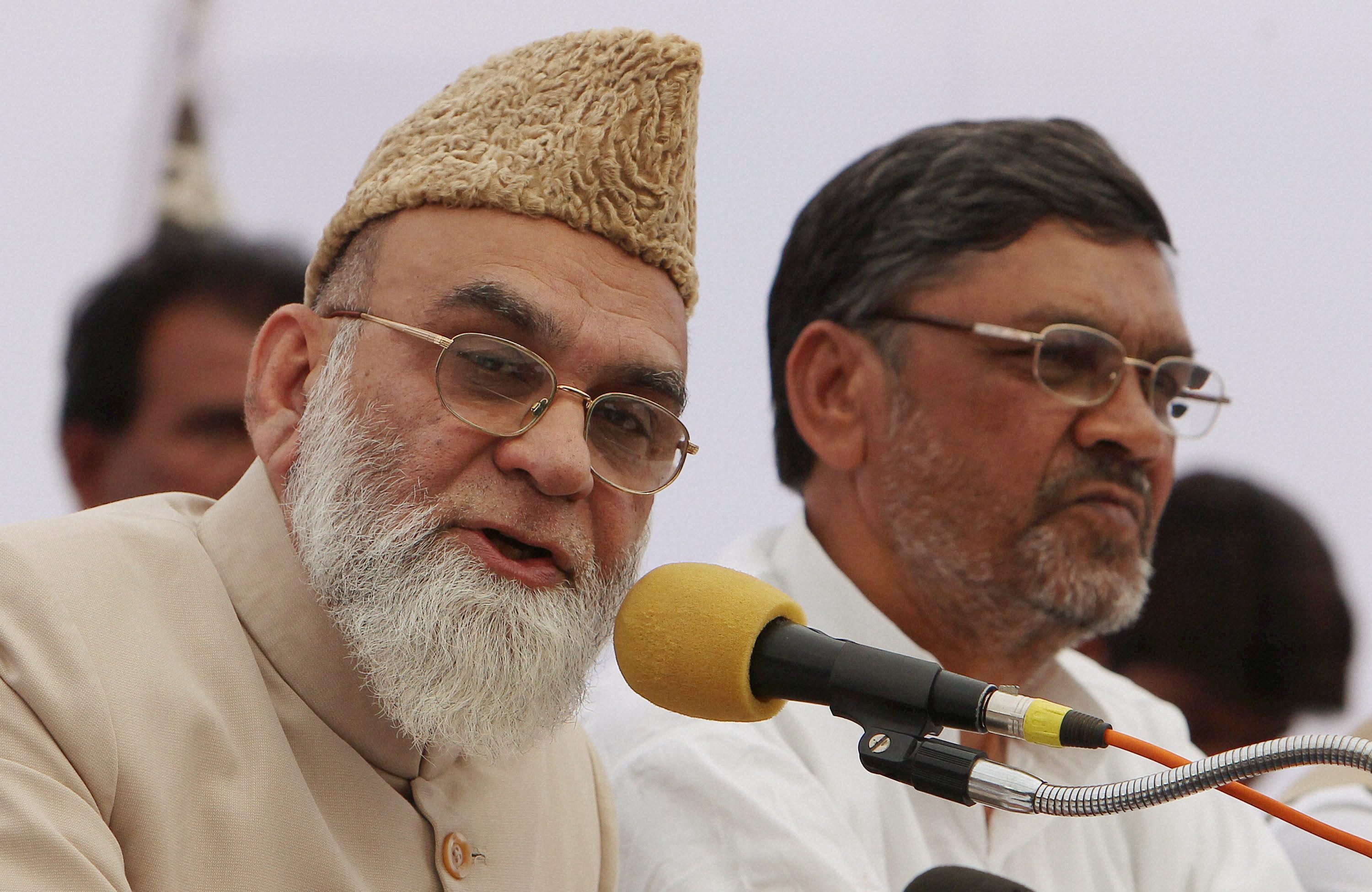 This abuse of power is in no way particular to Islam. The reality is that today’s India is an intensely varied religious landscape where more than a billion Hindus live alongside Muslims, Christians, Sikhs, Buddhists, Jains and various other esoteric religious sects. Religious leaders, often self-proclaimed, have capitalised on the fact that religion is such an integral part of the fabric of Indian society: there are now more spiritual leaders per capita than anywhere in the world. In a country ill-famed for its ‘culture of corruption’, it might be hoped that religious leaders could offer a source of ethical standards and upstanding moral guidance. Instead, however, it is within the sphere of organised religion that the abuse of public eminence for private gain is notably commonplace. A recent study from the University of Hyderabad found that “many consider religion to have been discredited, not because it is deficient in itself, but because of disillusionment with those who claim to be its caretakers, particularly on the part of young people, who consider that religion is in the wrong hands, is misused by ‘powerful’ people and stresses…fanaticism rather than its true spirit.”

The phenomenon of the ‘religious entrepreneur’ is most visible in Hinduism. A number of Hindu swamis – spiritual teachers – have garnered followings in the millions, under the pretext of offering inspiration, guidance, and medical care. Baba Ramdev, one such teacher, is famous for popularising yogic exercises intended to improve the health through exercise camps and television programmes. Described by New Delhi Television (NDTV) as ‘a wiry man with a full flowing black beard’, his corporation owns the country’s main Hindu television channel, Aastha, and he also has a sideline business producing various herbal homeopathic products. Thanks to these ventures, among others, Ramdev has created an empire worth in excess of $180 million. “These religious people claim to be saints, but how and why have they been able to create these empires? Is it possible to be a good person in religion and be making this much money?” asks Professor Pervaiz Alam, former BBC broadcaster and now Dean at the School of Journalism and Mass Communication at the Apeejay Stya University.

It could, of course, be the case that Ramdev is providing legitimate services for which the public is willing to pay. However, he remains mired in controversy, with investigations into allegations of land-grabbing and tax evasion ongoing. Another well-known religious figure is Sri Sri Ravi Shankar, Forbes magazine’s fifth most powerful person in India and founder of the Art of Living foundation. “Ravi Shankar is seen as the ‘posh’ and acceptable face of religion,” explains Professor Alam. His organisation targets the growing ranks of executives and professionals of corporate India that have waded into the upper-middle classes on the back of an economic boom, but still seek spiritual fulfilment. With a vision for a stress-free world, his World Forums for Ethics in Business and honorary doctorates are all indicative of a higher-brow audience. Nevertheless, like Ramdev, the “filthy rich” Ravi Shankar also faces a number of allegations, and many like Professor Alam believe him to be “corrupt to the core”.

The widespread abuse of religious trust becomes particularly insidious when it spills over into the political realm. In an event pitched as a yoga camp in a North-East Delhi constituency, a few days before this year’s general election, Baba Ramdev’s initial prayers to thousands of followers slowly morphed into a carefully-worded political message, “He evoked mythological demons…who will be killed by voting for a ‘good and nationalist party.’” according to a Times of India report on 8th April. Ramdev was referring to the Bharatiya Janata Party (BJP), a  Hindu nationalist party. “Even as the BJP has been claiming that yoga guru Ramdev and spiritual guru Sri Sri Ravi Shankar have not held any rally or public meets for the party, the chairman of the Delhi unit’s election campaign committee VK Malhotra admitted that they have indeed held several meetings,” states an article from the Hindustan Times.

The relationship between the religious and political elites is a symbiotic one. In return for political endorsement and fatwas, Ramdev and others are granted tacit immunity, as well as the public platform to generate enormous amounts of wealth. As long as the Shahi Imam continues to openly declare his support for the ruling Congress Party, he will carry on living comfortably in the gardens of the Jama Masjid.

This state of affairs has dangerous repercussions that strike at the very heart of India’s constitution. Where secularism is normally understood as the idea that politics has no religious basis whatsoever, or even perhaps the equal treatment of all religions, in India it has taken on a warped meaning. “In India’s political lexicon, ‘secularism’ became synonymous with ‘tending to the Muslim vote bank’. In practical terms it meant the verbal appeasement of Muslims, especially before elections,” explains Shahid Siddiqui, a former MP and now editor of Nai Duniya (New World), an Urdu weekly based in Delhi. “‘Secular’ leaders made a beeline to get political fatwas…so that Muslims were herded like sheep to vote for saving secularism. Later we realised that it was not to educate Muslims about secularism but to create the fear [of Hindu India]…making Muslims vote for Congress unquestioningly.” Siddiqui’s revelations as chairman of Congress’ Minority Cell are even more startling: “I was surprised to discover that all its meetings began with recitation of Qur’an. I stopped this practice as I considered it a religious activity not suitable for a secular party. However, this was held against me by my secular colleagues in the party. Whenever I spoke about socio-economic and educational problems faced by the community, I was told by Congress’ highest leadership that Muslims voted out of fear and not for development.”

Democracy in India will remain distorted as long as religious leaders wield such great power. But what is it that gives these individuals such force in a country so diverse in terms of religion? More than 25 per cent of British people identify as non-religious; indeed, the European ideals of civil liberties and the practical separation of religion from public life are contrasted starkly with the post-Independence need to submit to servitude. It is almost as if religion was forced into the power vacuum that the colonial elite left behind.

Things will change, of course, as 150 million new voters look for real policy and inspired leadership as opposed to blind subscription. Vote swings are becoming more common. But political misdealing is just one aspect of the perilous powder-keg of power that religious leaders control. “Every second person knows they’re corrupt. It’s a gut feeling,” says Professor Alam, and they will continue to be so until democracy and economic conditions mature enough to cast aside their overt and undisguised influence over the faithful.