Swarms of Hell’s Angels swamp people’s homes while they are on holiday, changing their locks and inviting the local drug lord round for tea. So goes the powerful and cruel myth of squatting. 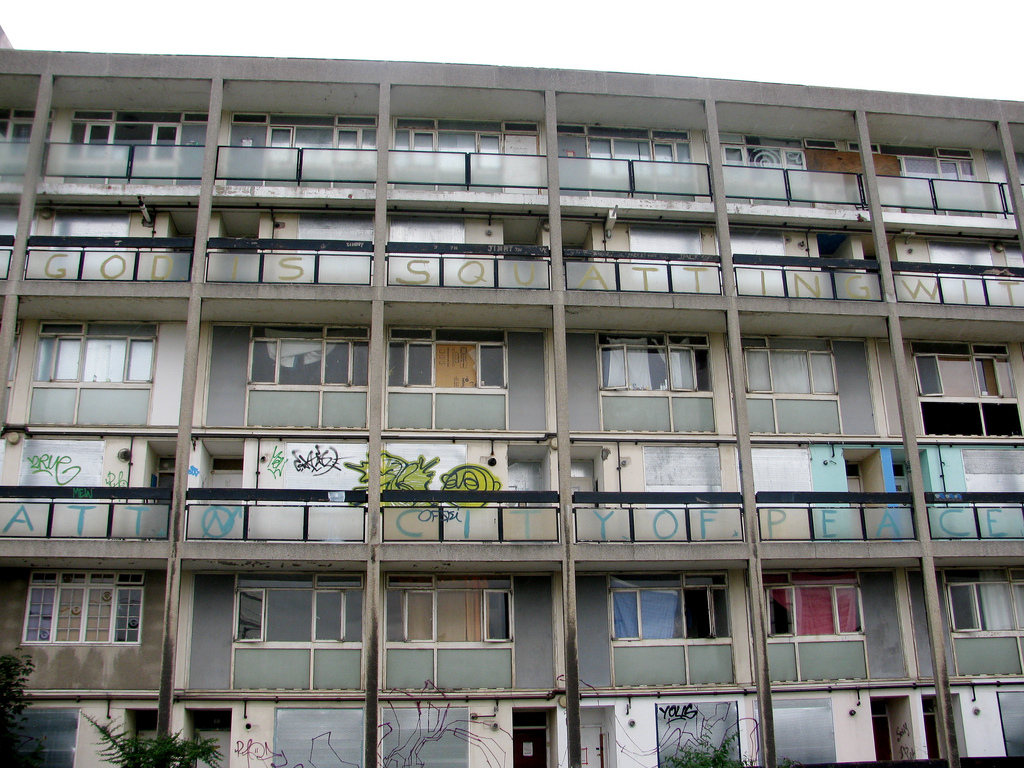 Putting two and two together has been the last ditch attempt of many vulnerable people to keep a roof over their head. They squat in buildings that stand empty as they await development, repair or demolition. But despite the protection of four walls, squatters are only ever an eviction notice away from the streets.

This instability is due in part to the media reactions of the ’60s and ’70s, when the last major wave of squatting movements took place. Prior to this, people were tolerant: “The bad things about it were very much exaggerated by some of the local press, not all local press: it was mixed, because squatting was ambivalent then,” remembers ‘Weed’, a well known contemporary squatting activist, in the University of Oxford-led Around 1968 oral history project. But in 1969, the media went on the attack ex nihilo. In one example, an attempted squat in 144 Piccadilly was keenly scrutinised. Sub-sequent demonising coverage fuelled a panic among home owners. The paranoia produced is still reflected in the vindictive anti-squatting laws of today.

The occupiers of this empty mansion were the London Street Commune, a loosely organised group of mainly younger, single people who were excluded from the normal routes to social housing by their marital status. They lived peacefully until a skinhead gang attacked the home with a barrage of stones. The occupiers used water filled containers in relatively harmless retaliation.

The police force cleared the building soon afterwards. One policeman made a beeline for the roof where he waved his truncheon in triumph, riding on the hostility generated by an equally gleeful press. “It offended all their sense of propriety regarding everything,” remarks Weed. These “hippie thugs”, screamed the Daily Telegraph, were a threat to society. Whose society? The homeless, it seemed, could not claim the privilege of being part of it.

Journalists described a decadence that simply did not exist. Weed alludes to the poverty that squatters at Grosvenor Square had been left to flounder in: “There weren’t a lot of meals, there wasn’t a lot of food around, it was basically sort of living off […] scraps.” Nor were they seeking to abscond from justice for the thrill of it—squats were an unstable last resort for people who had no choice. The squatting inhabitants of Eel Pie Island Hotel wished to legitimise their claim on the derelict building, but Weed laments “It would have been impossible to get people to put the money up to buy it, it would also be impossible once it was bought to keep it together.”

Those who did match the prescribed criteria of the respectable nuclear family were tarnished too. The London Squatters Campaign was set up in November 1968 at activist Ron Bailey’s house, aiming for “the rehousing of families from hostels or slums by means of squatting”. Participants took possession of homes in Ilford that the Redbridge Council had planned to leave empty for ten years pending a redevelopment project. The government’s response was ugly: in lieu of a court order, bailiffs forcibly removed three families from their peacefully acquired homes, breaking one occupant’s jawbone in the process.

“I don’t think we, in our wildest dreams, expected the extremity of the actions of Redbridge Council, applying the armed thugs to get us out,” Bailey recalls in Around 1968. Today, squatters might be more pessimistic. They squat in the long shadow cast by the ‘hippie thugs’ of the ’60s and ’70s, old effigies which more often than not were carved by a prejudiced media and proliferated as the stuff of home owners’ nightmares.

September 2012 saw the reification of this fear in an amendment to the Legal Aid, Sentencing and Punishment of Offenders Bill. Squatting in a residential building was criminalised under Section 144—the same number as that ill-fated squat in Piccadilly. This coincidence seems smugly deliberate in light of housing minister Grant Shapps’ explanation: “No longer will there be so-called ‘squatters rights.’”

Bailey describes a frustrating dialogue with squatting cynics: “’What about squatters who smash up the place?’ To which I say, yeah, some squatters behave anti-socially. So do some politicians, actually. Squatters in the main just are like anybody else, they want somewhere to live, and they behave in a perfectly decent way, almost all of them.”

Proof for Bailey’s assertion abounds. In many residential neighbourhoods squatters have been welcomed with arms outstretched as they reanimate rotting structural corpses with homely repairs. Weed lists the extensive home made regeneration projects undertaken by Grosvenor Square squatters in the ’70s: “… a cafe and shop and warehouse, and we got for a limited time the arts centre going.” Today, ‘Transition Heathrow’ is a community activist group that recently cleared tonnes of rubbish from an abandoned market garden site in Sipson. The site now plays host to a greenhouse converted into eco-friendly homes and an organic fruit and vegetable garden. These occupants are looking for the chance to be participants of society, rather than left in the cold as thugs.

Catherine Brogan of Squash, a campaign group which opposed Section 144, says “It’s the wrong time to be criminalising homeless people. Rents keep going up. Vulnerable people are being de-monised. This will benefit landlords who leave their premises empty.” The epicentre of the squatting conflict rises from the clash of two opposing ideals. The right to shelter and the right to absolute property ownership are in constant conflict. It is difficult to reconcile the obligation of the community to protect the homeless with an individual’s claim on their personal possessions.

The most poignant portrait of the squatting debacle might be found in the case of David Gauntlet. Homeless after the disintegration of a long-term relationship, he was warned in February 2013 by Kent police not to seek shelter in a boarded up empty bungalow that was due for demolition. Days later he was found on its doorstep, dead from hypothermia. The distance between Gauntlet’s reality and the fiction of the delinquent squatter is obvious. But Section 144 caters to the myth of the Hell’s Angels; it seeks to close the gap by fashioning people like Gauntlet into criminals.