“…but this isn’t New York City, or the Windy City, or Sin City, and we’re certainly no one’s Emerald City.

This is the Motor City – and this is what we do.”

This strategically released Chrysler advert, watched by over 111 million viewers at the 2011 Super Bowl championships, has a lot to say about Detroit’s grit and determination. It was aired just as the city – along with the rest of America – was beginning to crawl out from the financial collapse of 2008 after the bankruptcy of Chrysler and GM, two of the three carmakers that form the backbone of the American motoring industry and an integral part of the Motor City’s livelihood and cultural identity.

Detroit is still suffering from severe urban blight. In 2013, there were 78,000 abandoned structures and 66,000 abandoned lots across the city. An estimated forty percent of the city’s streetlights didn’t work. Unemployment rates, at 23.1%, rank amongst the highest in the country. This painful history can be traced decades back. Detroit has remained amongst some of the most dangerous cities in America for over twenty years running. The city has been plagued by race riots, migration, outsourcing and factory closures, unemployment, and crime rates five times higher than the national average. Car company losses and bailouts finally led to the declaration of Detroit’s bankruptcy on March 1st, 2013 – the largest municipal bankruptcy case in U.S. history. Detroit is “a town that’s been to hell and back”.

Detroit is Motown, the birthplace of the hits that changed America and with it the world, but also Eminem, Madonna, Jack White and Sufjan Stevens.. But it’s also a ghost town, around its broken centre of clustered skyscrapers and Tigers stadium. 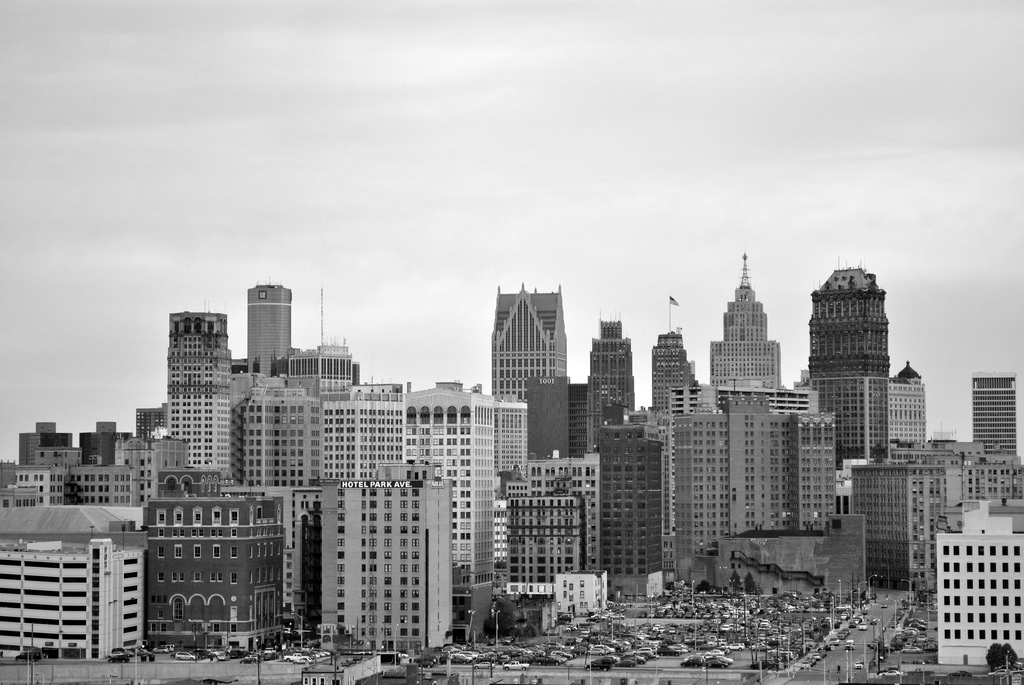 View from the roof of the Hotel Fort Wayne.

The city’s fall from grace has been well documented. “Detropia”, a 2012 documentary by directors Heidi Ewing and Rachel Grady, is a “quietly devastating” (New York Times) ninety minutes of haunting imagery from the depths of the recession, the culmination of a deeper crisis that was brewing for decades. It paints a city on the brink of collapse where people have little left but to start a (positive) revolution. TIME ran a cover story in a similar vein in 2009, entitled ‘The Tragedy of Detroit – How a great city fell and how it can rise again’.

Government regeneration projects are in progress, but they are slow and cripplingly expensive. Today people no longer wait around for the government to solve their problems. Instead they’re seizing the opportunity to profit off a city on the rebound.

Architecture aficionados and young professionals are snapping up property at bargain prices, including the remodeled Mies van der Rohe apartments and townhouses within the architectural gem that is the Lafayette Park complex – an unfinished urban utopia from the sixties designed to keep the middle classes within the city. 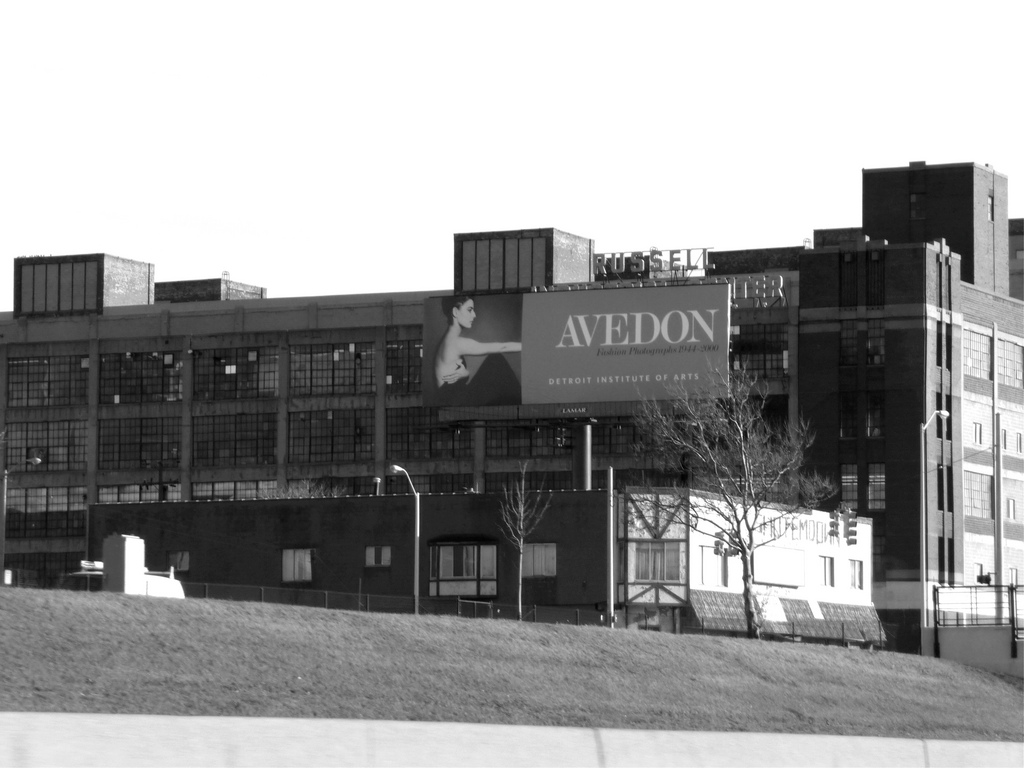 The Russell Industrial Centre as seen from the window of a car speeding down I-75. It began as a manufacturing facility but is now reclaimed by artists.

The city is coming full circle it seems, with the revitalisation of the Russell Industrial Center being one of the many urban renewal efforts seen around the city today. Designed by Detroit’s main visionary, Albert Kahn, the sprawling manufacturing facility was turned into a seven building haven for artists and small businesses, housing the largest artist community in the Midwestern region. Now an official community of over three hundred artists, it began with just a handful who first broke in over twenty years ago and claimed the deserted spaces their own. 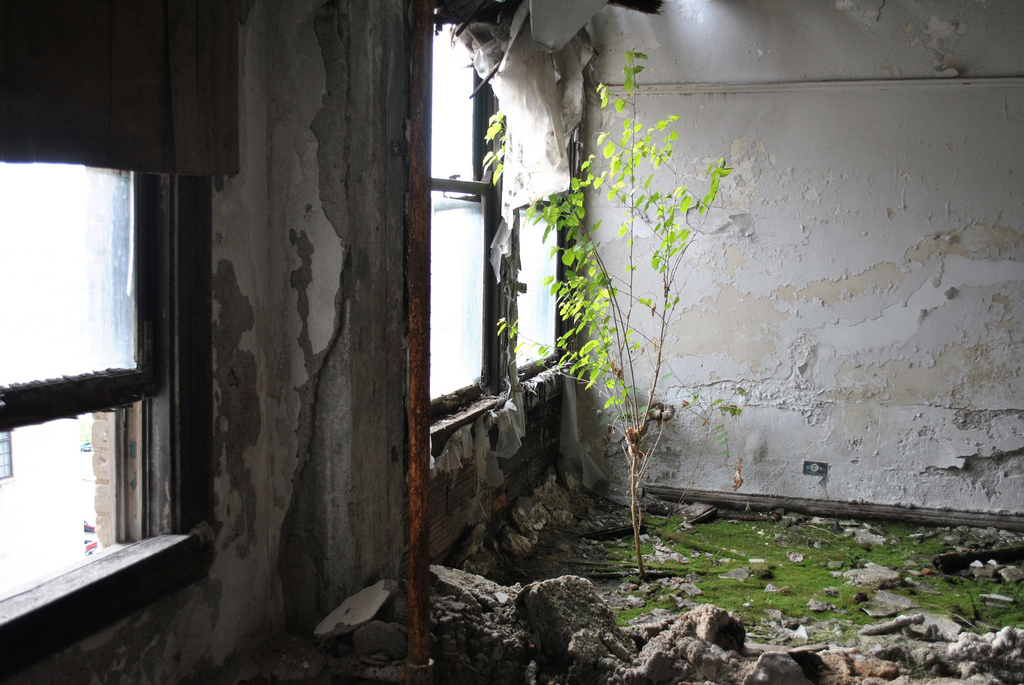 A tree growing inside what once was a hotel room of Hotel Fort Wayne.

This nerve characterises those reinventing the city. Everyone is carving out their niche amongst the urban remnants. The streets see people jogging, riding bikes, walking dogs, and running errands, just like in any other metropolis. But Detroit of course is not any other metropolis. Derelict buildings still stand like scars from an era not yet over. They remain beautiful despite their decay. In the centre of a room of the abandoned Hotel Fort Wayne grows a tree, bright green amongst the debris.