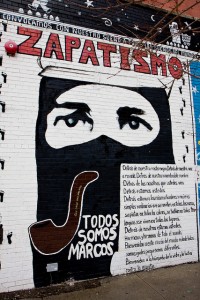 Spanish conquistadors built the southern Mexican town of San Cristóbal de las Casas in 1528 as a military fort. Its colonnaded streets and landscaped plazas were once the preserve of rich Spaniards, while the high city gates served to keep out indigenous Tzotzil and Tzeltal tribes from the surrounding hillsides. Today, members of these Mayan tribes sell woven blouses along San Cristóbal’s cobblestone streets; they attract a steady flow of cash and tourists, but are among the poorest communities in Mexico’s poorest state, Chiapas.

The Zapatistas launched an insurgency in 1994 in response to the North American Free Trade Agreement (NAFTA), which looked set to allow cheap food from the US to undercut crops produced by Mexican farmers, widening the existing gulf between Mexico’s rich and poor and disproportionately affecting indigenous communities. On 1st January 1994, the Zapatistas seized towns and cities in Chiapas and freed every prisoner in the San Cristóbal jail.

The Zapatistas were mainly indigenous Mayan Indians. They demanded autonomy and full recognition of indigenous people’s civil rights in the Mexican constitution. Led by Subcomandante Marcos—compared incessantly to Che Guevara by the media—the Zapatista Army of National Liberation drew on neo-Marxist feeling that had been brewing in the rugged terrain surrounding San Cristóbal since the 1970s. Marcos rejected the title of leader, insisting that his black mask served as a mirror. He held that the true leader of a popular movement could only be the people themselves. The eyes that stare out from the postcards on Real de Guadalupe are defiant; the disparity between the intentions of the Zapatistas’ Far Left cause and the subsequent commercialisation of it (through postcards and knitted dolls) amounts to a black irony.

Travellers attracted by the town’s turbulent political history—‘Zapatourists’—are brought in by the busload on roads built by the Mexican government to crush the 1994 uprising. While Zapatismo aimed to curb globalisation, it in fact prompted an influx of expats, who have set up Spanish wine bars and French bistros along the Real de Guadelupe. Dreadlocked European backpackers tread the familiar path of dinner, bar, club, and finish up in Café Revolución on the town’s north west side.

Revolución is a packed salsa bar with live music and generous tequila shots. Students from Mexico City collect in the smoking area fervently discussing politics, as Daddy Yankee’s ‘Gasolina’ is pumped out in the upstairs bar. The name ‘Revolucion’ captures the imagination but also serves as a reminder of Marcos’ failures.

The Mexican army responded quickly and brutally to the uprising, killing at least 146 insurgents in bomb attacks. After two weeks of conflict, President Carlos Salinas de Gortari declared a ceasefire. In the subsequent negotiations, indigenous communities reclaimed tracts of fertile land for subsistence cooperatives, 38 indigenous municipalities were given their autonomy, and independently-run schools were established for Indian children. It quickly became clear that the movement would neither launch a revolution nor stop NAFTA’s ratification. The huge economic benefits of NAFTA for all countries involved meant that the Zapatista movement was unable to derail its ratification: it has been in place since 1994 and tribes in southern Mexico have suffered as a result of US imports.

Since the uprising, the Zapatista Army of National Liberation (which still exists) has garnered support via the internet from organisations as far-flung as the Edinburgh Chiapas Solidarity group, which produces ‘Zapatista coffee’ to raise awareness for the Zapatista cause, and Palestine. Support from afar is welcomed by the Zapatistas, who subscribe to an ideology of ‘alterglobalisation’, which calls for positive international cooperation but rejects the elements of globalisation that compromise small communities and ravage the environment.

Deforestation continues in southern Mexico, ruining hillsides where Mayan Indians live. Financially, indigenous communities in Mexico have not seen a marked improvement since 1994, but the Zapatista movement did manage to shake investor confidence in Mexico’s economy. The uprising did not result in the redistribution of wealth, but it did make rich Mexicans slightly poorer. It contributed to the downfall of President Salinas and it heightened awareness of Mexico’s indigenous culture.

Zapatismo is not finished yet. However, the movement has become stuck somewhere between its two primary goals, economic improvement and cultural autonomy. ‘Zapatourists’ have improved the Chiapas economy, but the indigenous population remains poor and largely powerless. The Mexican government is nominally committed to the preservation of indigenous cultures in the South, but cooperation between state and tribe is dogged by rancour, backlash and contradiction.

Along with foreign tourists, Mexican sociology and anthropology students inundate San Cristóbal’s bars. They are sent by universities to Mexico’s southernmost parts in order to observe indigenous communities and understand the customs unique to each tribe. They follow a long tradition of San Cristóbal anthropologists: most notable among them is Frans Blom, a Danish anthropologist, who lived in a large house on the outskirts of San Cristóbal in the early 20th century.

Blom’s house is now a museum whose hallways display notebooks filled with diagrams and recollections of time spent among tribes in the hillsides around San Cristóbal. The notebooks make for fascinating and uncomfortable reading. In an age where the line between one society and the next is blurred by shared cultural reference and multiculturalism—as in San Cristóbal—the careful cataloguing of a tribe’s ‘otherness’ seems to preclude entirely the notion of mutual human understanding.

In Mexico, I sat one evening in the courtyard of Na Bolom on the Isla Mujeres and a girl wearing a One Direction necklace approached me and asked me if I was English. Having seen music videos that featured the band, her dream was to go to England. I had come to learn about her country, she had gathered information about mine, and was using me to learn more. This kind of cultural exchange is advocated by proponents of alterglobalisation, but, in extremis, leads to the kind of cultural disenfranchisement that Zapatismo wanted to guard tribes against.

Alterglobalisation is an attractive idea: it evokes a global village, a huge society which preserves cultural identity while promoting cultural exchange. Trade supports communities, providing financial security without exploitation. Zapatismo aspired to these ideals, but the legacy it leaves is largely symbolic. NAFTA was not overthrown, and Mayan tribes today are not prosperous or autonomous. Zapatismo’s failure proves just how difficult it is to find a balance between cooperation and homogenisation, between small communitiesand titanic market forces. While people buy coffee to support the Zapatistas in far-off Edinburgh, Mexican teenagers are dancing to One Direction videos in their bedrooms.