Croatia acceded to the European Union on the 1st of July 2013. The Eurozone is slowly recovering from the biggest crisis in its history, and faces pressure from an increasingly vocal Eurosceptic movement. As an already independent open market country, the impetus behind Croatia’s accession may not be immediately obvious. However, the nation is only a short ferry ride across the Adriatic from Venice, and a neighbour of EU member state Italy. With its long coastline and multiple white beaches, the nation has attracted holidaymakers from Richard Burton and Elizabeth Taylor to the Queen. From Rijeka to Zadar to Dubrovnik, Croatia’s coastal city-states, largely former Venetian ports with well-preserved Renaissance architecture, rival those of Italy. Croatia is very much at the heart of Europe.

Ask any restaurant or hotel owner in Dubrovnik about the EU and you’ll find their main concern is the dominance of the cruise liners that descend on the coast every summer. The ships sail in daily, towering over the city and spewing thousands of tourists onto Dubrovnik’s streets. The tourists buy little but trinkets, take in the city in the minimum time possible and then board again a few hours later for their night’s food, drink and entertainment. The city receives no tourist tax to pay for the restoration of the old town, and little business for its hotels, bars and nightspots. Despite their protestations, the city’s workers appear resigned to the dominance of the cruise ships. Its people have always been often subject to the rule of others: once it was Romans, then Hungarians, then Ottomans – now it is hordes of marauding cruise ship travellers. 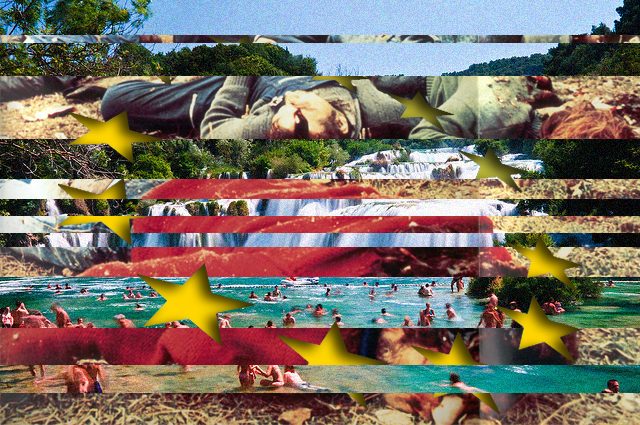 That said, Croatia has just celebrated its highest ever annual revenue from tourism. For tourism minister Veljko Ostojic, “the goal is to achieve or surpass seven billion euros” in income this year. Yet tourism aside, the Croatian economy has barely grown since 2008, and has felt the full effects of the Eurozone crisis even as an outsider. Will Bartlett, a senior research Fellow in the political economy of South East Europe at the London School of Economics, believes that “The EU will not be a panacea for Croatia’s economy.” Its economic stagnation mirrors the problems occurring across the southern states of the EU – a high budget deficit, rising national debt and a lack of competitiveness mixed with the corruption seen in other post-communist eastern European states. Accession, for the moment, is no guaranteed catalyst for recovery.

Croatians themselves are more hopeful, especially those in government such as Tonino Picula, head of the Social Democrat delegation to the European Parliament, who referred to increased federal cashflow from the EU in saying that “The ‘carrot’ has become… larger and more appealing.” From July, the “transition from €150m yearly to over a billion from the structural and cohesive funds now available is a dramatic one”. Access to EU structural funds will certainly help bolster regional development in the country. Entry into the European free market of tourism and trade and access to EU funds may form a partial resolution to Croatia’s competition issues and budgetary constraints.

However, corruption is still prevalent. Croatia is in the midst of cleaning up after its ex-Prime Minister Ivo Sanader, sentenced on corruption charges last year after revelations brought forward by his party’s treasurer. Investigators were told that he used to bring Mr Sanader “large bags of cash” channelled from public companies that the pair indirectly controlled via a public-relations firm. During the war, Sanader received a payoff worth nearly 3.6 million Kuna (£425,000) from the Austrian bank Hypo for facilitating Hypo’s entry into the Croatian market.

Sanader, the country’s Prime Minister from 2003 to 2009, is the most high-profile figure to have been arrested in Croatia’s recent anti-corruption drive – a drive which many believe to be a by-product of the increased pressure and scrutiny of EU negotiations. Following accession to the EU, the added threat of the European Courts to combat corruptive practices and war crimes has galvanized the nation into action. Sanander’s sentencing, though an ugly reminder of the past, may provide closure to a nation still smarting from post-war political scandals.

The wars of the 1990s, following Yugoslavia’s collapse, still loom large in the minds of Croatians. The effects of a war in which a quarter of a million were displaced, over 20,000 people killed and over 52,000 people disabled are still felt today. EU membership offers an opportunity to shake off the grudges and emotions of war now past. As a part of Europe, Croatia would no longer be so clearly bound to the rest of the Balkans. Serbia remains, for the moment, mired in confrontational nationalist politics. Despite European pressure it still refuses to recognise its southern neighbour Kosovo. Other nations, however, are following Croatia’s lead: Montenegro has entered negotiations and is well on the way to EU entry. The Former Yugoslav Republic of Macedonia and even Serbia have candidate status.

For everything membership brings, ordinary Croatians recognize that it is not a magic pill which will instantly overcome their country’s problems. Their continued integration into the EU will not let them forget the atrocities of war. For now, most Croats simply hope that membership will increase domestic stability and bolster their hesitant economy. After Europe’s failure of inaction in the 90s, membership may now give Croatia’s young democracy both the direction and the support it needs to continue its gradual route to prosperity.