Mount Athos is a monastic republic in northern Greece, which lies on a peninsula protruding into the Aegean Sea. It is an autonomous state under overall Greek sovereignty. Known as the Holy Mountain, Mount Athos is home to 20 Orthodox monasteries and roughly 2000 monks. The monks are the only permanent residents, visitors require special permission, and women are barred from entering. 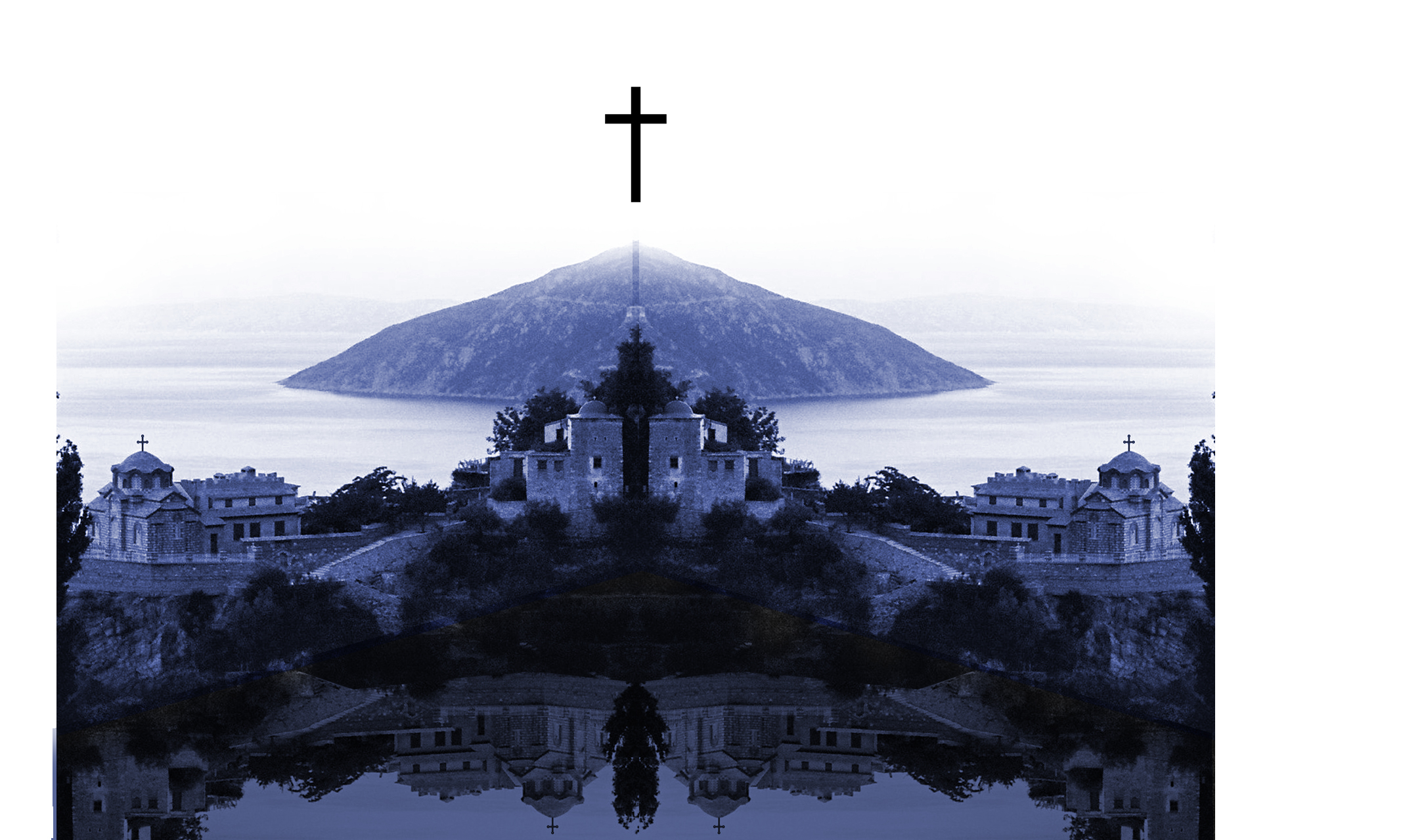 An aged bus turns up the winding mountain track, bringing pilgrims to Karyes. The verdured splendour of Athos unfolds over the mountain’s ridge and, from the back of the bus, through clouds of dust sent up by the wheels, the unmoving plane of the Aegean appears a thousand feet below. Athos is the middle of the three peninsulas that make up Halkidikie, a region in the north of Greece. This thin strip of land is covered in pine tree hills, along with monasteries and ancient mule paths, hewn out of rocks. As early as the tenth century, Orthodox hermits began to make this silent outpost their retreat. They were drawn by the solitude and peace of the peninsula – cut off from mainland Greece but for a narrow isthmus. The place is haunted by the spectre of the Holy Mountain.

Towards the end of the tenth century, advocates of ordered monasticism on the mountain won the support of the Byzantine Emperors. By the turn of the millennium, the settlement had converted from loosely scattered groups of hermetic cells to a system of ordered monasticism. Today, 20 monasteries survive, together with a number of sketes (small communities in hamlets) and solitary hermits. Since the 1980s, Athos has welcomed visitors, providing Orthodox pilgrims (and some non-Orthodox) with food and shelter for up to a week. Only males are welcome on the peninsula, making Athos the only statelet in the world that women are forbidden to enter.

As existence for Greeks outside the monastery walls becomes more difficult, the mountain is taking on greater importance in the spiritual life of visiting pilgrims. The art and architecture of the mountain are tangible reminders of Byzantium and an age when Christendom was at its strongest. They offer pilgrims visual contact with the splendour of Orthodox history, unchanged and unaffected by current financial upheaval: Athos is comfortably financed by ancient land grants, EU funds, and church money. The buildings, crammed with remembrances of early Orthodoxy, make Athos an oasis and a source of religious strength for visitors. On the boat to Dafne, a sea port on the southwestern side of the peninsula, the entry route to the mountain, one pilgrim animatedly puts this feeling into words: “The monks still paint icons here, and ride mules between monasteries. We visit and pray over the same relics as our forefathers, in the same churches, and listening to the same music. Here we can touch the origins of our religion.”

In the refectory at Megista Lavra, the oldest monastery, monks and pilgrims dine together in silence while prayers are read from a lectern. On the walls, frescoes depict Hell mouthing flames in rivers, the Last Judgement, the Last Supper, a Tree of Jesse (showing the ancestors of Christ) and the death of St Athanasius, the monastery’s founder. From the refectory one moves to the small narthex of the church, where paintings of saints date to 1535 and statues of two great soldier-emperors – the original benefactors of the monastery – stand atop pillars supporting the church’s nave. By the great bowl outside the church, a young visitor stands and relates with passion how, when the Ottomans came to Athos, they had wanted to take the bowl so that the Emperor could bathe in it. A monk, on hearing this, climbed into the bowl and began to demolish it with a hammer. The smile fades from the man’s face, and gesturing towards the gables above the now mended bowl, he says: “They hanged him there. But he saved the bowl.” From where he stands, Pantokrator and Emperor are visible, gazing upon the same vestibule and recalling a time when Empire and faith went hand in hand. From the frescoes and architecture and magnificent eagles carved into every door and mantle, the image of Byzantium and the power of Orthodoxy range forth, reminding pilgrims of their religious roots and strengthening their religious convictions in preparation for the return to the outside world.

Today there are around 2000 monks on the mountain. They line the central square at Karyes, the largest settlement, waiting to take pilgrims to their monasteries, wearing black robes down to their feet – a sign that they are dead to the rest of the world – and keeping great beards and long hair wrapped up beneath black caps. These are the “whiskered, brigand, fierce faces” of Patrick Leigh Fermor’s raki-drinking, pistol-wielding Athonite monks; so far from the pale, reflective complexions of Western monastic orders. For every monk there is a different tale of arrival. One young man who came to Athos at 18 tells how: “My family tried to bring me home, but there was nothing they could do. I came to live closer to God.” Monks come, in the words of St Basil, “to live without city, home, goods, society, possessions that the heart may readily receive every impress of the divine doctrine”.

Such a strong focus on contemplation makes it appear as though Orthodox monks are less concerned with society at large than their Western counterparts. No Orthodox equivalent of the Jesuits (the male religious order of the Catholic Church dedicated to action within the community) exists. We might fairly ask what relevance the monks of Athos have for the wider Orthodox church, immured in their monasteries far from all contact with the world. One answer lies in the inward service of monks, in prayers for the rest of humanity. But for most of us outside the monastery walls, the real value of such prayer seems hardly tangible. Another answer is in the ritual of service, haunting plainchant, and the relationship of the monks with pilgrim visitors.

At every monastery the Guest-Master greets travellers with a traditional welcome of raki (an alcoholic drink), Turkish delight and Greek coffee. Then pilgrims are ushered into their tiny cells. Service begins at 4am when a monk walks through the morning darkness to sound the bells. Then plainchant drifts through thick clouds of incense, and voices breathe round the cloisters growing light with the dawn. Most pilgrims attend this morning service, which in some monasteries lasts more than four hours. In the evening, visitors and monks come together again for final prayers. Pilgrims spend the hours in between quietly and alone, walking down to the sea or moving through the woods. During the day there is very little activity in the monasteries; the mountain seems to fall completely silent. For the 10 non-Orthodox visitors allowed onto Athos each day, this silence and the slow pace of monastic life gives insight into the peace repeatedly sought by pilgrims on annual visits. At sunset, after final service and dinner, pilgrims and monks gather in small circles outside the monastery gates. The monks, running beads through their hands, listen and give religious advice to travellers, looking out over the still Aegean, and the long rows of olive groves sloping down to the sea. The light fades, and the groups disperse, moving in silence back to their cells, till the last thread of pink leaves the horizon and the sun returns to her azure grove.