I always wanted to be a novelist. I wrote my first novel (well, an almost book-length adventure story) when I was twelve and by the time I went to university had subjected myself to a fairly intensive apprenticeship in novel-writing. I also wrote a mock-epic in the sixth form, approximately in the metre if not the style of Alexander Pope –

His eyes were bleary from the evening’s beer,
But though his tongue was furred his mind was clear –

We met on separate courses, different tracks,
We called across the intervening gap
Approaching briefly on opposing tacks
Like satellites whose orbits overlap
At intervals too vast to calibrate:
This is my final wireless message, sent
(Though not quite sure of the wavelength, range or date)
Towards the sector where I thought you went
When, as we span apart, each heading for
Our different stars, the chance that brought us near
Began to lose itself for evermore
Amongst competing chances, and the fear
That soon the earthlit image of your face
Will fade amidst the solitudes of space.

Actually this one is unusual amongst my poems in being an extended metaphor. Most of my imagery goes into my novels, where there is more room for it; my poems depend essentially on their rhyme and metre. Some people think this is ridiculously old-fashioned. Tennyson, or his mouth-piece Everard Hall, says:

. . . . nature brings not back the Mastodon,
Nor we those times; and why should any man
Remodel models?2

But of course the flavour of my subject matter is entirely contemporary: the two potential lovers allegorized as space travellers simply aren’t to be found in Tennyson or Browning. The sad fact is that many people think scansion and rhyme are in themselves, almost by definition, completely out of date. Yet when we try to discover what these people think is in date, up to date, still not at its sell-by date, we find that what they regard as the essence of the contemporary is unrhymed free verse that is dangerously close to chopped up prose, tricked out with a few colloquialisms and, if one is lucky, legitimized by an impenetrable metaphor or two.
Unrhymed verse, though it only became standard practice about fifty years ago, began its ascent to orthodoxy fifty years before that, early in the last century, at the same time as the literary movement known as Imagism. Imagism favoured colloquialisms and, especially, those hard knotty bits in the poems which need to be read and reread half a dozen times and which later became the staple of Practical Criticism classes. The Imagists, like their contemporaries the Post-Impressionist painters, also emphasized that art needed to be in some way contemporary and that artistic success depended on the quality of the contemporaneity – a notion that barely occurred to Coleridge or Keats, and would have been hotly contested by the Pre-Raphaelites.
For several decades now ‘modern’ poets have been pretending that writing in the style of 1913 is modern. The same thing has happened in ‘modern’ painting, which has made little progress since Kandinsky, perhaps since the late style of Turner. No doubt it would have been utterly wonderful to have been a contemporary of Kandinsky and Ezra Pound, and F. S. Flint, and D. H. Lawrence, but we are not: so we have to choose our own way, and we would look a little less like contemporaries of those other modernists of the Ezra Pound generation, Goebbels and Mussolini and Mosley, if we chose our own way on an individual rather than on a communal, march-in-step basis.
The way I chose was rhyme and scansion. I don’t know how this relates to the Zeitgeist: no theory that explains society will work if it does not also explain poetry, but I still haven’t found even my own private explanation of society, other than that it’s not all cuckoo-ism and conformism. I know that part of the reason why I chose rhyme and scansion was that if I wanted to write something that I couldn’t rhyme or scan, I was ready to write it as a short story or part of a novel. The main reason however was that I saw something positive in form. Rhyme and metre offered the possibility of a lapidary quality, of an arrangement of words that stood on its own, fixed, for all to see, as if for ever, as if carved on stone.
George Sylvester Viereck, an American poet, critic and ideologue who was a contemporary of Ezra Pound and eventually just as right-wing, wrote that poems should aim at ‘finality of expression’ and ‘solve without a remainder the equation between thought and utterance.’ In his view, ‘Form and content in poetry are co-ordinate. In order to achieve finality it is essential that the metrical coat should fit perfectly.’3 I’m afraid that a hundred years later I see my efforts to pull a poem together more like doing a cross-word: when I’ve got there finally there’s a sense of dove-tailing, and nothing can, let alone need, be changed. (My actual work process in writing my poems is probably more like devising rather than like completing a crossword but I have generally failed in the latter and have never attempted the former.)
Most of the hard work in any one of my poems occurs in the first hour: then I put the draft on the sideboard behind my writing table and for at least the next seven days read, reread, rethink, alter, copy, rethink, recopy and alter again until I’ve properly dovetailed it.
I wouldn’t want to call this process craftsmanship, to my mind either a spurious or a disparaging word when applied to writing; it’s not at all like cabinet-making, there’s too much lateral thinking, too much listening to inner echoes in one’s own mind, too much roaming free in private territory for it to be anything like a handicraft: but the term dove-tailing gives the idea of the sense of completion at the end. And what do I have then?
Coleridge in his Table Talk said that prose is words in their best order, poetry the best words in their best order. This does not really go far enough. The ordering of words in prose is with a view to communicating meaning, and perhaps also atmosphere, and, intentionally or inadvertently, personality. The ordering of words in poetry is with a view to adding to the words and their own suggestiveness an element otherwise inexpressible. The words themselves might be pretty banal:
I want to make something with you
So that the magic in what you do
The vibe that goes from your bones to your work
Becomes my magic too.

I want to put the best of me
In a shared design that gives the key
To the dreams and the hopes and the loves of the world
Till at least the twenty-second century.

But even more I want to see
New existences take shape
That comes from your eyes and your will and your hands
In some way because of me.*
It’s the otherwise inexpressible that is the essence of poetry, just as it is of music. Poetry, like music, is form.
It’s not that I am uninterested in words. I sometimes jot down strings of words that may or may not be semantically connected, float, flit, flatter, flutter, fluster, or snore, snort, snout, snot or ruck, pluck, shuck, buck, chuck, yuccch and have even experimented with something between a poem and a diagram:

I have also tried my hand at something like haiku, as in this reminiscence of Oxford:
Behind Gothic doors
would-be Walter Paters
interrogate lost youth,
sometimes, for example describing the apartment complex recently built beside the New River at Woodberry Down, also experimenting with internal rhymes and alliteration:
Paired swans share weed-haired waters where
spare Modernist square apartments stare.
But words are essentially not complete in themselves but components one puts together. I am by no means sure that in my putting of words together I have ever achieved what most people would regard as the ultimate essence of poetry, the phrase or distich that gives the reader goose-bumps, transforms the day, and vibrates in the imagination long afterwards, Keats’s evocation of Ruth standing ‘in tears amid the alien corn’ for example, and the nightingale’s song that
*I wrote this poem in 1996 for the artist Jennifer Lewis (1966-2012), who was gunned down last summer by intruders at her mother’s home in St. Vincent.
Charm’d magic casements, opening on the foam
Of perilous seas, in faery lands forlorn.

It’s surely not for me to say if I have ever come anywhere near that in my verse. I certainly think I’ve come closer in my novels: but a novel pulls the reader into a whole world of the writer’s imagining, where one submits for hours to the manipulations the writer is trying out on his audience, whereas the point about my poems is how short they are, and transparent enough to be understood at a first reading that takes barely sixty seconds, and intended to go ‘click’ in the reader’s mind immediately or not at all. Of course I want people to re-read my poems, but not because they have to re-read them in order to figure out a meaning, and whether the meaning is worth figuring out, but because they work just as effectively on re-reading as they did the first time around.
A novel might be a world the reader can be lost in, but I want my poems to be capsules they can absorb into their own world, their own life. If I wrote music I would want to write music that people hummed on the street. Why not? I know some people write music mainly to show musicologists how clever they are, but I don’t need to do this in verse. I have already, to date, written eight historical or literary-historical monographs to show how clever I am, and three of them went into paperback pretty quickly.
All I ever wanted in my poems was to capture and encapsulate and as it were fix in stone a thought, a feeling, a perception, and for me it was the process of capturing and encapsulating that was more important than the feeling or the perception. If I have been less successful in putting feelings into words than in putting words into feelings, the truth is I never was that sure of the value of my feelings, and coming to poetry relatively late, I had of course moved on somewhat from the pristine urgency of teenage subjectivity. And even as a teenager it was not quality of feeling but quality of writing, and technique of writing, that was my chief preoccupation.
It is more than two centuries since William Wordsworth denounced ‘poetic diction’5 The ‘modern’ rejection of scansion and rhyme is a latter-day counterpart of the rejection by critics like Francis Jeffrey of Wordsworth’s experiment to free poetry from the eighteenth century’s high-sounding circumlocutions, and exhibits exactly the same psychology of reliance on irrelevant authorities and denial of other people’s right to mental independence.
This essay is about how I, A. D. Harvey, write poems. It is not meant to be about how other people ought to write poems. There never was a single way to write poems, or a single way to write poems in a given century. The poetry of Milton is not rubbish because it is not like the only-a-little-earlier poetry of Shakespeare. My poetry might be rubbish compared to Andrew Motion’s but it is not rubbish simply for the reason it is unlike Andrew Motion’s in its scansion and rhyme. 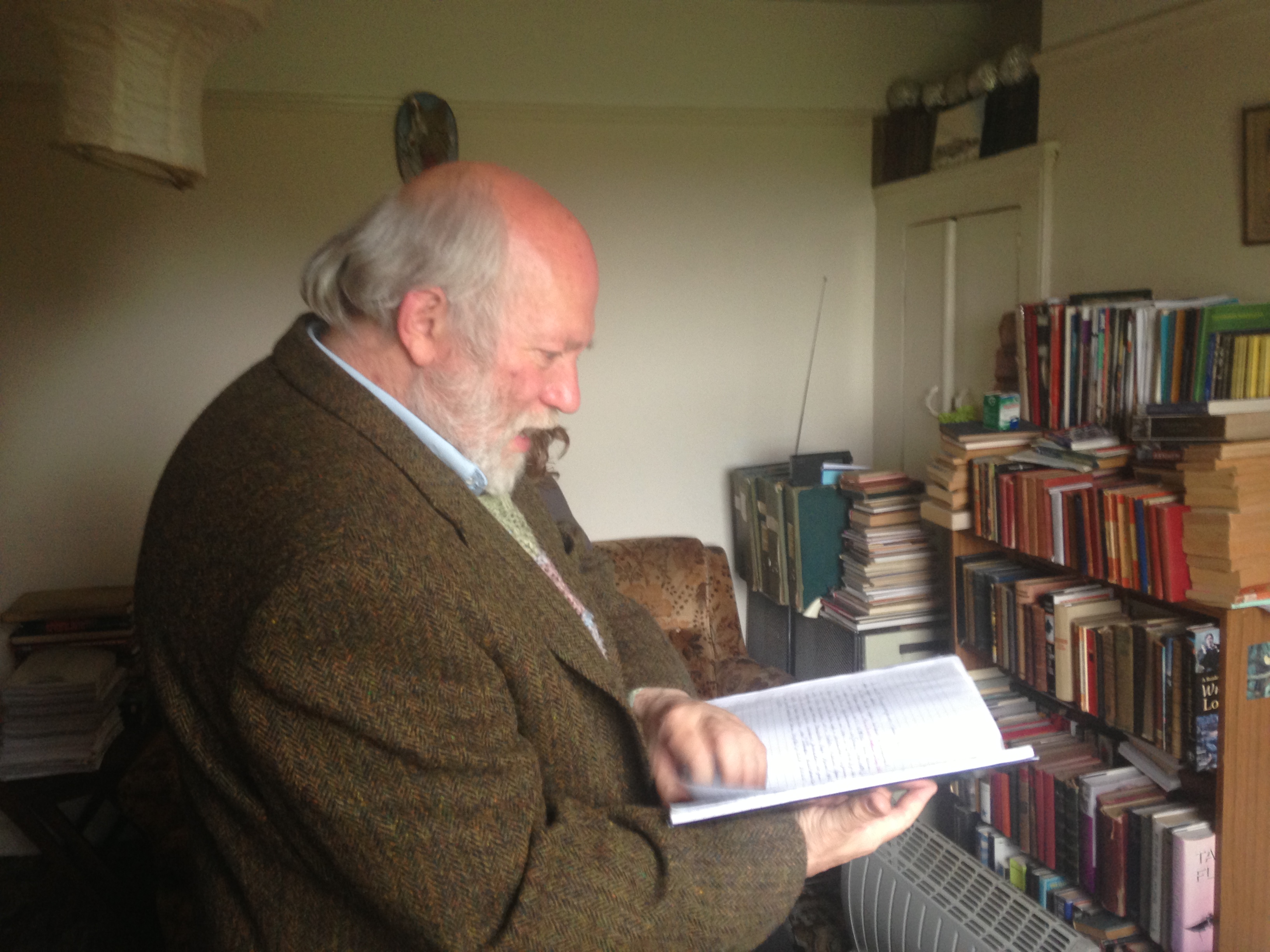