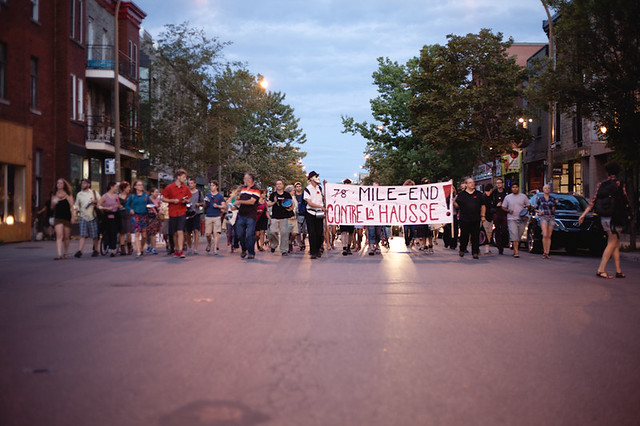 The realisation that something is happening in Montreal breaks slowly when you stay in the city. Perhaps it’s the nature of what is going on- a form of protest that has been ongoing for many months, and is now part of everyday life. After a few weeks in the city, many unexpected things come to seem normal. Small red squares of fabric are worn by seventy-year old native Quebecers as well as by those who arrive from around the world to study in the city with North America’s highest concentration of students in higher education. Public noticeboards stand encased in layers of protest posters. The city’s graffiti loudly proclaim ‘‘la grève continue’’. These are clues to divisions that currently exist within the city of Montreal, and the province of Quebec.

The divisions stem from a decision taken by Quebec’s provincial government, led by Premier Jean Charest, in March 2011, to raise tuition fees by three-hundred and twenty-five dollars per year (about two hundred pounds), over the coming five years. Two aspects of the events distinguish the Quebec  tuition saga from the British. The first is obviously the scale of change, with increases in Canada minuscule compared to the huge rises recently brought in under the coalition government. However, it is the second comparison which is perhaps the most extraordinary, and undoubtedly one which is vitally important for students and student unions throughout the UK to understand. In Canada, the public mobilised to cripple the education system of Quebec, through widespread student strikes, and frequent protests. In the UK in 2010, damage by a minority to conservative headquarters, an attack on Prince Charles’ car, and one student swinging on a flag at the Cenotaph created a backlash of public opinion. The protests did nothing to halt coalition progress.

In June of this year, NUS president Liam Burns announced new protests, to take place in London, in November, against fee rises which have already taken effect. In September, newly elected Pauline Marois, leader of the separatist Parti Quebecois, announced that Charest’s proposed fee rises will be brought to a halt. It is clear that now is a time in which many within the UK could learn valuable lessons from their Canadian counterparts.

Kelly Sheehan-Heath has grown up in Montreal, and describes the situation: ‘‘Quebec has always been proud of its low school fees and how it has been seen as a refuge.  A place where school was usually easily accessible.’’ This history of university access is not mirrored in Britain. However, proposed increases would have been the largest seen in Quebec, and opponents cited many of the dangers that have been pointed out in the UK; preventing vulnerable students from entering higher education, saddling graduates with decades’ worth of debt, and failing to guarantee savings in government spending.

In addition, differences exist as to the extent to which either the UK or Quebec can be described as welfare states, and Quebec does have a history of student action against tuition rises. However, it is really the organisation of groups within Quebec that has made success possible. Province-wide federations have been able to bring student associations together.  Micah Langer, who graduated from McGill in June, explains: ‘‘The federations promote and coordinate communication between student bodies, and mobilize people for protests and actions. All that energy and experience provides a deep reservoir of inspiration for grass-roots contribution to the movement.’’ Sheehan Moore, a 4th year art and history undergraduate at McGill, sums up the situation ‘‘I realize it’s a bit of a simplistic analysis, but really, just having on one hand, the conviction that action taken may actually succeed and, on the other, a whole multi-leveled network of avenues of mobilization, makes a huge difference when it comes to moving hundreds of thousands of students out of the classroom and into the street.’’

These methods of mobilisation have proved to be extremely effective, and provide an interesting contrast to the ideas given by Liam Burns in his recent speech at the NUS national conference. While emphasisng the need to recognise and work with those involved in grass-roots campaigns, Liam described the work of student unions as ‘‘not good enough’’ in recruiting student activists, suggesting a system in which NUS announces protests, with unions left to recruit.

The situation escalated in May, when Quebec’s National Assembly passed Bill 78, ‘‘an Act to enable students to receive instruction from the postsecondary institutions they attend’’. Despite the innocuous title, this law produced a massive outcry, in many cases from human rights lawyers, because of restrictions to protests. Micah points out ‘‘Ironically, though not surprisingly, Bill 78 was a huge motivator for activism.  As the bill was proposed and passed into law, people from all walks of life began to take notice and get angry.’’ Sheehan continues that ‘‘at this point the goal is not just free education but a dismantling of the entire neoliberal system that turns education into a product we comparison-shop for.’’ And incidents of police brutality have also drawn many to the cause. In March, a flash-bang grenade thrown by police blinded a sit-in demonstrator. In May, a 47 year-old man was attacked by charging policemen, suffering severe wounds to the head.

Similar events such as the death of Ian Tomlinson at the G-20 summit protests in 2009, or the use of kettling by British police at student protests have not led to similar reactions from the British public. Perhaps it is due to differences in perception between the public in Quebec and the UK; for example, Sheehan mentions what he sees as the importance of ‘‘diversity of tactics’’ for Quebec protests. ‘‘It’s important to view marches, blockades, sabotage, sit-ins etc. as all being possible tactics oriented towards similar ends… If I’m marching and you’re smashing bank windows, I recognise we’re engaging in the same struggle… If the movement had been only peaceful marching in the street, free from any sort of coercion or disruption, it would have fizzled out immediately.’’ David J. Townsend, OUSU President, stresses this difference, stating ‘‘Quebec is linked to the vibrant French republican tradition of mass action; the UK has a constitutional monarchy’s tendency towards civil discussion and lobbying.  That means that the effectiveness of protesting, and the receptiveness of people to it, are going to be different in each country.’’

So, while Quebec students are now left to wonder where a newly elected minority government will take their province, students in the UK are left with a movement that has fizzled out. Many in the NUS remain optimistic at the thought of upcoming protests this November, but this time around, the tactics will have to change. Just how student leaders combat student apathy and fatalism remains to be seen. David J. Townsend stresses the upcoming election: ‘‘British students haven’t yet had the opportunity to express their feelings… at the ballot box- but you can bet they will.’’  Whether in terms of protest or the vote, it is clear is that there are lessons to be learnt from Quebec.