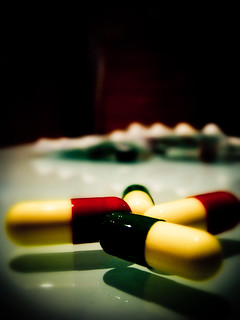 In the film Limitless, Bradley Cooper’s character Eddie discovers a little transparent pill, NZT-48, which equips him with super-human intelligence and transforms his life. In Jonathan Franzen’s novel The Corrections, Edith assuages the plagues and pains of old age by illicit prescription of Aslan© pills for any occasion, a Narnian panacea.  Twenty-first century fiction is fixated by the mind-boggling powers of modern drugs and the ease with which they could lift us from the flaws of circumstance and the imperfections of personality. Drugs, like sex and bloodshed, sell. But does fiction’s preoccupation – be it fear or fascination – hint at a deeper concern about where we are headed?

Readers and audiences rest assured that whilst Aslans and NZT make for ripping yarns, the realistic capabilities of modern medicine remain a far cry from their far-reaching effects. But as the century edges forward, so does neuropharmacology. And though it will be some time before drugs can solve human fallibility, already the capacity of ‘smart drugs’ such as Ritalin and modafinil to enhance human brainpower is advancing at an unprecedented rate, with the result that consciousness is being modified in both sick and healthy individuals more than ever before.

Both substances have medical origins: Ritalin, or methylphenidate, for attention deficit-hyperactivity disorder (ADHD); modafinil for narcolepsy. By and large the validity of their therapeutic uses is uncontested – most recently for those who suffer from diseases such as depression and Alzheimer’s, where alertness and memory function are affected. But even in a medical context, neurocognitive enhancement can be ethical muddy water. There have been waves of unrest about the fact that in the US three million children are prescribed drugs to help them focus – a figure which has increased twentyfold in the last thirty years. The author Hanif Kureishi, writing in the New York Times, argues that Ritalin’s quick-fix focus is a form of psychological policing which fails to distinguish between creative and destructive forms of distraction – that a collective fear of wasting time has resulted in pathologizing children’s naturally limited attention spans.

Yet we are more preoccupied with whether ‘smart drugs’ should have a place in contexts other than the medical. We are faced with two lines of ethical inquiry: the actual and the potential. There might be current dangers associated with the use of existing cognitive-enhancing drugs, and there are also possible risks, some of them unforeseeable, involved in what such drugs may come to do – though admittedly we are in the baby stages of altering cognitive function, there is a need to anticipate the directions neuropharmacology is taking and to adapt accordingly to its discoveries.

Some hold that this latter line of inquiry is by far the most important. Professor Nick Bostrom, Director at the Future of Humanity Institute, says that his “main worry with the current generation of smart drugs is that they might not work. Their effect seems at best marginal. It is one thing to show that some group of subjects can be enhanced on some particular task in a lab experiment, and quite another to show that people in general would benefit from taking the drug chronically in real life.” But potential drug-users might not care about such nuances, and a student wanting to excel academically might dismiss Bostrom’s skepticism.

Alys, a literature student at St John’s College, reports that she did not feel “that discernibly different” when using modafinil. She did however complain that using the drug made her feel as though some other force had affected the way her sentences were formed and they didn’t therefore feel like her own. By contrast, James, a medical student with a burden of facts to memories, swears by modafinil and uses it frequently, including during his exams, mainly to boost his alertness on little sleep.

An aggregate report by nine leading neuroscientists in Nature magazine suggests that use of cognitive enhancing drugs “might include as many as 16% of the students on some campuses”, but many British institutions have between 0-1% of students using them. These striking disparities suggest that the use of cognitive-enhancing drugs is guided by social groups more than individual choice. If there is no culture for such drugs on campus they might well remain thoroughly peripheral, but once they are seen as acceptable or ‘normal’ they may move rapidly from the fringes towards the centre.

Even if, and it is indeed an if, current-generation neuropharmacology cannot increase everyday cognition it is only a matter of time before a drug or drug cocktail can. Should we view such an increase in cognition as akin to the advantage conferred by a cup of coffee, or should we scorn it like doping among athletes? Dr Sharon Morein-Zamir of the Department of Psychiatry at Cambridge University insists that we should aim for the golden middle: “Real life is not constructed in the way that sports contests are – we’re back to the grey area” when it comes to questions of policing: every new scenario demands a new response. The significance of cognitive-enhancing drugs differs according to whether they are used in lectures, during all-night essay crises or in exams themselves.

Morein-Zamir also points out that access to education is far from equal as it stands –  if we seek to complain about drugs we also have to consider whether parents paying for extra tutelage provides an unfair advantage. Or, indeed, paying for private schooling; reading to your children when they are young; having parents who place an emphasis on education. The list goes on and ‘fairness’ stops seeming a viable objective. It certainly appears as though wealth iniquity affects education in such a way as to make the hope of a level academic playing field obsolete. In which case, the minor difference made by analeptic drugs like these, which can be cheaper than an espresso shot, is really the least of our concerns. Maybe one day they could even help to bridge the educational chasm our class system has devised since they have a variable result dependent on how effectively one already functions: they are most effective for users who are performing poorly and have minimal effects for those at the top of their game. It is possible, although perhaps not desirable, to envision Ritalin-plus being distributed like free school meals, to help children from backgrounds which make them less likely to succeed academically.

But accepting the irresolvable nature of ethical concerns about fairness, it is still difficult to shake the nervousness that as psychostimulation becomes more commonplace, we risk losing certain things about life as we know it. Most of all what haunts this debate is a “mistrust of unearned rewards”. Our knowledge that there is no such thing as a free lunch is almost limbic: there must be a payoff somewhere down the line. It may be merely a hunch but there is a real and residual concern that what would be eroded is the connection between the person and their work, and – at the risk of sounding old-fashioned – the dignity of that relationship. These concerns are worth airing – but they might also, in places, be the melodramatic result of myopia. There is nothing to say that aided attentiveness derides a person’s capacity for self-control. Nor is there any suggestion that these drugs are confounding users’ ability to assimilate the work they do when using them. So why this nagging feeling? Maybe it’s just sentimental, like a premonition of a grandparent’s nostalgia for cursive handwriting, even in the knowledge of what technology can do. No doubt such fears are immaterial, probably misplaced, and we will in due course see how far neurocognitive enhancement can take us, since there are undoubtedly contexts in which these drugs could be hugely beneficial: for musicians performing at length from memory, for surgeons, or for military personnel.

Man’s impulse is and has always been to improve and innovate, to be harder, better, faster, stronger, and some of these drugs appear close to startling efficacy, with little to no downside – not even much of a sleep-debt. They are likely to become more powerful and perhaps so they should: as Bostrom says, “cognition is very important and its quality matters a lot, both to the individual and to society.”  So we are met with a contradiction: while pursuing ceaseless self-improvement, we seek to prize that which is inherent in human nature. Yet the more we improve ourselves with aids like these the more we move away from, in the words of Martha Farah, “what it means to be a person, to be healthy and whole, to do meaningful work, and to value human life in all its imperfection”.