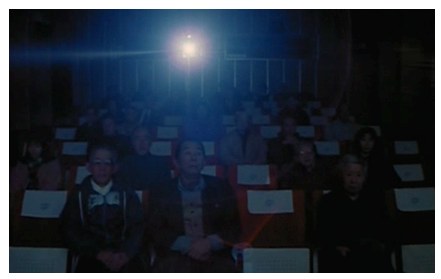 Neuroscientists at Berkeley, University of California, last year posted a video on YouTube, revealing the results of years of research. The video documented experiments in which they had scanned the brain activity of various subjects engaged in watching short films. They then endeavoured to translate this data into film by matching the subjects’ brain processes to a bank of thousands of hours of YouTube clips, providing a rough visual representation of brain activity. The attempt to capture on film the workings of the mind shows these Californian neuroscientists to have in common with modern cinema the desire to get inside people’s heads. Something about the moving picture is magic, as Mark Cousins, the renowned film critic, states in Channel Four’s The Story of Film; “At the end of the 1800s, a new art form flickered in to life. It looked like our dreams.”

Think of the famous moment in Fight Club, in which Brad Pitt’s character is revealed to have never existed at all, or the subtler instance in Shane Meadow’s Dead Man’s Shoes, in which the disabled brother turns out to have hung himself. Although for most viewers these moments are when any genuine artistic credibility evaporates, they demonstrate the use of a now-formulaic narrative tool; the Hollywood equivalent of waking us up from the story to say it was all a dream. Yet it points to something more important than narrative: it suggests that questioning and disturbing the reality of the cinematic world plays on the mind of any writer or director. Nevertheless, as Ben Wheatley, writer and director of last year’s cult British horror film Kill List, explains, one should be wary of the cliché formula this tends to entail: “you don’t want to end up with someone saying ‘oh, it was all a dream,’ which is the end game of a lot of those kinds of movies.”

Kill List, which travels from generic kitchen-sink realism to psychedelic terror, refuses to wake us up. The film’s claustrophobic, nauseating final half hour rattles to a shrieking climax – ritual killing, a mass of wicker-covered faces and naked bodies, the pained bewilderment of its bleary-eyed protagonist – and eventually, black out. It is a deeply uncomfortable film, reflecting Wheatley’s view that, “manipulating people into heightened states of hysteria is in the bones of cinema.” Like Dead Man’s Shoes and Fight Club, we have been lulled into believing a gritty realism that we slowly come to doubt. Wheatley is keen to emphasise the ambiguity of the film. For him, the most interesting question for the viewer is whether to take the plot literally. This is certainly possible, but, nevertheless, that doubt always remains. What if you take another reading of it? What if, he suggests, “at certain points in the film it just stops and becomes a hallucination of the main character? Or is it all a hallucination?” As Wheatley argues, the great mistake people make when watching his film is that they “get really angry because it doesn’t ever sum itself up”. For Wheatley, this is precisely the point, the very realism of the film: “I don’t think life sums itself up.” Thus, he explains, “the film in a way is a look at those realities, and in that tension between the reality of film and the reality of life.”

From Charlie Kaufman’s journey into Jim Carey’s memories in Eternal Sunshine of the Spotless Mind, to DiCaprio’s travels through layers of dream world in Chris Nolan’s Inception, films ‘set within the mind’ are increasingly popular. The tropes of the ‘is-this-all-a-dream?’ film are now formulaic, ever since The Matrix’s reality-doubting, red pill/blue pill ultimatum. As a result it becomes hard to define what precisely constitutes being ‘set in the mind’ – particularly given cinema’s natural tendency to align itself with real experience (just think of the point-of-view shot in everything from Being John Malkovich to Peep Show). In fact, the films that most explicitly put you in a dream world, like Inception and Vanilla Sky, are perhaps ultimately the least interesting, as they attempt to structure themselves around a philosophically fascinating reality-doubt as a kind of free-pass to artistic merit.

“The tropes of the ‘is-this-all-a-dream?’ film are now formulaic, ever since The Matrix’s reality-doubting, red pill/blue pill ultimatum.”

The red pill/blue pill ultimatum, and the simple dream-reality divide, is not something you will find   in Kill List or cult classics such as Videodrome and Terry Gilliam’s Brazil. These are films whose surreal narratives and landscapes are overpoweringly dream-like, in keeping with the nature of cinematic experience – which is, Wheatley suggests, “like a waking dream in itself”. Gaspar Noé’s hallucinogen-powered Enter the Void, is a perfect example of this. Enter the Void flies us over Tokyo from the perspective of a dead soul and plunges us into deep-sea dreamscapes before giving birth to itself from the baby’s point of view, sliding out of darkness into screaming light. Noé explains how he shot the childhood memory scenes to Twitch Film magazine: “I shot it all from just behind Oscar [the dead protagonist]’s head because when I think of my own past, or when I dream or when I go back to my room and think of this interview, I will reframe it and the camera will go back and I will put myself inside the frame. That’s how I experience memories; it’s from a different perspective, so I have Oscar as this void shadow inside the frame during those sequences.” Noé touches on something fundamental: that when we think of past experiences or dreams, we visualise them cinematically.

“Noé touches on something fundamental: that when we think of past experiences or dreams, we visualise them cinematically.”

Wheatley notes how he spent a long time trying to intensify the overall cinematic experience of Kill List, playing with “the idea of making your iris bigger and smaller”, by violently throwing the viewer between dark and bright spaces. In approaching the art of cinema in this way, he and Noé are attempting something genuinely ambitious: they are attempting to create cinematic experiences that acutely align themselves with the mind’s perceived experience and memory.

Film’s journey into the mind is, in many ways, in the very ‘bones of cinema’, as we organise our memories and dreams into cinematic worlds. Akira Kurosawa does exactly this in his triumph of magical realism, Dreams, a series of short films in which he reconstructs some of his own personal dreams. Similarly, Hirokazu Koreeda’s beautiful After Life sets itself halfway between life and death where heaven is an eternal memory chosen from one’s life. The workers at this halfway station create a film of this memory according to the subject’s description, and a screening of this film passes the purgatorial soul into an everlasting cinematic dream of the individual’s memory. These stunning Japanese films make explicit what Noé and Wheatley merely suggest: that there is something intrinsically cinematic about our memories and dreams, and that the very way we think and perceive the world around us echoes the movements of the camera lens.

So, while Berkeley’s adventurous neuroscientists move science further to capturing the actual flickering in our mind, cinema will continue its identical drive to show us the waking dream on the big screen, with directors like Kaufman, Wheatley and Noé coming ever closer to bridging the gap between cinematic reality and human experience.