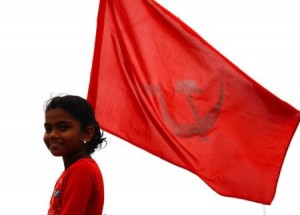 In Kerala’s misty, green, tea-planted hills the air is heavy. In the cities, citizens pride themselves on their driving, with one man telling me that Kerala has the safest roads in India (but crossing the road still feels like taking your life in your hands). Each day, hordes of young men go to the beaches to sell knick-knacks to sunburned western holiday-makers.

The state of Kerala lies along the coast at the southern tip of India. Despite its poverty, it is seen as a ‘model of development’. When I visited, away from the luxury hotels, souvenir shops and restaurants, there were blazing red flags, election posters, hammers and sickles painted on faded walls. Battered cars drove round with loudspeakers blaring out campaign slogans in Malayalam, the language of the state.

‘…The Marxists worked from within the communal divides, never challenging them, never appearing not to. They offered a cocktail revolution. A heady mix of Eastern Marxism and orthodox Hinduism, spiked with a shot of democracy.’

But there is no Stalinist government here. Despite being heavily influenced by Moscow in the forties and fifties, today Keralan communism is of a different kind. Thanks to land reforms made in the sixties and seventies far-left governments have had a lasting impact in the state, which has some of the highest human development indices in India.

Kerala was the first state in the world to democratically elect a communist government in 1957. Whereas the CPI had little success in other Indian states after independence, in Kerala it became a popular movement. So how did the Communists come into power?

According to Arundhati Roy ‘The real secret was that communism crept into Kerala insidiously. As a reformist movement that never overtly questioned the traditional values of a caste-ridden, extremely traditional community. The Marxists worked from within the communal divides, never challenging them, never appearing not to. They offered a cocktail revolution. A heady mix of Eastern Marxism and orthodox Hinduism, spiked with a shot of democracy.’

Kerala has a diverse population, with 56% Hindus, 25% Muslims and 19% Christians. Divides of religion and caste remain – it is mainly the poorer Muslim and Hindu voters who elect governments of the left. However it has not suffered from the same level of sectarian violence that has afflicted some other Indian states in the past few decades, in part perhaps because of its highly educated population. Amartya Sen: ‘the spread of education helps to overcome the traditional inequalities of caste, class, and gender, just as the removal of these inequalities contributes to the spread of education.’

Healthcare is also good, with a low infant mortality rate and a life expectancy of 74 years – higher than than of African-Americans living in the US, in spite of lower incomes and standards of living in Kerala.

Even before the policies of 20th century left-wing governments, Kerala has had a long history of promoting education, beginning with Christian missionaries in the 9th century and continuing through progressive monarchs in the 17th and 18th centuries, up until the development of schools during the British Period. Only the Indian central government prevented earlier Communist governments in Kerala from using this infrastructure to indoctrinate the young. However, under the influence of these, the literacy rate has increased from 47% in 1951 to almost 91% in 2001, giving Kerala the highest literacy rate in India. This has also contributed to high levels of politicization. In the damp calm of the tea plantations, workers strike and fast for implementation of the minimum wage. In the city, strikes often cause the roads to empty.

Rani Gouri Parvathi Bai of Travancore, a young queen in the 18th century, helped to spark Kerala’s culture of education: ‘the State should defray the entire cost of the education of its people in order that there might be no backwardness in the spread of enlightenment among them, that by diffusion of education they might become better subjects and public servants…’ This, along with a long tradition of recognition of Women’s property rights, has contributed to Kerala’s low fertility rate of 1.7, similar to that in Britain. Healthcare is also good, with a low infant mortality rate and a life expectancy of 74 years – higher than than of African-Americans living in the US, in spite of lower incomes and standards of living in Kerala.

Despite its many successes in human development, Kerala has had little success in achieving long-run economic growth. It has little manufacturing and relies greatly on the tourist industry; much of the income from tourism seeps away to western holiday companies and to other Indian states through central service taxes.

Because of this low growth, Kerala has always had a high number of unemployed. Educated youth are often forced to go abroad to look for work, and much of the states’ income is sent home by Keralans working abroad. There are also high levels of alcoholism and suicide in the state; Kerala has the highest per capita level of alcohol consumption in India. This could also be influenced by the state monopoly on alcohol – more than 40% of revenues for its annual budget come from alcohol,10 giving it little incentive to decrease alcohol consumption.

However, according to recent figures, unemployment has dropped from 19.1% in 2003 to 9.4% in 2007,11 fuelled by growth in the private sector and self-employment. Liberalization has created jobs for the workers educated by communism.

An old story says that Kerala was reclaimed from the sea by the Gods. When a warrior prayed for a peaceful place to repent, and the gods granted his wish, he threw his axe out into the waves. The sea fell back to the point where the axe had fallen, leaving a new stretch of land, God’s own country, Kerala. Today the people who live on this stretch of land have gained much from the influence of communism.