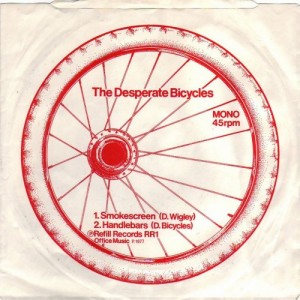 A mild Friday evening in March. Five men, with £153 in savings and borrowed money, rent a recording studio in desolate, decaying Dalston for three hours. They say they’re a band, but they haven’t rehearsed and they only own one instrument and one amplifier between them. The studio lends them some equipment, and three hours later they leave with two mono tracks on tape.

Five months later they’re walking into every small record shop in London with five hundred copies of a cheap-looking seven-inch record: ‘Smokescreen/Handlebars by The Desperate Bicycles’. No-one’s heard of them – or of ‘Refill Records’, the record label that’s apparently put out this peculiar little disc – but a couple of record store owners take pity and clear some space. A few interested customers shell out 70p or so and take it home. Word spreads. By the end of the year all five hundred copies are gone, and a second pressing of one thousand copies sells out in two weeks.

Smokescreen triggered a revolution. Picture a prehistoric landscape ruled by a few mighty beasts, and you’ve got a fairly accurate image of the UK music industry in the early 1970s. The dominance of major labels was threatened only by a few opportunistic smaller labels (Stiff, Virgin, Island), but even these were still decidedly businesses, run for profit by men in suits (albeit pot-smoking men in suits with a soft spot for krautrock). A new band looking for a way into the ‘biz’ had to chase a contract with one of the existing labels: there was no other way to get your tracks heard.

The Desperate Bicycles weren’t the first to challenge this status quo. Buzzcocks had self-funded and self-released their Spiral Scratch EP, the first British DIY record, at the beginning of 1977; but, just as the first copies of Smokescreen were being cautiously picked up off record store shelves, Buzzcocks signed to United Artists, and the sweethearts of self-sufficiency became labelmates with Chris Rea and Electric Light Orchestra. It looked very much like Spiral Scratch had been a calculated (and successful) manoeuvre to get picked up by a major label.

This meeting of scratchy guitars with radical politics – one group seizing control of the means of production – was inspirational, and soon young bands across the country were saving up their money to make their own ‘Xerox music’.

Not so for The DBs, as they soon became known. Smokescreen was a two-finger salute to the musical establishment, and A&R men who sneaked into the group’s few shambolic live performances were soon repelled. ‘I don’t want to sign. It’s just become a way of life doing it this way,’ said vocalist Danny Wigley in an interview for Common Knowledge magazine. There was no thought of a career in music at all, in fact, beyond the first single: ‘The aim,’ Wigley told another magazine called V-Sign, ‘was to see if it was possible to make a single, cheaply and without record company backing – and that we have achieved.’

Nevertheless, there followed a career (of sorts). The profits from Smokescreen went into a second single, The Medium Was Tedium, which proclaimed the DIY gospel even more strongly: the sleeve detailed the recording process, adding that the band would ‘really like to know why you haven’t made your single yet’, and the potent slogan which had closed Smokescreen became a chorus: ‘It was easy, it was cheap – go and do it!’. DIY had an anthem, and further releases extended the manifesto: ‘cut it, press it, distribute it – Xerox music’s here at last!’ This was inhibited iconoclasm: ‘You don’t need skill, just the interest – you don’t need skill, just the desire – the interest and desire to do what you believe in.’

This meeting of scratchy guitars with radical politics – one group seizing control of the means of production – was inspirational, and soon young bands across the country were saving up their money to make their own ‘Xerox music’. Dan Miller, founder of Mute Records and an early DIYsciple, read an early interview and put out a record without having even listened to The DBs’ music. A wave of bands followed suit, with Scritti Politti going one step further by itemising the cost of production on the sleeve for their debut single (‘Recording £98, Mastering £40, Pressing £369.36…’). The paradigms of music production had been shaken. The cult of DIY was born.

We’re almost exactly thirty-five years on from the first Desperate Bicycles session, and nowadays if you’re starting a band the first thing you need is a laptop. Facebook, Soundcloud, YouTube, Bandcamp, MySpace – there’s a brave new world of spondaically-named internet services linking music producers to music consumers, and offering the potential to cut out the record label middleman altogether. There’s no need to press records or even to burn CDs; tracks can be recorded, uploaded, and sold from home without a record company ever coming near them. In fact, we’re living through another revolution in music distribution. The DIY business model has set bands like Arctic Monkeys on a course from the local dive to Wembley, and has allowed Radiohead to strike out on their own by self-releasing their last two albums after the end of their major-label contract. There’s a new generation of DIYsciples.

What would the DIY originators of the 1970s think of this new order? Simon Reynolds, author of the definitive post-punk history book Rip It Up And Start Again, is unsure. ‘In some ways it is the extension of the original spirit, to the ultimate degree. But then again, with some of the exertion and effort removed, I think that something is lost, maybe. It certainly leads to an overload of music.’ Reynolds calls this phenomenon ‘DIYstopia’ – ‘something that was utopian in its original vision has gone out of control and is vaguely menacing’. Today, thanks to what Reynolds calls ‘the enablers’ – software instruments, production programmes, free web services – it’s become so easy to introduce the world to your music that the world has stopped listening. e-DIY has led to a strange state of affairs, something like a festival with a thousand bands on stage and ten people in the audience.

“There’s a lot of totally indulgent, unfocused experimental music being made today.”

Not that this hasn’t happened before. In the late 1970s and 1980s DIY culture started approaching a critical mass: ‘with cassettes and small run mail order vinyl,’ Reynolds explains, ‘the quality control went out of the window.’ For every pioneer there was an imitator; for every Desperate Bicycles, a Some Of My Best Friends Are Canadians. Nonetheless the sheer physical and logistical difficulty (not to mention the financial risk) of saving up or borrowing the money, recording the tracks painstakingly onto tape, pressing the discs or making the cassettes, and getting them into shops – let alone making sure people bought them – imposed some limitations. Now that computers have minimised those difficulties, the music market has become saturated. Welcome to DIYstopia.

Curiously, in this overcrowded musical landscape, record companies have become vital once more. e-DIY means a band can easily make its music available, but to make it widely desirable – to have one band stand out from the millions of other groups pulling the same moves – often takes the resources of a record label. And the mainstream approach has its advantages, Reynolds says: ‘When you have a whole team of specialist professionals – recording engineer, producer, sometimes sessions musicians, sometimes arrangers – then you can get some wonderfully recorded and well thought out records. DIY musicians can still get great results but it is much harder I think, even with today’s technology… there’s a lot of totally indulgent, unfocused experimental music being made today.’

Sifting through the digital stream can turn up gems, of course, and if you don’t fancy braving it out there alone there are hundreds of blogs and websites to guide you through DIYstopia – although the problem, again, is choosing who to trust. Attracting the attention of bloggers has become crucial to any band looking for the resources that a label (whether major or independent) can offer. ‘If you can get the attention of a blog that has a reputation, then you have a chance of getting an audience,’ advises Reynolds. ‘But in that sense things aren’t really any different from the days of print fanzines, or unknown bands sending their tape to journalists at music papers. You hope to snag their attention with the cover letter, or your artwork, or your manifesto.’ Like most upheavals, it appears, the DIY revolution has come full circle