“So beautiful as to be almost abstract.”

Cockfighting has been illegal in England since 1845, but the practice continues to flourish within the law in many parts of the world, including the coastal Peruvian village of Nepena. Organisers of cockfights in Britain can incur prison sentences and fines, but champion cock breeders in Nepena win prize money and prestige.

Far from being an underground operation, Nepena’s cockpit is situated near the centre of town in an arena built to accommodate several hundred spectators. The 6 August sees the semi-final tournament of an annual summer contest involving nearly a hundred cocks from Nepena and the surrounding areas. The event itself is merely the culmination of a process that consumes the better part of the year. It all begins when the breeders discern which of their cocks are most willing to fight by taunting the caged birds and observing their reactions. After selecting the most aggressive cocks from their coops, the owners embark on a training period of at least six months. They stage practice competitions, in which the roosters wear gloves instead of metal blades on their legs, while otherwise pampering them and feeding them well. The contest furnishes the community with endless fuel for conversation— speculating, strategising, bragging. The evening before the event, the men in the bar show off photos of their roosters on mobile phones. 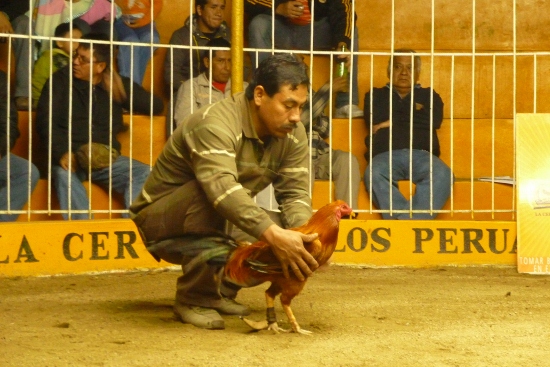 More than an hour before the first cocks don their spurs, spectators begin to filter into the arena, paying an entrance fee of ten soles (about two pounds) to take advantage of the festive atmosphere. Peppy music is played, and drinks and snacks— including chicken— are sold. Families congregate in the stands, the children running up and down the bleachers and the men drinking beer. The women wear high heels and tight jeans.

A five-year-old child determines the order in which the cocks will fight by collecting marked bits of paper from the ground of the cockpit. In the first round, the commissioner reads into a microphone, Jose Fernandez from Chimbote will compete against Ignacio Garcia from Nepena.

Jose and Ignacio carry their cocks into the ring and the commissioner attaches metal blades to the birds’ legs. Jose and Ignacio hold their roosters up to each other as though making an introduction; the birds lean out of their owners’ arms to peck at each other.

“50 soles for Ignacio, anyone against? Anyone against?” calls a stout middle-aged man marching up and down the bleachers. He finds someone willing to bet against him, and others follow suit. When the betting ends, Jose and Ignacio set their roosters in the ring and retreat into the stands. The two birds stare at each other for a moment, then, almost simultaneously, they fly at each other, biting, scratching and stabbing.

What is the proper etiquette for spectators at a cockfight? I anticipate it might it be like watching a graphic scene at a movie theatre, with everyone staring straight ahead and awkwardly avoiding eye contact. I am wrong. The crowd is not only watching the match intently, but is actively participating. Crowd members respond audibly to the action, gasping during particularly violent bouts and making clucking noises to provoke cocks that are reluctant to fight.

After a few bouts, Jose’s rooster lies immobile on the ground. The commissioner rings his bell over the injured bird, signalling its defeat. The crowd cheers; individuals pay off their bets. Blood drips from Jose’s wounded bird as he carries it away, leaving a red trail on the bleachers. Upon exiting the ring, Jose wrings his rooster’s neck, killing it instantly. A local man informs me that the cock will be soaked in cold water tonight to cool its spirit before it is cooked tomorrow. Gamecocks are valued for their taste as well as their earning potential; because of the special diet they have eaten and the care they have received, he assures me, they are far tastier than the average chicken.

It is well past midnight when the last of some two-dozen rounds finally draws to a close. Much of the audience proceeds to the discoteca, where they rehash the evening’s events over electronic music and more drinks.

My attempts to probe Nepenan cockfighting enthusiasts about the morality of their favourite pastime elicit little more than laughter. “Chickens are objects,” insists Manuel Gonzalez. He steers the conversation back to the topic of the prize money— 100,000 soles (about 23,000 pounds) for the grand champion. The average annual income per capita in Peru is about 27,000 soles, and it is much less in the small town of Nepena.