One of three schoolgirls who left east London in 2015 to join the Islamic State group says she has no regrets, but wants to return to the UK in order to have her child. There’s been a lot more coverage of British men leaving to join ISIS over the last few years, and I wonder whether more research into the decision of women to become ‘jihadi brides’ might tell us something prescient. Have they been groomed by extremist groups? And, in this sense, are they victims of sexual predation? From a legal perspective, Shamima was under 18 when she left, which gives the government responsibility for her best interests. One charge she might face is that of ‘encouraging terrorism’ which, when the possibility of sexual grooming is considered, seems almost ridiculous. – Leela

Karl Lagerfled, the director of Chanel and Fendi has died. He once said: “If you throw money out of the window, throw it out with joy. Don’t say, ‘One shouldn’t do that’ – that is bourgeois.” Thanks, Karl. But this has all got me (and the Daily Mail) wondering, has this made his cat, Choupette, the richest in the world?

How do you pronounce ‘scone’? Is it a settee or a sofa? Plimsolls or daps? Tag or tig? Dialects say so much about where we come from and how it influences our speech, and this quiz by the New York Times has yielded impressively accurate results amongst some of the The Isis team members.  – Beth

This week, thousands of school children all over the UK went on strike to protest the government’s inactivity on climate change. They have been lauded for taking action into their own hands, and their signs reflected their commitment. Some of my personal favourites were “We can’t drink oil/ We can’t breathe money”, “Think or Swim” and “There is No Planet B”. – Zehra

The Vande Bharat Express has broken down on its first trip when brakes in the carriage reportedly jammed. It’s a bit embarrassing but highlights a really important and fundamental lesson: we always carry on. There’s also rumours that a video taken of the train was sped up to make it look faster. Reee!!!!!! – Leela 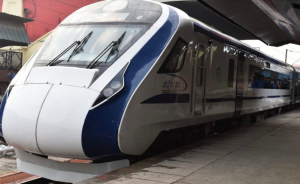 The non-profit technology company OpenAI, backed by Elon Musk, has announced the creation of a new AI fake text generator called GPT2, but will not release its research publicly yet because of the potential danger of its misuse. This AI system is designed to create news stories and fiction based on other texts from the Internet in such a convincing way that one cannot tell it apart from its human-written source. It can also translate and summarise, which is another development from previous AIs of this kind. The problem is that in experiments it has already invented its own pseudo-facts for news pieces and has been trained to respond to texts in platforms like Reddit, so there are fears that it may be used to propagate fake news or echo bigotry from the dark side of the web. – Jorge

A group of Labour MPs have jumped ship in an attempt to create a new centrist party. You probably won’t have heard of many of the seven politicians, barring perhaps arch-Blairite Chuka Umunna, who launched a botched campaign for Labour leadership back in 2015. The new ‘Independent Group’ released a pretty bland statement – have a read for yourself. Is this what the British left have been waiting for? As inequality, poverty and misery crescendo after years of austerity, and the UK faces an increasingly baffling and disastrous-looking exit from the EU, dividing the left and reviving New Labour might not be a great idea. One of their members has already had to apologise for using racist language in a TV interview today. – Jade

Following a fan’s request, both Olivia Colman and Rachel Weisz spoke to camera on the Golden Globes red carpet and the result went viral. A quick bit of editing and a tweet later, we are left with this heartwarming affirmation of allyship not dissimilar from Jennifer Lawrence’s much memed FCKH8 poster. There is so much to unpick: Olivia Colman’s excitement, Rachel Weisz’ steady and professional nod. Queer twitter rejoices. “Gay Rights”. – Antonio

everyone say thank you rachel weisz and olivia colman pic.twitter.com/Cwu4cXW1Ad