And so, on the eleventh hour of the eleventh day of the eleventh month, the guns finally fell silent, bringing to an end the most destructive war in Europe’s history. One hundred years on, there are many ways to look back on 11 November 1918. For students, perhaps none is more sobering than a glance through the wartime copies of The ISIS. Every week of the conflict, the magazine, incorporated with its fellow Oxford publication Varsity, printed the ever-growing list of names of Oxford University members killed in action. (By October 1916, when today’s archives come to an abrupt end, the number dead stood at over 1,400.)

In between, The ISIS‘s pages were filled with poems, personal reflections, and a good deal of light-hearted debate. Perhaps most striking is how the writing shifts from an early patriotic fervour to a more reflective, pondering, and altogether darker tone. Drawing on a selection of poems and articles that appeared in The ISIS in the first two years of the conflict, it’s possible to glimpse into the minds of students – in Oxford and the trenches – as Europe tore itself apart around them. They tell stories of the pain of loss and the promise of peace – and of a wish to build a new world from the ashes of war. As one wartime editorial put it: ‘One hopes, then, that the war will prove to be the gateway to the age of reality.’

To the volunteers of Oxford

You bore the long monotonies
While Peace rehearsed the role of War ;
Then gathered in your companies
From Merton Field to fair Lorraine.

Amid the warm gray fumes that hide
The withering battles of the plans,
You chant the Marseillaise beside
The watersmeet of Sambre and Meuse.

And we, whose hands shall bear no palm,—
Forgive us, brothers! Even we
Shall hear beyond the cloisters’ calm
The echoing forests of the Vosges.

So in the watches of the night
Before the disenchanting dawn,
Seem you to see the misty light
Of Merton Fields from fair Lorraine? 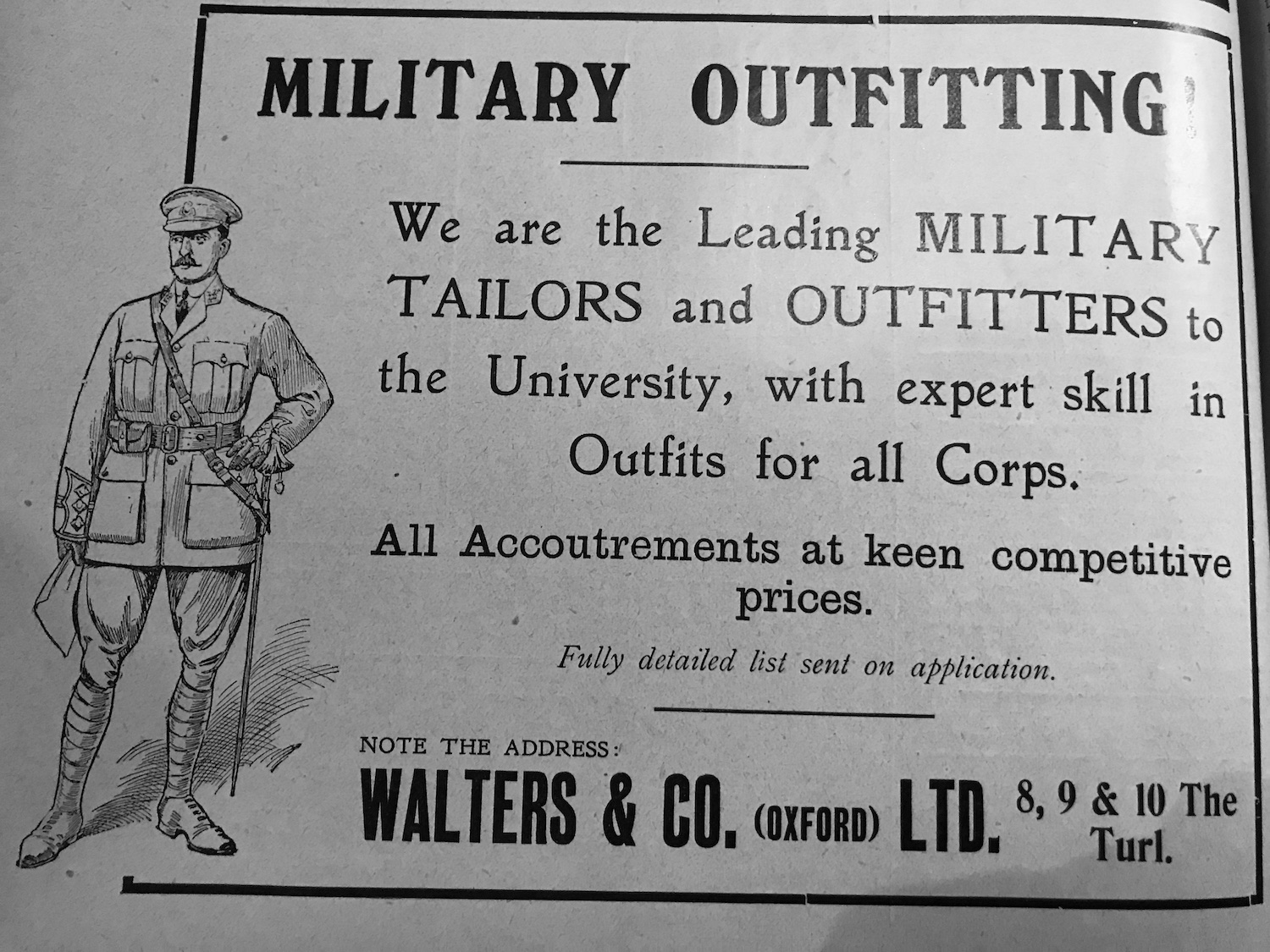 Advert for military tailoring in The ISIS, October 1914.

When daylight’s smiles first greet
Oxford’s towers still dark with night,
Comes a squad of marching feet
And an echo, ‘right–left–right,’
And it’s Godley’s army coming, getting ready for
the fight.

And the Sanscrit scholars howl
‘Tipperary’ down the High,
Scouts and Fellows, cheek by jowl,
Slope their arms and pass us by.
When we beat the Germans, Godley’s
Army’ll be the reason why.

On their ranks are Rhyme and Reason,
And they’ve got a hand-book each,
And the O.C. speaks in season
(Thankful for his power of speech)
To the hapless don who finds it
Harder work to lean than teach.

Have the Zeppelin threats dismayed us?
Antwerp’s fallen; do we fear?
If the Germans could invade us,
What would be the danger here?
Godley’s army will be waiting
When the German hordes appear. 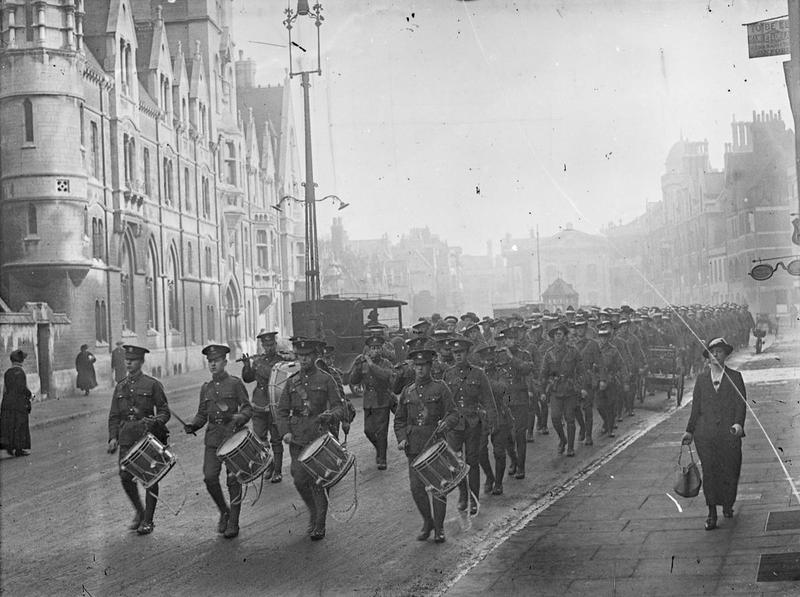 Cadets headed by a band marching through Broad Street, Oxford, during the first world war.

Imagine a country very much like England, less flat than the part round Oxford. At the place I am speaking of particularly there is a valley between two small hills… On one of the hills are the British trenches, on the other the German. Not having – as yet – been into the German ones, I can only describe the former. It is a long trench holding about 300 men, very narrow (two men can just pass with difficulty), about three feet deep, with a parapet of 18 inches… On the parapet lay men’s rifles, loaded and already cocked. In each traverse there is one man in a more or less standing position, who puts his head above the parapet from time to time to see if anything is going on. The rest of the men lie about very much like sardines in a tin…

This is a rough picture of the surroundings. The life is either monotonous or damnable, generally both. It consists chiefly of lying on rain-soaked ground, or sitting on an ammunition box watching shells burst. Whether one wants to or not, the result is that one calculates what are the possibilities of a shell dropping on one. The conclusion is generally the same – it is bound to occur within the next five minutes… The shells are generally of the ‘Jack Johnson’ type – a high explosive which makes a large hole in the ground, and emits a column of thick black smoke. Sometimes, of course, there is a rest while shells are planted further away. Again their comes an explosion from the rear, followed by a whizz overhead, and another explosion, this time away in front, and then there comes that whisper Kipling speaks of: ‘From the lips which haven’t drink all day, the guns, thank Gawd, the guns!’

An old sand-bag is thrown over his head, and he is bundled out at the back of the trench to wait for the stretcher-bearers to come up under the cover of darkness

The danger of lifting one’s head above the parapet comes from snipers. These are the few good shots in the German army, and very good they are, too. I will end up with a tragedy which might called ‘The Observer and the Sniper’. An old soldier with three months’ beard is acting as ‘observer’, and is showing a supreme indifference to the many attempts on his life. He is placidly dozing when he is aroused by a bullet whizzing past his ear. ‘Now where the ‘ell is that bloke,’ he says, getting hold of his rifle. ‘Don’t stick your head up too high, you fool,’ someone remarks. ‘Them b–––– rotten shots; you go to ‘ell,’ the observer retorts. Then: ‘I see him.’ ‘Where?’ ‘Just by that bloke entrenching himself…’ He takes a shot. ‘Got ‘im? No, the devil’s ducked.’ But before the words are out of his mouth a bullet catches him between the eyes, turns over, and splits his skull. His cap flies into the air, and he drops stone dead. The sniper had won.

This is a true story, and only one of the many little incidents which take place, and it is a typical one. It may seem ordinary to you, but if you had just been borrowing the man’s tin of ‘bully’, and you had been listening to his opinions of the Germans, you would feel differently. An old sand-bag is thrown over his head, and he is bundled out at the back of the trench to wait for the stretcher-bearers to come up under the cover of darkness.

To an absent friend

When will you come and walk with me,
And go by old forgotten ways
Down the long paths of memory?

Now Autumn sings sad threnody,
And over are the summer days,
And all my joy is gone from me.

Nothing abides but memory:
How shall I threat its winding maze
Except, dear heart, you come with me? 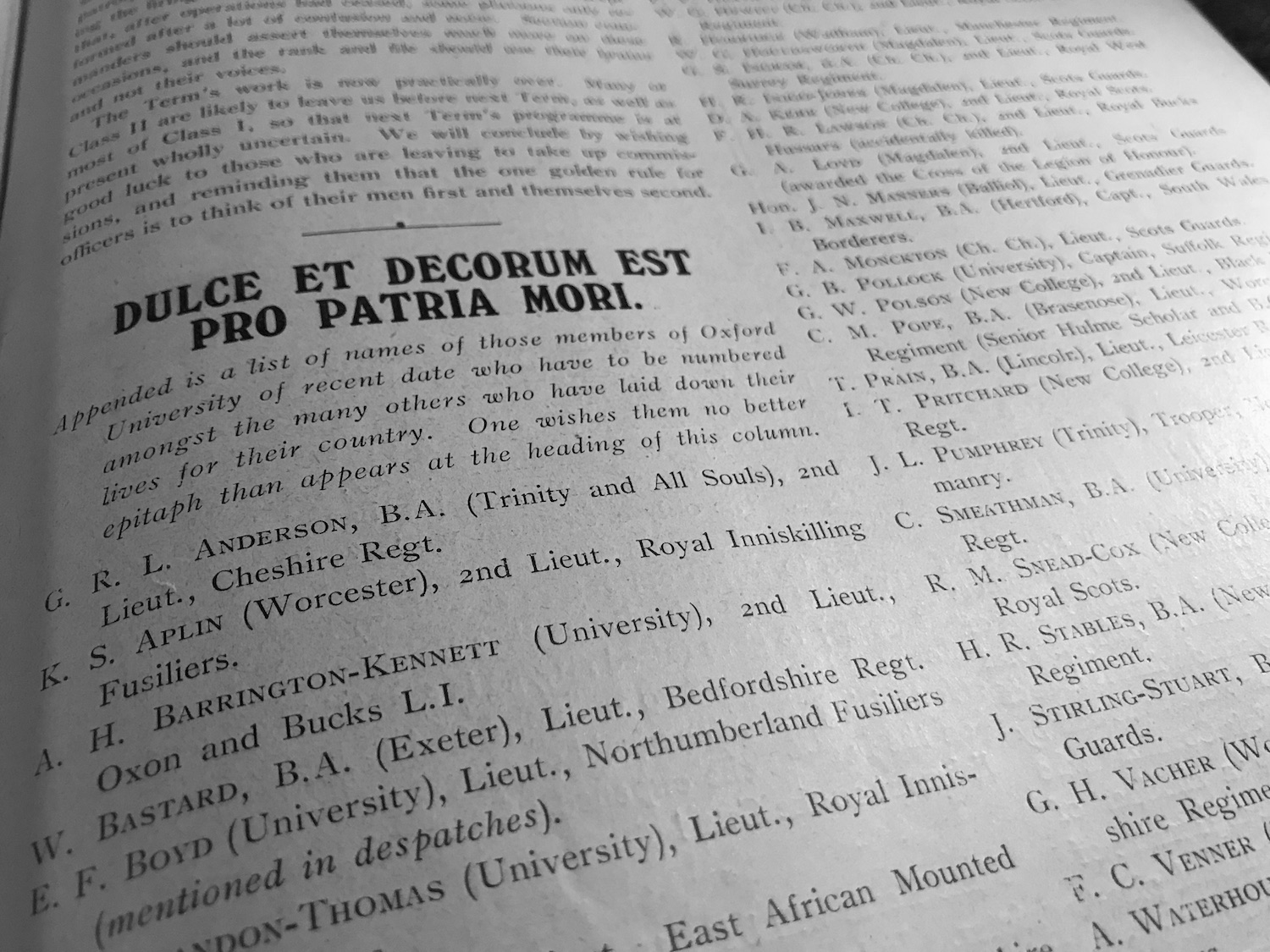 To my dead friend

Last night I read the lines you wrote,
The promise of a future bright
You would have weav’d with your clear note
Of talent; and I felt delight

That through your words I too may know
The hidden secret of your art,
Which soothes my soul with music low,
Of painted words, bidding depart

All thoughts of sadness, leaving but
An echo of the former pain, that wrought
Havoc within me, as I shut
The door of friendship – which we sought

To keep long open in our sight –
When you pass’d on to higher work
And fuller life, beyond the light
Of earth-bound mortals in the mirk

Of desolation. So to me
Gone words, ‘deathless in eloquence,’
My pride and pleasure e’er will be
Till, wand’ring over, I go hence!

‘Tis moonlight: I have flung the window wide,
That the sweet breath of night may enter i,
And all the voices of the world outside.
Faint from the north, the city’s ceaseless din:

The snowy pear tree whispering its tale
To the night breeze: an engine’s shriek, long drawn,
And the sounds of shunting: and the nightingale
Singing his heart to me across the lawn.

Sing on, sweet singer! to a heaven of dreams
On waves of music bear me far away:
Float my dim soul along its mystic streams.
Sing on, Sing on: too soon will come the day.

Now all the fields are bathed in silvery light,
On all the house the hush of slumber lies.
Great father, Giver of this lovely night,
Give me Thy peace before I close mine eyes.

L. A. G. S., Sidcup, April 1916. (Sidcup in Kent was the location of Queen Mary Hospital, the first of its kind to offer soldiers with facial injuries reconstructive plastic surgery.)