When she embroidered a denim jacket with the words ‘Not Your Habibti’ (Not Your Darling), Yasmeen Mjalli thought of it as personal message of feminist defiance. But when she posted a photo of herself wearing it in Palestine on International Women’s day, her comments and DMs were flooded with girls asking where they could get one like it.

“I realised there was something here that I could act upon,” Mjalli, a 21-year-old Palestinian-American student, tells me. “I remember painting jackets out of the living room. Every jacket took me four, maybe five hours to paint, and I painted probably 50 before I was like okay, this is way too much, let’s get this somewhere official.” And so Mjalli’s brand, Babyfist Denim, was born: “designed to start a conversation about Women’s Rights worldwide.” The jackets are hand-embroidered in a co-op of 25 women across various villages in the West Bank, before they are sold to buyers around the world.

Mjalli was raised in North Carolina, but spent three months in Ramallah every summer. As a child, she was unaware of the political situation in the West Bank. “I knew that there was this big scary occupying power that we were all terrified of, I knew that there was this awful thing that had happened to us 70 years ago, and I knew we were all hurt and angry—but I didn’t understand why.” 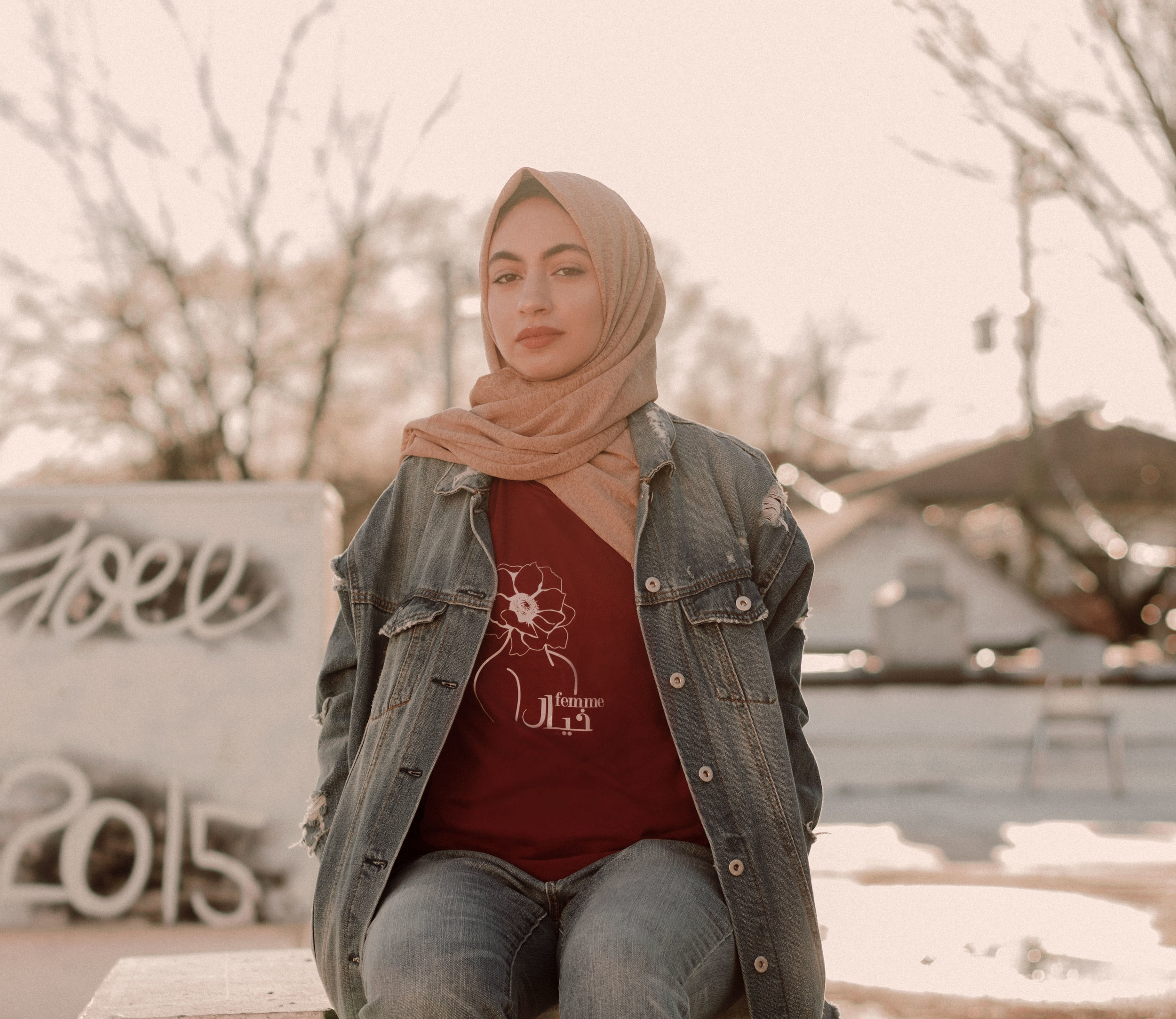 Then she moved to Ramallah when she graduated college. Her desire for activism, she tells me, stemmed in part from her need to feel a sense of belonging. “I was struggling with this idea that I didn’t know who I was—when I was raised in the US I was always made to feel distinct from the rest of the people growing up who had blonde hair and blue eyes, and didn’t have this weird Arab background that was demonised in the media. Then I came to Palestine, and it’s sort of the same thing—they [Palestinians] were like ‘okay, but where are you really from?’”

Despite her American passport, Mjalli is a Palestinian citizen, which means she is unable to travel into Israel or fly to Tel Aviv. She has become hyper-aware of these restrictions and limitations placed upon her due to her Palestinian nationality—but neither does she feel entirely at home in Palestine: “I look a little different, I sound a little different, and people here definitely make me very aware that I come from a different background. So I found myself in this sort of identity crisis, thinking, okay, I’m not really at home here, so who the hell am I, and why am I being marginalised for this?” Her sense of being an outsider led her to form Babyfist, a community where ‘it was okay to be different, it was in fact celebrated. You can’t deviate from the norm—there is no norm.’

Since starting out as an activist, Mjalli has faced criticism from Palestinians who feel that her work should not be a priority under occupation. “It’s somehow as if, if I draw attention to these issues of social injustice, I’m somehow undermining the occupation. Many Palestinians’   is to illustrate to the world that we are occupied, and so they find it frustrating when someone comes along and draws attention to an issue that isn’t occupation.

“But my whole argument is that we should be able to work on ourselves socially, economically, legally, without having it somehow take away from our right to be free, and our right to be recognised as humans. When we refuse to work on our social issues, our legal issues, that almost gives fuel to the stereotype that the western media has given us.”

Occupation also has a physical impact on Mjalli’s business. The T-shirts are now made in the West Bank, while the jackets are made in Gaza—which causes difficulties, especially as the Palestinian postal system is dependent on Israel and its holidays. She describes how just the other day, she shipped a huge order for a group of female students in Jordan, only to find that only half of the clothes arrived, a month later. She sighs: “It’s just always so dependent—so unstable.”

On one October day last year, Mjalli took a typewriter and sat by the side of a road, asking women to share their stories of sexual harassment while she wrote them down. The stories she heard began her ‘Typewriter Project’—a collection of anonymous women’s stories of harassment. Some are displayed on the Babyfist website:

“I was so excited to visit Bethlehem on Christmas Eve. I expected it to be a memorable and special day filled with community and joy. What I didn’t expect was to feel a man’s hand reach through my legs and onto my vagina and he proceeded to grope me… I will not be silenced any longer.”

“I was walking along a dirt road and no one else was around. A man approached me and said ‘hello’. He shook my hand and that was perfectly fine and friendly. Then he poked my breast and made a hand gesture implying sexual intercourse. I was so surprised that the only thing I could say was ‘NO!’ and I left. I walked away as fast as I could. I had never felt so scared in my life.”

Coming from a “very small town” in North Carolina, Mjalli was subjected to little street harassment growing up—this changed when she moved to Ramallah. But, she tells me emphatically, she does not think that sexual harassment is something specific to Palestinian or Arab culture—as the Typewriter Project, which now records stories from women all over the world—attempts to show. She is currently undertaking a typewriter tour of Italy and the US, travelling from university to university and collecting stories of harassment and assault from students.

Yasmeen Mjalli types out women’s stories of sexual harassment in an effort to highlight the problem across the world. Image: Yasmeen Mjalli.

“Honestly, you could copy and paste every story from the Palestinian side. I mean, if I gave you all the letters I’ve collected from the US and Italy and Palestine, and asked you to pin them up on a map, you wouldn’t be able to,” she says. “They transcend nationality, and local borders, and race, and religion—they’re so universal.”

For her latest exhibition, ‘Buried and Freed’, hundreds of letters are displayed in a child’s coffin, detailing stories of sexual harassment, which viewers are invited to pull out and read. Mjalli says she conceived this idea when she read about a pre-Islamic tradition where tribes would bury alive female infants as soon as they were born, to prevent any possibility of them bringing future dishonour and shame on their family. When the Qur’an was later adopted, it condemned the practice and decreed that the infants would be given a space before God to tell what happened to them—and only at this point would they be given the divine right to enter heaven.

For Mjalli, this was a powerful instance of the female voice telling her story, and in telling it, also finding catharsis and relief. “I feel that in today’s society, even though that practice is dead it still metaphorically happens—there are there are societal constructs and norms where female voices are buried. For me one of the biggest and most critical aspects of my work is to encourage women to use their voices—because not only does that catalyse collective change, but it also catalyses individual healing.”

“And so I wanted to create this coffin through which all letters were featured and participants were welcomed to pull them out to read them. And by pulling them out, they are mimicking this resurrection of the child, and her voice, and by giving that child the honour acknowledging her story, they are helping her further down that road of healing.” 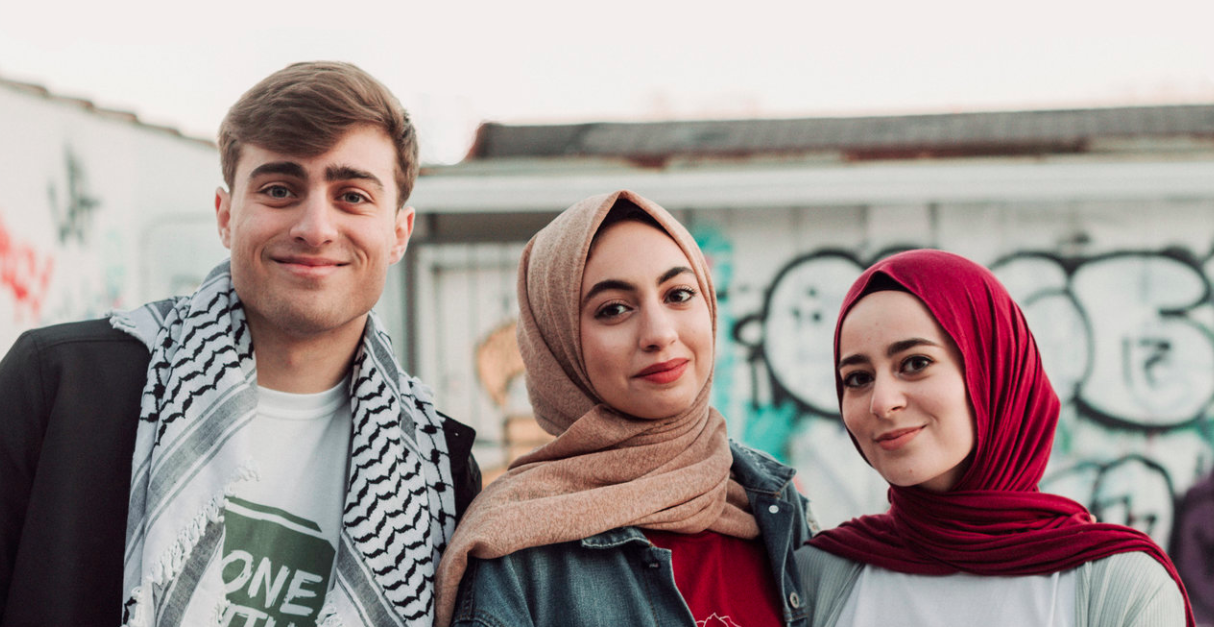 Mjalli will return to America next year to study for her masters’ degree in Women’s Studies at Duke University, North Carolina. She is “heartbroken” about leaving Palestine. “In the United States,” she tells me, “it’s such a bubble, you’re so removed from the tragic reality of the rest of the world. Most people’s concerns do not extend beyond their own lives here, and I was very much in that same bubble.”

I wonder, though, if Mjalli’s western upbringing ever hinders her ability to relate to the Palestinian-born women for whom she advocates. “It can be a bit difficult,” she admits, “because sometimes I feel torn between two very different cultures and ideologies. I’m always checking myself to make sure I’m not bringing one ideology from one side onto the other in a way that maintains a hierarchical structure of power. My goal is to foster conversations about what we can build in the liminal space of identity, free of post-colonial white feminism and of traditional Muslim patriarchy.”

Does her American identity change how she sees her responsibility? “Yes and no,” she says. “I was raised by two conservative Muslim parents hailing from a small village in the north of Palestine. If I feel distanced from other Palestinian women, it’s only because my struggle was particularly situated in the United States where I had to try and defend a culture that was simultaneously infringing on my own views.”

Although misogyny finds expression in different ways around the world,  Mjalli’s mission is to help all women learn to speak up and acknowledge what they have undergone. “I ask women to share their stories with me,” she says, “because if you don’t let yourself feel the pain, you won’t heal, or even worse: you will forget how to love.”