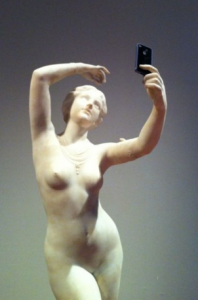 Sally: Ok, before you start, you might want to work on that title. I just feel like the ‘selfie as empowering feminist tool’ has been done to death —

Polly: — with that picture of the statue taking a selfie, yeah. Although that’s not exactly what the piece is about… Can I just read you the start and you can stop me with any thoughts you have?

Polly: Don’t be too harsh. (clears throat) “People in their twenties are the objects of a cultural fascination. Maybe it’s a recent development, or maybe I’m only noticing now that I’ve entered this fetishized decade of existence. Where cultural obsession has met a new generation of women who speak their own truth, we have seen a swell in the telling of a certain kind of female story. Whether in online journalism, films, music, poetry, fiction or non-fiction, the story recurs, in a slightly different guise each time. It’s a story about a twenty-something Western woman. Sometimes she’s older, but she’s always exemplifying that twenty-something drift. She lives in a big city. She’s working out who she is and the person she wants to be, trying on different jumpsuits, personalities, haircuts and jobs until she finds ones that will stick. It’s her story of weathering the uncertainty, the job rejections, the loneliness, the absurdities and tragedies of modern dating, with a healthy sense of her own ridiculousness and a similarly ‘tragic’—”

Sally: So you’re basically talking about Lena Dunham and Girls?

Polly: Is it that obvious? I mean it describes Brooklyn-centred films like Frances Ha too. I want to get at the much broader trend I’ve been noticing of culture that depicts twenty-something women muddling through early adulthood.

Sally: Oh ok, I see. You could also mention that BBC drama, Fleabag, that was on a few months ago? It fits the trend even though she’s slightly older and not really in the same artsy bubble.

Polly: That’s a really good example of these female stories being grittier, and more honest, than slightly earlier depictions of twenty-something women. I’m hoping to make the point that these recent shows like Girls and Fleabag are much darker and written more genuinely for the female gaze than say, Gilmore Girls or Sex and the City.

Sally: That’s so true! Gilmore Girls is so wholesome and Sex and the City so glitzy that they’re just basically both just escapism.

Polly: “Whereas recent cultural representations of ‘millennial’ women come closer to the reality of undergoing this tumultuous period of self-definition in a very grim economic climate. I think it’s an important qualification of the fixation and glorification of our twenties with an acknowledgement of how fundamentally terrifying they are.”

Sally: And now more terrifying than ever! I’ll link you a study I read about how this decade of experience tends to be the one most marked by depression and anxiety.

Polly: “‘Adulting’ was narrowly beaten by ‘post-truth’ this year in the contest for the Oxford English Dictionary Word of the Year. Explaining its inclusion amongst the words that reflect the strangeness of 2016, the people of the OED note that ‘adulting’ is “associated especially with millennials, known for their ambivalent relationship with the trappings of adulthood”.

Sally: Such shade from the OED!

Polly: “As many a TED talk confirms, the road to responsible, respectable adulthood is both rockier and longer than it has been historically: we’re putting off marriage, kids, ‘settling down’, setting the twenties aside for self-discovery and the creation of ‘wild’ memories that will sustain them through adulthood. But the uncertainty is terrifying; the fun frenetic, the freedom tinged with a jittery anxiety. And this has given way to a revolution in the way women talk about their twenties, and a revival of art that was already describing young female experience in that way. These disparate stories of women weathering the stormy seas of early adulthood might be unashamedly inward-looking, but they help me find a strange kind of beauty in the muddle I’m living through. Isn’t that the purpose of art, to help us make sense of the lives we’re living? I need these funny, sensitive cultural depictions of twenty-eight year-old “not a real person yet” Frances Ha, or of struggling twenty-something stand-up Donna Stern, told unashamedly from and for a female gaze. These drifting women aren’t really ok, still figuring things out, but by the end of the films each is (*spoiler alert*) slightly more ok, slightly more at peace with the uncertainty. In this messy period of flux, where we’re still working out who we are and who we want to be, sometimes the only thing that gets me through the harder parts of it–the heartbreaks, the job rejections, the crippling fear of dying alone–is connecting to this sense that I’m experiencing it all, feeling all of the things, seeing the full spectrum of experience which life has to offer.”

Sally: Aah! Like when someone says to Hannah in Girls: “Look at you. You’ve had all these, like, boyfriends and jobs and moments and you’ve lived all this truth.”

Polly: Exactly. These stories are so incredibly comforting. They reflect our lived experiences, the conversations we’ve had while we sit in our underwear sharing a kebab at 3am. I don’t feel like I’ve ever seen my own truth reflected back at me more starkly.

Sally: I’m pretty sure that line from Girls is ironic, you know. They’re stoned in that scene.

Polly: You can trivialise it all you want, but I think that’s part of a wider cultural devaluation of young, female experience, and —

Sally: I thought your piece just said that our culture ‘fetishises’ the twenty-something experience?

Polly: Ok, fine. Our culture does fetishise youth, but I also think it tends to dismiss the concerns of women as ‘trivial’ and the women who articulate their experiences as ‘narcissistic’. This cultural trend of twenty-something women saying how it feels to be them, it’s feminism in action. It isn’t ‘narcissism’ to speak your experience of the world simply and clearly.

Sally: I don’t think it’s acceptable to quote Audre Lorde in defence of Girls, Polly. This is a cultural trend spanning everyone from Beyoncé to Fleabag, but so far you have been quite focused on a handful of white, kind-of lazy, fictional Brooklynites. I know that Beyoncé’s ‘Lemonade’ is firmly rooted in her own story, particularly the personal details of her marriage, but it also speaks so powerfully about what it means to be a black woman in America today. I’m not exactly sure that Hannah Horvath’s terrible decisions and the entitled, white-washed cast of Girls are what Hélène Cixous had in mind when she encouraged women to write their bodies, themselves, their truth. All of this slightly cliché ‘figuring it out’ stuff isn’t terribly radical. A muddled, half-arsed attempt at ‘adulting’ in an artistic milieu in New York is only open to a woman of a certain income bracket.

Polly: That’s fair. I should bring ‘Lemonade’ in. It’s testament to how powerful this kind of personal storytelling can be if it’s available to people of all ethnicities and backgrounds. These privileged white girls speak to me because I’m a privileged white girl, and I know they aren’t representative of every twenty-something woman’s reality, Sally. It’s not that these are not stories worth telling, we just need other women telling their stories as well.

Sally: But Polly, I don’t even think it’s just an issue of white, middle-class feminism – although that is closely bound up with it. It’s that a lot of these women — especially the characters of Lena Dunham’s Girls — are just fundamentally terrible people. It’s taken to its logical conclusion in Fleabag – maybe it took an even grittier British perspective to drive home that these are not figures to be idolised or lifestyles to be romanticised – the woman in Fleabag is not just a terrible person, but an absolute mess. Aestheticising some unhappy white women having bad sex and quirky, horrendous experiences while they drift around Brooklyn doesn’t necessarily make it meaningful.

Polly: How can honesty like this not be meaningful?

Sally: But are they leading meaningful lives? Life imitates art as much as art imitates life. Maybe there wouldn’t be such a strongly self-absorbed sense of being ‘happy, free, confused and lonely, at the same time’ if we didn’t have art telling us it’s that way. You look to this recent cultural outpouring for validation. Maybe it is comforting or validating for you to have your own experiences reflected back at you, but that is, definitionally, narcissism: looking in the mirror.

Polly: You know what, maybe it is narcissism. But women are just as entitled to be narcissists as men are, Sally. Haven’t generations of male writers and filmmakers indulged their own narcissism? The only challenge now is to ensure that all women, not just the white middle-class ones, are extended that same right to narcissism.

Sally: I think I’d rather not be a Medusa, then, Sally.