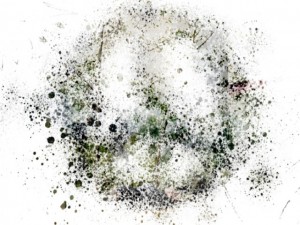 ‘It was in a city street. A baby sat, lolling against its mother’s shins, in a sunlit doorway. The child was dressed in knitted white; it was plump under its socks and gloves and small pullover.

Its head was gently covered with the same white wool. Only its face was uncovered. It stared out of its right eye. The left side of its face was made of rusty metal, a jagged line ran down the nose where metal and flesh joined. The left eye was a thick, empty circle. I knew that there had been some sort of explosion.’

That was a dream, and there was no anger in it. There was no need for anger, for there was nothing to be done, except pity. Dreams are supposed to blur and disappear, but the city and the street, the mother and the child are still clear-cut, and the rough surface of the corroding metal cheek is still tangible. Any pity that was given then is still as necessary, though the savaged child may seem a trivial figure among so many dead. It is easy to help this child, to show it compassion, and then to walk out of the front door proudly. It is difficult to make this child, its suffering and the responsibility for its mutilation and inevitable death, our own. Perhaps it is even harder to do all in our slight power to prevent the next death.

This is an atrocity, not a fairy story, for there is no villain and no hero in war. It is not worth going through hell for the promised Princess, she is cruel and old. It may be morbid to thumb endlessly through the horrors or war, but it would be unrealistic to forget that human bodies are deliberately maimed, blinded and torn to pieces like useless sheets of paper; that each death in war is a murder. As our allegiance to the human race is greater than our loyalty to any government, our duty is clear. We must refuse to kill, knowing that this decision does not wash us clean of responsibility or guilt. We cannot cut ourselves from the State at war, but we can refuse to inflict suffering deliberately.

The pacifist is one who has examined the obscene instrument of war and rejected it as both impractical and immoral. He cannot accept the conventional picture of Alexander, Julius Caesar and Napoleon Bonaparte as great men. To him the refusal to go to war is not a negative gesture, it is an assertion of humanity. Eugene V. Debs said at his trial: ‘I am opposed to war. I am perfectly willing on that account to be branded as a traitor… Years ago I recognised my kinship with all living beings, and I made up my mind that I was not one whit better that the meanest of earth. I said then, and I say now, that while there is a lower class, I am in it; while there is a criminal element, I am of it; while there is a soul in prison, I am not free.’ Those are the words of a man who had begun to love his neighbour and his enemy, who knew that the bad dream need not recur indefinitely. We may say that they are the words of a great man, for man is as great as his love.