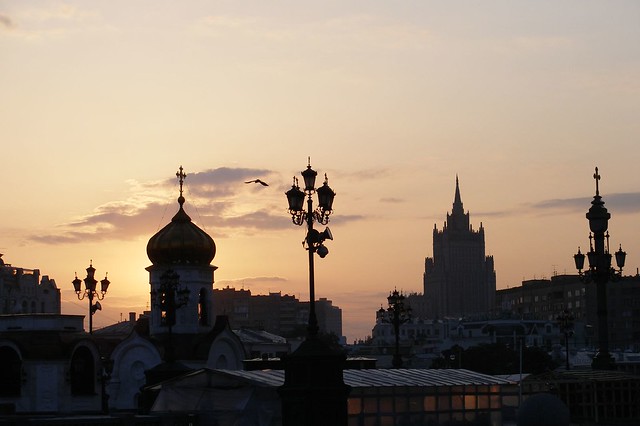 The last rays of daylight glint on the golden domes of the Kremlin, and glimmer in the champagne filled glasses on the roof terrace of the Ritz- Carlton hotel. Up here, the city’s wealthiest residents and guests guzzle bottle after bottle of brut and admire nightfall over Red Square.

Beyond the hotel doors and rows of neatly parked chauffer driven Mercedes-Benz, an elderly babushka crouches on the pavement, gazing imploringly into the faces of passing strangers hoping for spare rubles. On the metro, a man in a soldier’s uniform missing both of his legs drags himself through rows of passengers begging for change. These people, whose lives were cast aside with the fall of communism, have nothing left to their names.

Moscow is a city of extremes. The thirty-degree-heat summer plummets into a harsh, snowy winter, blocking the roads with snow drifts and rupturing the streets and pavements through the processes of freezing and defrosting. Luckily for those at the top of the Russian food chain, a sub class of underpaid migrant workers slave 24 hours a day, shovelling the snow and ripping up and replacing the ruined tarmac every year to keep the stream of luxury cars trickling into the congested capital from nearby dachas. For those at the very top, even the traffic is not a problem, as the busiest of Moscow’s boulevards can be closed at a moment’s notice to accommodate the whims of a travelling oligarch, at the expense of the thousands of residents who frequent the city’s bus service.

Outside every metro station small markets have emerged, selling city necessities. Local farmers provide fresh, and often live, produce, babushkas sell everything from kitchen implements to underwear for pennies, and you can pick up an almost perfect replica of the latest designer handbag for a twentieth of the retail price.

Branches of the Russian answer to Poundland, the 36 Rubles (seventy pence) store, are scattered among these markets, selling anything and everything that can’t be found on the stalls. Beggars sitting between the venders hope for dropped change, watching as locals barter for extra deals and take whole roasted chickens for 170 rubles, £3, home to cramped flats, in which two rooms, decorated with the mismatched left-behinds of soviet wallpaper, are inhabited by families of five or six, the left-behinds of the soviet proletariat.

Despite being a common feature in the lives of Moscow’s poorer inhabitants, the markets are worlds away from the city’s wealthiest, who prefer imported western-style luxuries, shopping for clothes in designer department stores such as Gum, the temple to consumerism located directly opposite Lenin’s tomb on Red Square. However, the garments sold through these stores cannot be kept on the premises and have to be ordered in for customers, due to fear of the violence inspired by the sight of such ostentatious wealth in the lower ranks of the city’s population.

Supermarket chain Azbuka Vkusa accommodates for the dietary needs of Moscow’s elite, offering necessities such as boxes of Special K cereal sold for an unbelievable 550 rubles, or £11. These slices of the western dream are then chauffeured back to the housing compounds which, complete with armed security guards, house the upper end of Moscovite society in comfortable, modern apartments.

Security guards are ubiquitous in Moscow, patrolling compounds, watching shoppers in the mall, making their presence felt on street corners and in metro stations. Often privately hired by independent companies, they are responsible in all corners of the city for guarding the divide between the haves and the have nots, making the former feel secure, and intimidating any thoughts of dissidence out of the latter. As the upholders of entrenched inequality, they serve as constant reminders that the fall of communism has thrown any hope of Russian egalitarianism into darkness.