An imagined place or state of things in which everything is perfect. The word was first used in the book Utopia (1516) by Sir Thomas More. 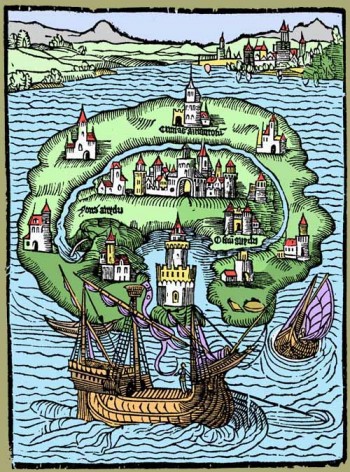 Influenced by transcendentalism, and hoping to escape the confines of capitalist life, George Ripley set up Brook Farm in 200 acres in West Roxbury, Massachusetts. The Brook Farmers believed that by sharing the workload of the farm, and living in harmony, they would be left with time to enjoy intellectual and cultural pursuits as they wished. Prominent transcendentalists such as Ralph Waldo Emerson visited the farm, and the school attracted students from as far away as Cuba and the Philippines. However, while all members took part in manual labour, the farm struggled to make money from its agricultural produce. A small pox outbreak in 1845, and a fire in 1846, accompanied by growing dissatisfaction amongst community members at Ripley’s attempts to introduce stricter, Fourier-inspired rules, lead to the community’s dissolution.

Founded by John Humphrey Noyes, the Oneida community believed that Jesus had already returned in the year 70, making it possible to bring about his perfect kingdom themselves. The community, which had 300 members at its peak, practiced “complex marriage”, where everyone was married to everyone else, and children were reared communally away from their parents. A selective breeding program called “stirpiculture” was introduced in 1869. The community fell apart when Noyes attempted to hand his leadership over to his agnostic son Theodore, and then fled to Canada to avoid being charged with statutory rape. Oneida’s business ventures far outlived the community – they began manufacturing silverware in 1877, and Oneida Limited is still a successful distributor of cutlery today, though it ceased manufacturing itself in 2004.

Inspired by Ayn Rand, libertarian Werner Stiefel dreamed of a stateless community, a “Galt’s Gulch” somewhere on the world’s oceans, outside of any political jurisdiction. He purchased a motel Saugerties, NY, as the first stage, Atlantis I, inviting libertarians to come and live there to help him realise his ideal. A reinforced concrete ship, Atlantis II, set sail in 1971, from the Hudson River south into the Caribbean, where it was destroyed by a tropical storm. Undeterred, Stiefel tried creating an artificial island, only to be shot at by a gunboat belonging to Haitian dictator “Papa Doc” Duvalier. He then bought a submerged seamount between Cuba and Honduras and towed an oil rig there, only to have it blown out to sea by a hurricane. Stiefel finally tried to negotiate sovereignty of an island he’d bought from Belize, giving up only when old age and bureaucracy overwhelmed him.

Another libertarian dream, the Republic of Minerva was the brainchild of Nevada real-estate millionaire Michael Oliver. Given the shortage of unclaimed islands, Oliver decided to create some, with the added incentive that, under international law, islands outside a country’s territorial waters can only be claimed if they are at least a foot above the high tide mark. The Minerva Reefs, 260 miles southwest of Tonga, being submerged at high tide, seemed ideal. After dredging sand onto the reefs, the Republic of Minerva was proclaimed on January 19th 1972. Tonga, however, wasn’t having any of it. Sources report that the Tongan landing party was sent with a brass band, whose job it was to play the Tongan national anthem while the flag of the Republic of Minerva was taken down.

Otherwise known as the People’s Temple Agricultural Project, Jonestown was set up as a “socialist paradise” on 3,800 acres of leased Guyanan land by Jim Jones, leader of the People’s Temple, a group which had been preaching “apostolic socialism” in the US since the early 1950s. After 15 members of the Temple said they wished to travel back to the US with visiting congressman Leo Ryan on November 18th 1978, the paranoid Jones ordered the community to commit “revolutionary suicide”, an act which had been rehearsed before. All but two of 909 Temple members died of cyanide poisoning, including over 200 children. Survivors reported seeing mothers injecting cyanide into their babies’ mouths.