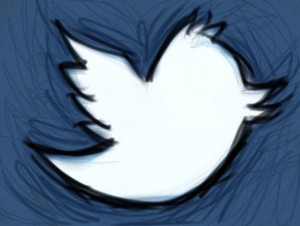 Since 2007, the press have flaunted, hyped and heartily embraced Twitter, the “micro-blog” platform that began as a start-up in 2006. There are newspaper articles examining Twitter’s effects on language, politics, and media; hysterical interviews about the dangers of Twitter’s penchant for producing sound-bites of thought; CNN and other national news networks regularly read tweets during live broadcasts, either in response to a pertinent question asked earlier in the show or to provide an eyewitness account of an event. Publications collect readers’ tweets about current content and print them in the physical pages of that week’s issue as commentary, a peculiar phenomenon that divorces the tweets from their context and strands them in the analog world, without the instantaneous connections that explain and elucidate them on Twitter. Activists tout Twitter as the 21st century revolutionary’s essential tool, and the site has played a role in protests from Egypt to Syria to Wall Street. The Chinese government thinks Twitter so threatening that the site is banned there. Twitter’s growing presence in our daily lives isn’t imagined or inflated, either, it’s real: in late 2008, Twitter’s popularity soared from less than 5 million users to more than 100 million in 2010, and it continues to expand.

“As with new technologies throughout history…Twitter’s rise has been accompanied by much public handwringing over its potentially disastrous and dumbing effects.”

As with new technologies throughout history, from the printing press to the telephone to text messaging, Twitter’s rise has been accompanied by much public handwringing over its potentially disastrous and dumbing effects. Noam Chomsky said that Twitter “tends toward superficiality and draws people away from real serious communication” and that “it is not a medium of a serious interchange”, and the actor Ralph Fiennes commented in an October 2011 article that because of Twitter, “Our expressiveness and our ease with some words is being diluted so that the sentence with more than one clause is a problem for us, and the word of more than two syllables is a problem for us”. The author J.D. Davidson accused Twitter of causing current English vocabulary to shrink: “You only have to look on Twitter to see evidence of the fact that a lot of English words that are used say in Shakespeare’s plays or PG Wodehouse novels are so little used that people don’t even know what they mean now”. It should be noted that none of these critics actually use Twitter themselves.

Is Twitter killing the English language? The answer, for anyone familiar with the scope of history or the patterns and truisms of linguistics, is a resounding and obvious no (Chomsky should know better). Nor is Twitter an arbiter of “superficiality”, syntactic simplicity, mental degradation, or vocabulary decline. Twitter is no guiltier of these sins than ordinary conversation is, and though its arbitrary 140 character limit certainly affects the language people use on it, this does not mean that they are discarding complex words in favor of lazier alternatives or are substituting inane thoughts for brilliant ones just because they won’t fit. In fact, the opposite might be argued.

The restrictions of Twitter actually engender linguistic creativity, forcing the invention of new words, syntax, and grammar. No one would argue that the restraints imposed by the strict rules of a sonnet or a haiku are also strict restraints on innovation. And Twitter might even be more welcoming to ingenuity, because as an emerging medium, it is not subject to universally agreed upon rules. There are few widely accepted standardizations on Twitter. This makes it very idiosyncratic; it is a jungle of colloquialisms, slang, variant spellings, and personal tics. People on Twitter tend to express themselves as themselves, without fear that their words will be scrutinized for “correctness”. But this freedom is not a sign of a looming linguistic apocalypse. Instead, Twitter’s wild-west ethos supports a culture of individual and often inventive discourse.

“The format encourages and rewards the funniest, snarkiest and cleverest. It is essentially a global linguistic popularity contest driven by rapid-fire bursts of words.”

Twitter is a place where “comedians are kings”. The format encourages and rewards the funniest, snarkiest and cleverest. It is essentially a global linguistic popularity contest driven by rapid-fire bursts of words. Salman Rushdie recently took to Twitter to pen a cheeky limerick about reality star and chronic attention seeker Kim Kardashian’s quickie marriage, featuring the alliterative lines, “The marriage of poor kim #kardashian/ was krushed like a kar in a krashian/ her kris kried, not fair!/ why kan’t I keep my share?/ but kardashian fell klean outa fashian”. Twitter is teeming with word play, irony, biting, teasing sarcasm, and a cacophony and range of voices that can’t be matched inside of geographic or physically constrained borders.

The historian Geoffrey Hughes has said that in the dawn of the printing age, words “traveled at speed across continents”. Never has been this so true as now, and at a rate that was once unimaginable, with Twitter leading the charge.