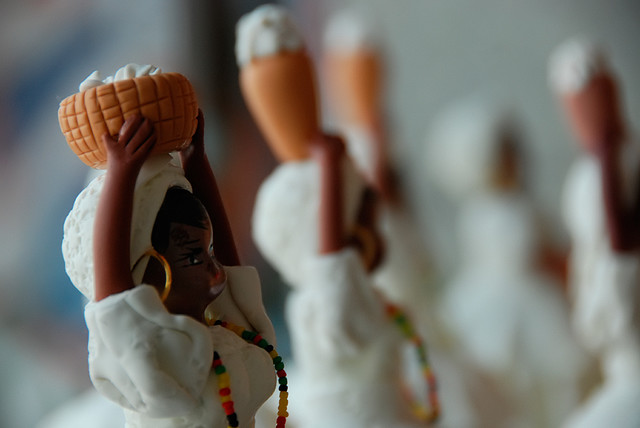 It is Sunday morning in Salvador, a city in Brazil’s northeast, and morning mass is just ending. The sun beats down as worshippers stream out of one of the city’s many baroque churches. The crowds—descendants of settlers who came here to build a new world and of the slaves brought in to do it—walk down narrow streets, past colourful houses, and down to the city’s golden beaches.

After having just left one service, these worshippers promptly begin another—this time to Yemanjá, goddess of the sea. As drums begin to beat to an energetic rhythm, the worshippers’ excitement mounts, and the women, in their white clothes and gold jewellery, begin to dance. They sway back and forth, singing chants and incantations, and wade into the clear water as they do so. One by one, eyes glazed over, they begin to shake, convulse and collapse, falling into trances. The chanting continues, the tension rises, and more and more people succumb, overwhelmed by the forces at work.

This rather unusual juxtaposition of Catholicism and animistic rituals is a core element of Afro-Brazilian religions, namely Candomblé and Umbanda. According to Paul Christopher Johnson, author of Secrets, Gossip, and the Gods, Candomblé developed in the northeast of Brazil soon after the arrival of slaves, and Umbanda later, in urban Rio de Janeiro of the 1920s. These religions, defined as ‘possession cults’, center on the possession of mediums, known as cavalos—or ‘horses’ in Portuguese—who are ‘ridden’ by orixás. The orixás are forces of nature, originating from traditional West African beliefs, which descend from the sky. According to Johnson, the orixás take control of the bodies and minds of the mediums and leave them in trances and fits of convulsions.

“It is not uncommon to see someone before a statue of St. George or St. Barbara, only to discover they are in fact shrines to Oxossi or Iansã, the orixás of the forest and wind”

According to Johnson and Roger Bastide, author of The African Religions of Brazil, Candomble and Umbanda were formed through a process of syncretism: the fusion and assimilation of different, even opposing, ideas into a unified practice. As a result, it is not uncommon to see someone before a statue of St. George or St. Barbara, only to discover they are in fact shrines to Oxossi or Iansã, the orixás of the forest and wind.

According to Bastide, originally, slaves from West Africa and Angola brought with them their ancient beliefs in the orixás, such as Oxalá, who represents the sky, and Yemanjá, the sea. Due to the suppression of their traditional beliefs and forcible conversions to Christianity, slaves hid their beliefs behind the mask of Christian figures and concepts. This began the process of syncretism. According to Ana Zahira, an academic and active Umbanda mae-de-santo (or priestess), “what began as just a cover was internalised and absorbed” into the workings of the religions. The umbandistas also looked to the salons of 19th century Paris for another unlikely addition to their belief system: ‘Spiritism’, the ideas of the eccentric Allan Kardec, who promoted re-birth and communication with transcendent spirits.

How and why these religions arose is a topic of debate: was it was a Marxist-style opiate—a sigh of the oppressed—or a noble form of resistance, or a search for identity? According to Johnson, following the abolition of slavery in 1888, the old records of the slave trade were burned, a supposedly well intentioned but cynical act that succeeded in destroying any knowledge of ancestry for the several million descendants of Brazil’s slaves. The subsequent need for history and identity led to the formation of Nigerian, Angolan and Congolese varieties of Candomblé, in an attempt to re-create a symbolic history for Afro-Brazilians, and a link to their African roots.

In the 19th and much of the 20th centuries Candomblé and Umbanda were viewed as subversive and rebellious and were actively persecuted by police. Once persecution stopped, however, and its practice was no longer restricted to a secret meeting room in a favela on the outskirts of Brazil’s cities, the rituals and ceremonies were opened to the general public and absorbed into the consciousness of the country. Once frowned upon by the intellectual elites of Brazil, the same figures now embrace the religions as a symbol of their national unity.

This newfound public acceptance has enabled these religions to spread. One Umbanda temple that began in Rio now has branches in numerous cities around the world. I spoke to an American woman living in Paris who is a follower of Umbanda. When I asked why she, with no particular connection to Brazil, had become a practitioner, she explained the appeal: “[I]t’s not just sitting there and listening to somebody talk.” The drumming, chanting, and dancing fostered a strong sense of community that she felt our more sober European traditions lacked. Through contact with your orixá, she said, you learn about nature, and by extension, yourself.

“In recent years Brazil has been swept with a wave of Pentecostal Christianity, which is predictably hostile towards Candomblé, Umbanda, and even Catholicism”

Despite the national and international acceptance of these religions in recent years, they are under a new threat. Brazil has traditionally been a bastion of Roman Catholicism, and, despite being separate, the Afro-Brazilian religions have co-existed peacefully. In recent years, however, Brazil, like many other countries, has been swept with a wave of Pentecostal Christianity, which has become hugely popular: in Rio, umbandista neighbourhoods have all but died out, and on streets where beating drums could once be heard, you now see lines of straight-laced young men, dressed in shirts and ties, marching dutifully past and proclaiming redemption and the forgiveness of sins.

These hard-line Pentecostals are predictably hostile towards Candomblé, Umbanda, and even Catholicism. The mae-de-santo I spoke to described Pentecostalism as a “threat” to her religion, breeding a fundamentalist mentality that undermines the plurality of these rather unique and distinctly Brazilian faiths.

It is a shame that single-faith dogmatism is threatening this culture and identity. Once truly a religion of the povo, Candomblé may soon only exist as a middle-class pastime. These faiths should arguably be respected, not least for what they reveal about this country and its people. As French ethnologist Roger Bastide remarked, studying Candomblé required him to radically alter his European, post-Enlightenment conceptual framework: in order to truly understand the faith, he had to accept so-called “irregularities” and “contradictions” as the very bread and butter of his work.