It’s an overcast day in the Northeast London’s Stamford Hill. As is always the case in this area, the Jewish population is strikingly visible: sidelocks swing by beneath black wide-brimmed hats, and pale young mothers push old-fashioned prams in long dark coats. Stamford Hill is home to the largest Jewish orthodox community in Europe, a fact which is ironic considering my reason for being here – I’m on my way to meet two members of a group defined by its staunch opposition to the state of Israel.

Rabbi Cohen and Rabbi Galandauer are both part of Neturei Karta, an ultra-orthodox and fiercely anti-Zionist Jewish sect. From the outside, the Victorian end-of-terrace house where I’m due to meet them looks shabby. Rusty pipes and a dirty white extractor fan adorn the outside walls, and the pale blue paint that covers the pebbledash is beginning to peel. But as Rabbi Galandauer welcomes me in, the jovial family atmosphere inside immediately assuages any misgivings. There has been a wedding, and smartly dressed children wearing kippahs run around as a pleasant smell of fried onions wafts from the kitchen into the hall. I’m swiftly ushered into a small room with rows of leather-bound books for walls and a table in the centre. Here, Rabbi Ahron Cohen is waiting for me. He is tall and old, with a long flowing white beard and the reassuring aura of benevolent wisdom that can be expected of a man who has dedicated his life to the spiritual. 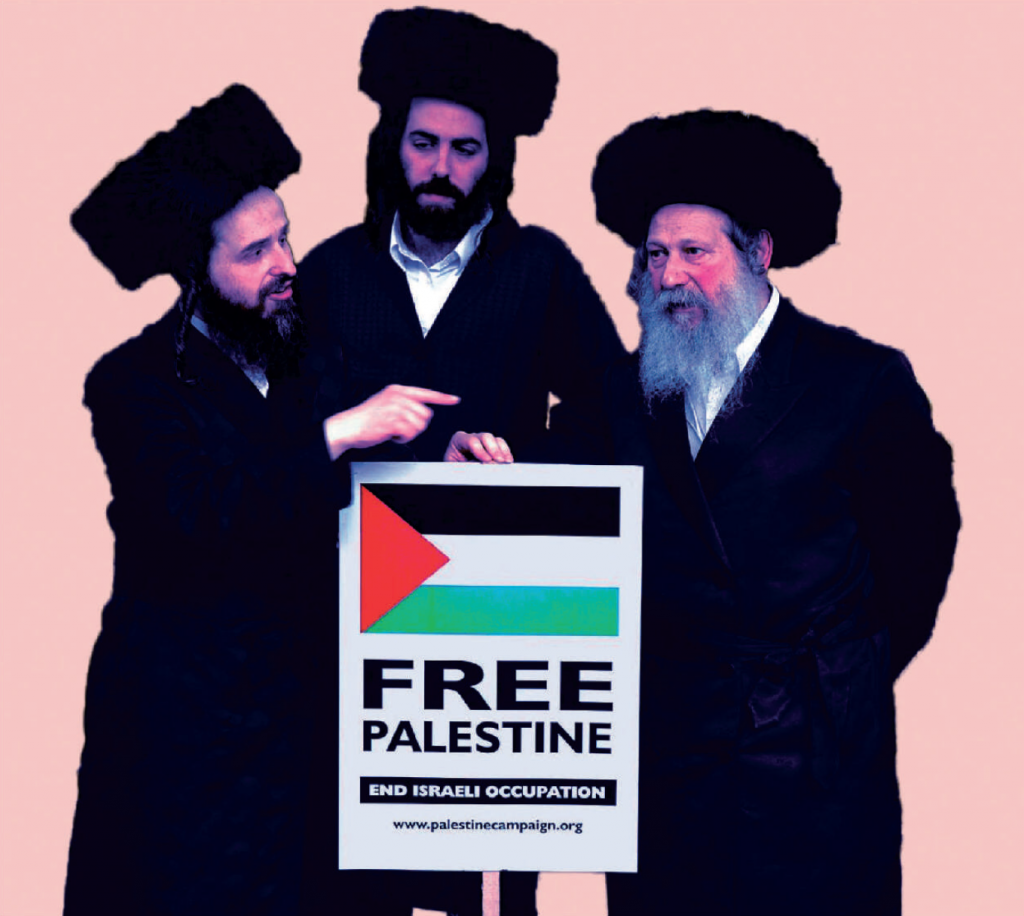 For forty years Cohen has been preaching the opposition of Orthodox Judaism to Zionism. According to Cohen, mainstream Judaism wandered down the wrong path during the 20th century, and as small and isolated as the Neturei Karta are, they are the ones keeping the true faith. “The whole idea of wanting to form a state of our own by our own hands is contrary to Jewish teaching. Jews are in a divinely decreed state of exile, and we have to accept that. To try and go against that is a rebellion against the wish of the almighty.”

Neturei Karta (meaning “guardians of the holy city” in Aramaic) was established in 1938 when the Jews who had been living as a minority in Palestine for thousands of years became wary of the mounting pressure to establish an official Jewish state. It is not a formal organization, but rather the name given to those who believe and openly propagate the idea that an official Jewish homeland cannot come into being until the return of the Messiah.

The theological foundations of Neturei Karta have not stopped it from allying itself with the political campaign for Palestinian liberation. Cohen tells me that apart from the explicit violation of scripture that Zionism represents, its “colonialism, and all that it brings with it – the loss of life and the oppression – constitute a profanation of God’s will”. This sounds reasonable enough. But part of me is sceptical of their commitment to fighting oppression. Believing in the rights of Palestinians generally forms part of a wider humanist worldview that seems difficult to square with the inherent conservatism of ultra-orthodox religion.

At this, the corner of Cohen’s mouth twitches into a wry smile. “Our aim is not human rights, it is doing God’s will. God’s will – and this is a difficult thing that not everybody agrees with – isn’t always at one with what people think.” The fact that those involved with the human rights-driven Palestinian liberation movement often fail to understand that Neturei Karta’s theological identity doesn’t matter to the group. Cohen states confidently that “they don’t need to understand”. He goes on, “Zionism has caused both a profanation of God’s name and a loss of life. By associating ourselves with the liberation movement to the degree that we say we understand what their problem is, we can counteract those two things.”

“Our aim is not human rights, it is doing God’s will.”

Even if there is something in the Neturei Karta trying to further their theological ends by marketing them as political ones, it is clear that Cohen feels genuinely ashamed of Judaism’s association with “the stain” that he calls Israel. He constantly reiterates the importance of showing the world that “Zionism is not Judaism”, and it is this strength of feeling that has led to the movement’s extreme approach to publicity. Often they can be seen at pro-Palestine events, leading marches and even burning Israeli flags.

Such behaviour has contributed to their pariah status amongst the mainstream British Jewry. In the past they have been condemned or dismissed by the Chief Rabbi, the Board of the Deputy of British Jews and leaders of the British Reform Synagogue. One particular event raised the infamy to a climax. In 2006, Neturei Karta made news when a delegation of Rabbis – including Rabbi Cohen – attended a Holocaust Review Conference in Tehran. The conference was attended by several prominent Holocaust deniers and the presence of Neturei Karta, coupled with some of their acts there (such as being photographed hugging and kissing President Ahmadinejad), outraged Jews around the world.

When I ask Cohen about the event, he tells me that their aim in attending was to condemn the use of the Holocaust as a justification for the state of Israel, and that he explicitly acknowledged that the Holocaust took place in his speech to the conference. Ultimately, he says, “it was a high profile event and the message got spread”. I ask how it felt to have alienated so many people in his own community, and Cohen admits that “it is sad” but quickly dismisses the outrage as having “no logical basis”. At this point, Rabbi Galandauer interjects, “we’ve got to counteract years of Zionist propaganda so to convey our message often takes an enormous amount of time and a lot of explanation. 100 million Muslims were watching this one high profile event on television and they saw Ahmadinejad, who is supposedly the biggest anti-Semite in the world, hugging and kissing Rabbi Cohen; at that point, there was no explanation needed – all the Muslims who were watching realized that there are Jews who they are not supposed to be against.”

It is hard to tell whether their approach to PR is the product of shrewdness or naivety. I suggest that when people see a photo of a Jewish Orthodox Rabbi hugging Ahmadinejad, the sheer absurdity of that image may undermine their attempts to convey a serious message. “Absurd to whom? It was absurd to Westerners but so what? Westerners aren’t the ones who have a problem with us; the Muslims do, and as Rabbi Galandauer said, the images went out to 100 million Muslims.”

Cohen is also keen to point out that many religious Jews are actually sympathetic to their cause. He repeatedly states a distinction between authentic religious Judaism and the nationalistic, secular ideals upon which Zionism is founded, claiming that “the vast majority of orthodox Jews would not be distraught if the state of Israel was dismantled”. According to Cohen, what really separates the Neturei Karta and the rest of the orthodox community tends not to be theological disagreements, but rather Neturei Karta members’ decision to, as they refer to it, ‘come out’ and publicly proclaim their anti-Zionism.

There are however, many orthodox Jews who have bought into Zionism, and Cohen talks about this with genuine sadness. “These orthodox, or so-called orthodox, Jews who have adopted Zionism have simply been impressed, affected and infected by the secular nationalistic ideal of Zionism. And because they’re orthodox they have to find some religious rationalisation for what they do, so they have falsely interpreted various teachings within the Jewish faith to reach the conclusion that Zionism is approved of by Judaism.”

Predictably, the complex relationship between Jewish theology and Zionism is most evident in Israel. Here, the government provides generous concessions for an Orthodox population that is often ambivalent about its legitimacy. Even the openly anti-Zionistic members of Israel’s orthodox population accept the tax-breaks, benefits and exemptions from national service on offer from the government. Rabbi Cohen is characteristically diplomatic on this subject. “There are many who live there out of force of circumstances. It’s very, very hard to uproot and come away so I give them the benefit of the doubt.”

In the eyes of the majority of the Jewish community, they are viewed as little more than an eccentric novelty with a penchant for the gratuitously offensive

When talking to the rabbis, I am struck by how reasonable they seem. Words like ‘ultra-orthodox’ and ‘sect’ connote something very different to the level-headed lucidity of Rabbis Cohen and Galandauer. They have a well-founded argument and in a conversational context at least, they argue it convincingly. However, in the eyes of the majority of the Jewish community, they are viewed as little more than an eccentric novelty with a penchant for the gratuitously offensive. So what explains the disconnect between the reality of Neturei Karta and how they are perceived?

Perhaps the self-contained nature of the community and the emphasis it places on solitary study has left them less assured at navigating the modern world with its sensationalist media, hungry for heroes, villains and weirdos. Galandauer agrees that Orthodox Judaism does not lend itself to the rigours of campaigning. “The Zionists were politicians and had a media, and [they] have got all the tools to further their cause, whereas the religious Jews have never been prepared for such a battle.”

Given that this is the case, I wonder how they see the future of the movement. Would they consider pursuing political avenues? No: “Politics is the art of the possible,” says Cohen, “it’s about compromise. We are religious people; we are spreading the word of God and there is no compromise in that.” This unwillingness to compromise is reflected in the group’s refusal to accept Israel’s right to exist, a concession made by the Palestinian Liberations Organisation in 1988. Such unwavering conviction may have one them more enemies than friends, but in person at least, it is impressive. “One thing is certain,” Cohen assures me, “Zionism and its state will come to an end. Falsehood cannot last.”