In early 2011, Damascus was witnessing the rise of a revolution. The world was beginning to notice a rebirth occurring in the Syrian capital and from all corners of the globe, it was being watched with a wary eye. Art had seized the city and the force of this renaissance was reverberating far beyond its ancient walls. People were flying to Damascus to buy art, and Syrian artists were being flown out to exhibit their work in New York, Paris and London. The renaissance thrived in its youth, until suddenly, it was to meet a premature end at the break-out of another, more heated revolution. Paintbrushes are no match for firearms and as we were deafened by coverage of bombings, airstrikes, ISIS videos and refugee debates, we became blind to Syria’s art.

Isolated from their artist’s circles and exiled from their homeland, the clear voice of the Syrian artist which had been forming was lost. Whispers and murmurs of recovering Syrian artists have fought to be heard in Jordan, Berlin, Greece, Italy and wherever they have found refuge. As time goes on, these utterances coming from different places have found themselves to be telling the same story. The story of pain, frustration and fear for a divided land. It’s time for these voices to be brought back together and sing out in powerful, stirring harmony on the world stage.

In 2017 Syria is still defined by the media storm which surrounds it, an unintelligible noise which churns out footage of ISIS propaganda, air strike debates between governments and endless anxious predictions about the future of the conflict. Unable to find truth or certainty in this storm, let us be silent, and listen to the honest song of the Syrian artist.

A glided golden robe envelopes two intertwined bodies; a pair of lips presses against the serene cheek of a young woman. The lovers are showered in flowers, immortalising this peaceful moment as one of enduring love. Today, they are showered in bullet holes. 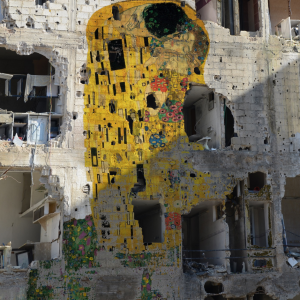 Forced to flee from his home and studio in Damascus at the start of the Syrian civil war in 2011, Tammam Azzam left behind his painting materials and reputation as one of Syria’s key artists. Restless in his exile, Azzam could only watch the developments of the conflict stream through his Twitter feed, increasing in number and devastation every day. Anguished in his powerlessness, he could no longer withstand the despair such destruction caused him. As a substitute for paintbrush and canvas, Azzam adapted to a new medium: digital art.

Freedom Graffiti is a series of digitally-produced works of art which superimposes masterpieces from the likes of Goya, Dali and Klimt onto photographs of his ruined city, Damascus. His photoshopping of Klimt’s Kiss onto a bombed-out building in Damascus instantly went viral. Seeming so much like graffiti, reporters did not initially realise it was a digitally-manipulated image. Once alerted to their mistaken judgement they praised Azzam more profusely than before, now understanding the effect of the detachment that digitally-imposed graffiti creates and how it is representative of the artist’s distance. Azzam’s digital masterpieces came at a time when the world’s attention was moving away from Syria, when images of death and destruction were so common that they had become normalized by their abundance. Although Azzam was recycling those very same images which came from the media, his powerful concept of juxtaposing high art with human depravity is what rendered those images shocking once again. For the first time in the Syrian conflict, we weren’t being subjected to the opinions of a regime spokesperson or an opposition warrior: the honest song of the nightingale artist rang out across the battlefields. And the world listened. 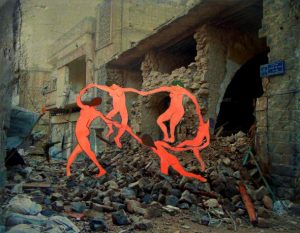 His way of combining love with death, vivid colour with spectral ruins, and beauty with devastation, is so exquisite that it disturbs even the most hardened viewer. Uprooted from its origins of early 20th century Austrian art nouveau, Klimt’s Kiss seems more passionate than ever on wall in Damascus, as the lovers desperately cling to one another for a final, fatal embrace.  The work of Azzam brings to mind that of Francisco Goya and Salvador Dali, who fit seamlessly into the Syrian landscape. Dali expressed the torment of the Spanish civil war through his unsettling surrealist masterpieces and Goya is lauded as a revolutionary in modernising conflict art. All of these artworks have been carefully selected, of course. Their iconic status arrests the viewer with the comfort of their familiarity, only to capsize the viewer with the sense of discomfort of finding it in amongst devastation in a foreign and unfamiliar place. By rooting these masterpieces in depraved soil, their messages of innocence and peace become farcical and tragic in their incongruity, or their messages of war and suffering are enhanced and revitalised. The technique of digital art itself captures the torturous exile of the artist: unable to depict the demise of his country first-hand, Azzam is restricted to recycling photographs from media outlets and to cutting up old masterpieces by other artists. 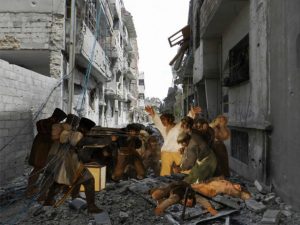 Francisco Goya, The Shootings of May Third, (1814)

There is no doubt that Azzam’s art is concerned with the political dimension of the conflict. He is determined to keep the world’s media spotlight fixed over Syria, instead of restlessly seeking out newer stories elsewhere to maintain the interest of its readership. Azzam is still an active Twitter user.  He takes advantage of his international fame to share updates of the conflict, but he mainly spreads messages of peace. In spite of the unresolvable hatred between the regime and the revolutionaries, and the unabated fury of Islamic State, Azzam insists that the common love of their country should be enough to prevent them from destroying it. Just as the Fraternal Kiss on the Berlin wall mocks the abandoned ideas of equality and brotherhood which produced Soviet Communism, Azzam’s version of Klimt’s Kiss calls for a reminder of the universal love that Syrians have for their homeland.

However, Azzam is realistic about the impact of his artwork in the conflict. In an interview from February 2016 he said  “I believe that art can’t save the country. Bullets are more powerful than art, now. But I believe at the same time that all kinds of culture, art or writing, cinema or photographs, can rebuild something in the future.” Again through Twitter, he often considers the power of political and protest art in a world where anyone who has access to the internet is equal in their freedom to express their discontent. This form of art will continue to define the conflict in Syria and elsewhere in the world, as for the first time in history, any protestor has the voice to address the global audience. Despite the undeniable problems associated with aestheticizing protest by presenting it as art, nothing can prevent the rise of artists like Tammam Azzam and the place they are claiming for themselves in the violent and complex dimension of conflict.