At the Fondation Le Corbusier, brigades of tourists take pictures of empty corners as they shuffle through unfurnished rooms, with blue plastic bags covering their shoes so as not to scratch the floor. Nestled within the heart of the 16th arrondissement in Paris, one of the city’s safest and most affluent neighbourhoods, the foundation honours the legacy of the Swiss architect Le Corbusier, nicknamed “apostle of reinforced concrete”: a legacy at once celebrated and reviled. At the foundation, you can look, but are forbidden from touching, and the whitewashed walls are notably free from information plaques. The innovator of the movement of Modernity, with his love of order, rhetoric of hygiene and contempt for complexity, would surely have been proud.

Le Corbusier’s most ambitious conceptions may never fully have been realised, but his very specific vision of utopia has nevertheless been hugely influential. In his Ville Contemporaine (Contemporary City—1922) and Ville Radieuse (Radiant City—1924) he envisaged the creation of a city whose constructs and organisation would provide all the prerequisites for complete fulfilment and happiness. He conceived of the ideal community as a “machine for living”—for 3 million people—and was convinced that it would be created by designs that placed people in maximally close proximity. Rooms should be open-plan; dwellings should be piled on top of one another in tall towers; and towers should be aggregated to form vertical cities.

The focal point would be a group of six multi-storey skyscrapers built on steel frames. These would be placed evenly between small gardens: “the tower block glittering above the greenery”. A multi-level traffic interchange would ferry people in and out of this centre. 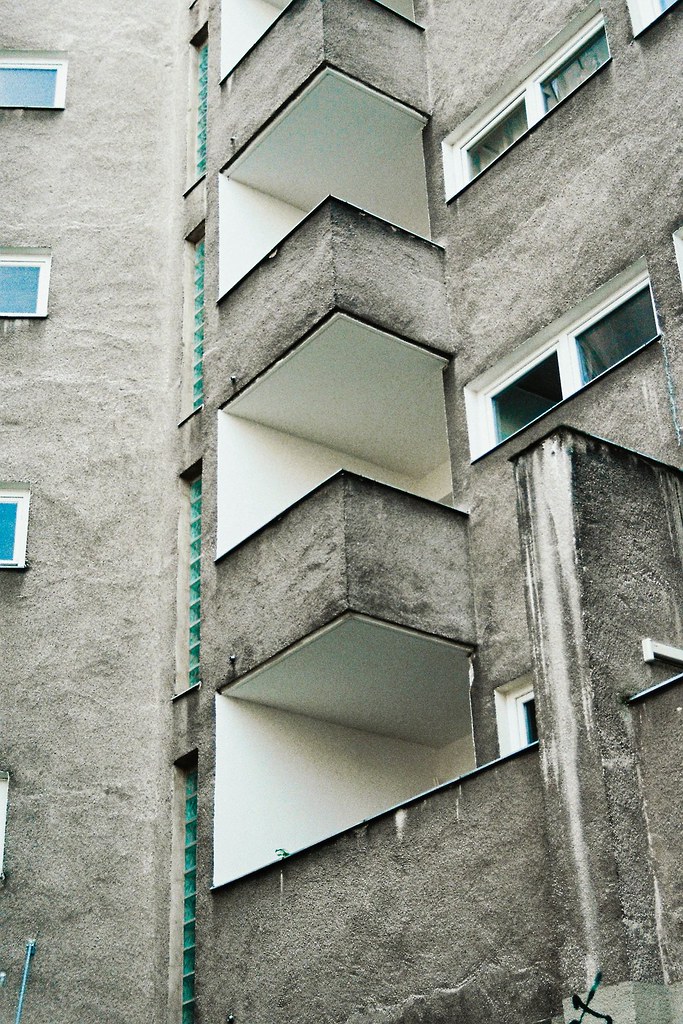 In this city, all elements conducive to a chance encounter with a neighbour would be eliminated and there would be no such thing as ‘next-door’ or ‘across-the-road’. Theatres, churches and civic monuments would exist, but all signifiers would be removed; they would be swallowed within the same homogenous towers as businesses and apartments.

Most strikingly, the proletariat would be placed firmly outside this city, far away from the urban elite: the two areas demarcated by a belt of greenery. The affluent majority would therefore have no need to set foot outside their self-sufficient bubble, while the proletariat would enter only to work. Eight hours in a factory as a contribution to society, so Le Corbusier envisaged.

Despite the fact that these plans were never fully realised, Le Corbusier’s vision was so developed that his critics had reason to be scared. Pierre Francastel, a renowned French historian, warned that it would become the universe of a concentration camp. Le Corbusier must have known what his polemic implied. At the end of an interview with the Communist newspaper L’Humanité, he asked them to include a disclaimer that he was not, in fact, a supporter of the French fascist party Action Française.

Yet flicking through photographs of these models, we can imagine prospective citizens under Le Corbusier’s looming hand, becoming insignificant and subservient to his architectural hegemony; to his delusions of an all-pervasive god-like power. This isn’t far from Le Corbusier’s own fantasies. He believed that only a dictatorial government was equipped to “inaugurate the age of harmony”, and so dedicated the 1935 book on his Radiant City “To Authority”.

To facilitate the birth of these utopias, Corbusian ideology demanded the total demolition of traditional neighbourhoods, complete with everything that might root people in their history, reflect their culture and heritage and give them a sense of belonging to something which transcended their own fleeting existence. Within the plans for his Contemporary City lies a map of Paris. The Marais district—Paris’s diverse cultural centre—is frantically scrawled over, obliterated by a black marker pen. For this was the area that he had designated the ideal site for the adoption of his master plan.

But ironically, it was outside Paris’s Périphérique that town planners, inspired by his vision, sought the embodiment of his dream. The so-called ‘Trente Glorieuses’ (The Glorious Thirty, 1945-75) witnessed the rapid growth of the banlieue, a word that barely needs translation, as its connotations speak far louder than the word itself. 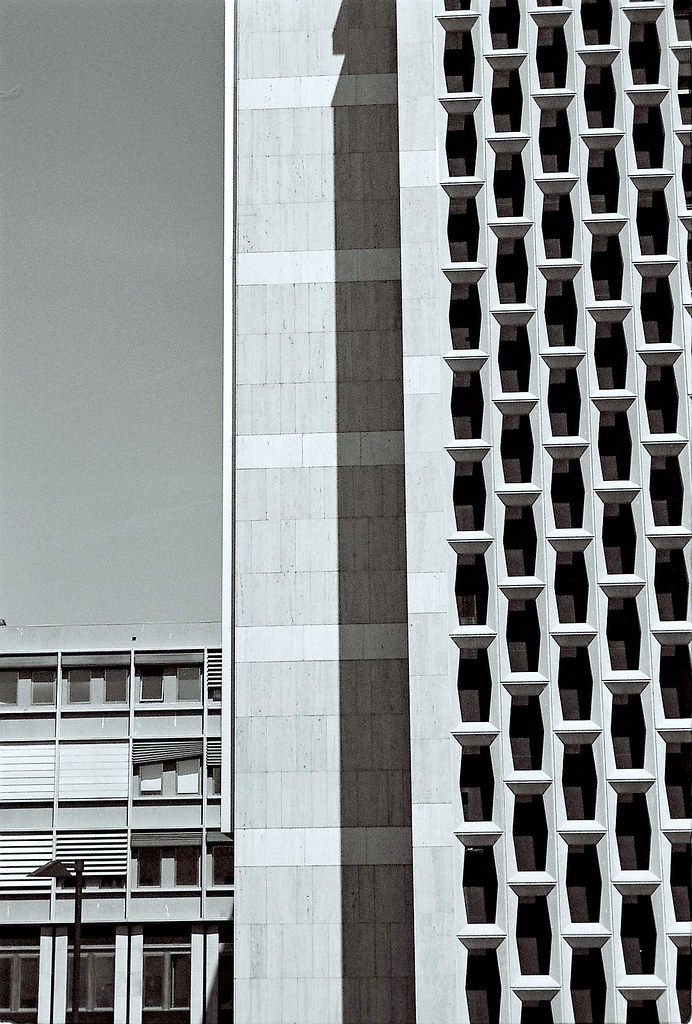 Le Corbusier’s magic number of 3 million was invoked, but instead of compact cities, it was 3 million council properties that were built between 1955 and 1975 to help meet France’s desperate need for social housing. Paradise it was not, and, little by little, those who could find work elsewhere moved out. These areas became zones of relegation, with an unemployment rate 1.5 times higher than that of Paris, and with a predominantly immigrant population.

That which was supposed to be ‘contemporary’ and ‘radiant’ rapidly developed into a ghetto.

In September 2005, riots broke out all over France. Ten days of burning and looting were sparked by an incident in Clichy-sous-Bois, in which two teenagers, sons of working-class immigrants, were electrocuted at a power sub-station while trying to run away from the police. On certain nights of subsequent rioting, as many as 1500 cars were set on fire.

Reports in the New York Times and the Washington Post both made the connection with social housing in their commentary on events: “With unrest expanding through the northern suburbs of high-rise apartments that house some of France’s poorest immigrant populations, senior government officials were debating how to curb the violence,” and “In life, they were uncelebrated. In death, Ziad Benna, 17, and Bouna Traoré 15, have inspired more than ten days of riots that have spread from housing projects in the suburbs of Paris to cities and towns across France.”

In every suburb subject to unrest, the architectural typology was the same. Police refused to patrol. Instead, helicopters hovered in broad daylight. Reporters were threatened by gangs. Nicolas Sarkozy, famously, as President, wouldn’t dare set foot these areas.

The deleterious effects of life in a high rise and on housing estates have been well-documented by the architectural establishment, and by politicians and social commentators in France, as well as elsewhere. In 1997, years before the riots, Pieter Uittenhove condemned the ‘Modern’ architecture in the banlieue as a “space of exclusion.” In the 2007 Architectural Record, Sam Lubell denounced these slab-like apartment buildings, calling them “tinderboxes for trouble,” and advocating intervention to “stave off a sense of alienation and resentment”. And, in a 2007 article in Volume, Steven Wassenaar called for “livable, spatial architecture”.

All three of these commentators rejected the Modernist idealism that had “set itself up as a sort of Noah’s Ark to save civilisation from ruin”. They condemned the exclusive reliance on reinforced concrete, the uniformity of housing units, and the abundance of “towering blank walls framing empty courtyards”. In other words, they identified ways in which this architecture had failed to provide comfortable shelter for the working class in order to “diffuse revolutionary tendencies”. Once regarded as prototypes for housing around the world, these towers now seem to herald violence everywhere; not only in France.

There are reasons why the classical architects built as they did; why their buildings are embellished with cornicing and coving; why we are attracted to capitals and corbels; pillars and pediments, tracery and turrets. They are an expression of, and appeal to, what makes us essentially human – that we strive to enhance our world; to elevate what is functional above the function that it serves.

The rounded forms of domes and pillars reflect the curves of the human body and the forms of the natural world on which life depends. These buildings, with their soft lines and understanding of the horizontal as well as the vertical, draw the eye to marvel at their intricacy and are in harmony with the environment in which they stand; they embrace those who survey them, rather than standing over and in opposition to them, rather than intimidating and repelling.

It is difficult—perhaps impossible—to disentangle cause and effect. To what extent is the environment in which the inhabitants of the banlieue live responsible for their alienation? Residents are already hugely disadvantaged and consigned to the periphery of society, but it seems impossible to deny that the sterility of their living conditions reinforce and entrench their estrangement, rather than providing any form of comfort and consolation; anything which might elevate the spirit.

Corbusier’s dream—his dedication to the high-rise block, and, particularly, to the rigorous separation of affluent and impoverished—has spawned a pernicious apartheid, largely unseen by tourists and visitors to the Fondation Le Corbusier. This separation lurks in and around that city of dreams, the city where he lived and worked: Paris.